Abu Dhabi's stunning Grand Mosque
One of the Middle East’s best kept secrets can be summed up in one brand name: Rotana.

The hotel group has limited exposure outside the United Arab Emirates (UAE) but, having stayed in four now, the latest three in Ras Al Khaimah and Abu Dhabi, I can only speak well of my experiences.

It has properties in Saudi Arabia, Qatar, Turkey, Bahrain, Bosnia, Congo, Egypt, Iraq, Jordon, Lebanon, Morocco, Oman and Tanzania, but has an undoubtedly strong association with the UAE where it is widely respected by many travellers.

So, when the Ras Al Khaimah Tourist Board invited me north for a few nights, it was the perfect opportunity to also check out two more Rotana hotels further south in another of the seven emirates.

Glitzy Dubai may well be home to shopping malls that leave you open-mouthed, but Abu Dhabi is its affluent neighbour widely regarded as ‘head office’ for the UAE: possibly more sophisticated than the other six emirates perhaps but, certainly, the one with the deepest pockets.

Even now, as the world talks of recession, shortages and rising oil prices, it is as if Abu Dhabi carries on unabated and untouched by the economic vagaries of the wider world.

Cranes still abound and, as if by magic, an entire underground souk and visitor centre has appeared since my last visit in 2018, now administering tourist arrivals to the breathtakingly beautiful Sheikh Zayed Grand Mosque. 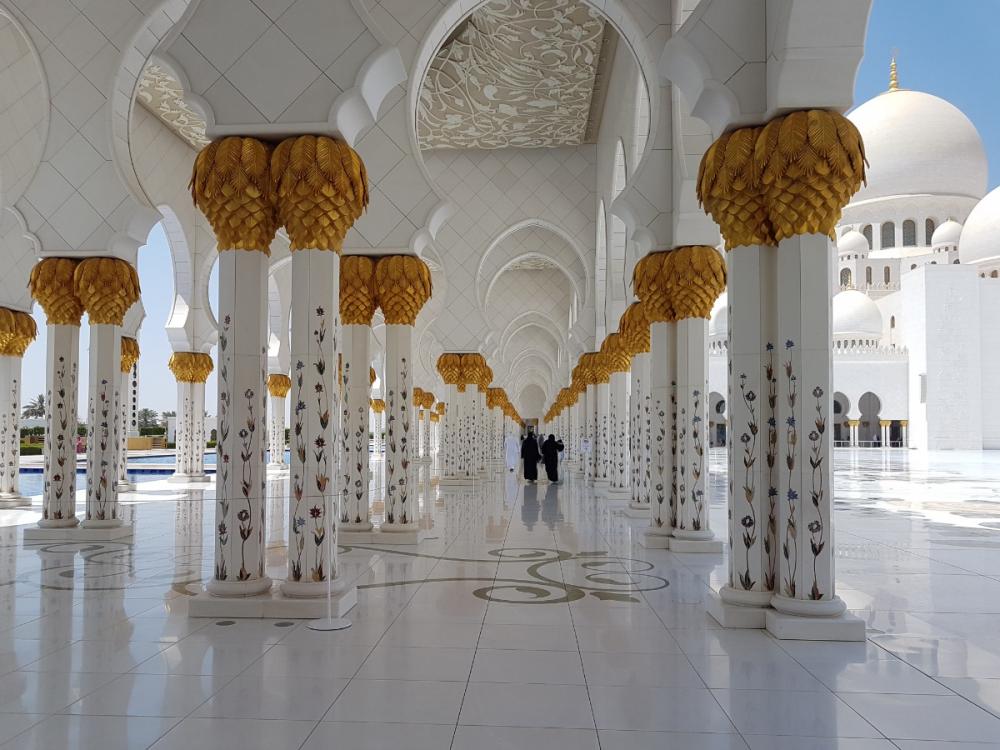 Big Bus Tours has built a business around Abu Dhabi’s continually emerging tourist sector, carefully linking up a raft of the emirate’s must-see attractions, so that visitors now have a seamless way of getting round this sprawling city state 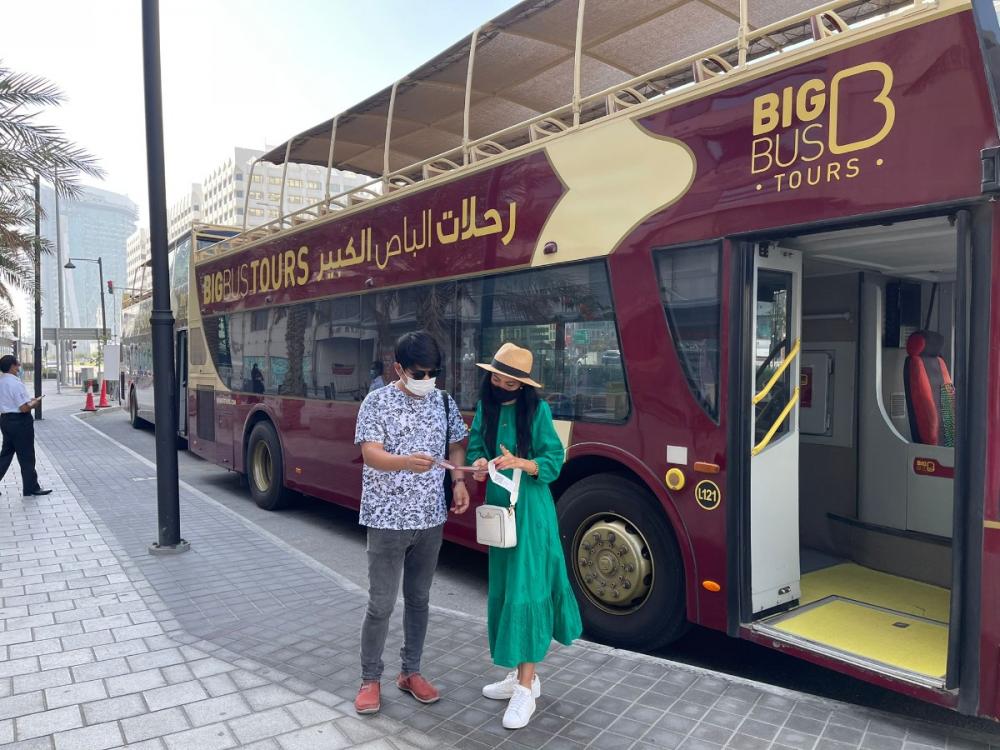 ...the amazing Louvre, Emirates Palace Hotel, Heritage Village, Founder’s Memorial and, of course, Grand Mosque, the latter requiring an extended journey on the ‘green line’ in order to reach.
The luxurious Emirates Palace Hotel
However, stay at the Park Rotana and you have one added advantage: you can walk to the Grand Mosque which, at worst, is 20 minutes away!

Equally the Saadiyat Rotana Resort & Villas, a 30-minute taxi ride from the Park Rotana, is within minutes of the Louvre; both have their geographic advantages. 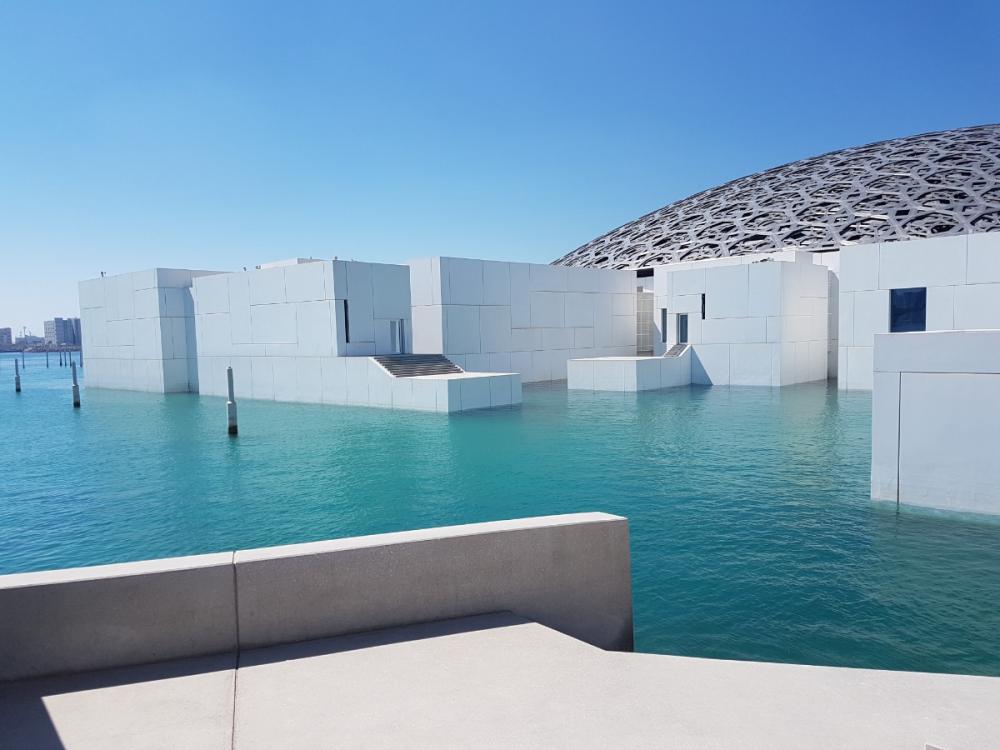 Maricel Gonzales-Centeno has been Marketing Director at the Park Rotana for more years than she probably cares to remember, however, this Filipino born lady is the epitome of customer service and left me laughing out loud when I walked into my 9th floor suite.

There on the bed were two lifesize cross-legged ‘humans’ made from towels, each sporting a cut out face: one of me and one of my wife. 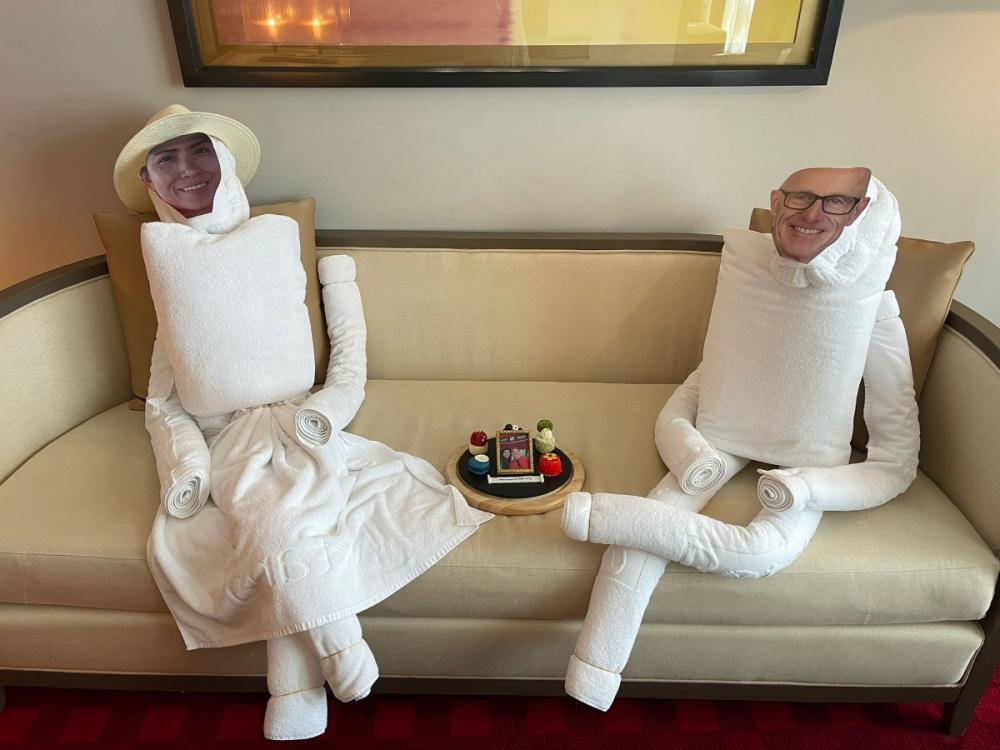 Nearby was a photo from our 2018 visit made out of edible chocolate! Both took my breath away because someone had clearly gone to such lengths to create a customer care experience that genuinely left us amazed: how could they have retained our photos from four years ago and done this? Or did they download them from our Facebook profiles?

“We are a five-star business hotel,” said Maricel, “so we have to be customer focussed at all times, certainly when we have the hotel as well as Park Arjaan by Rotana, our deluxe serviced apartments and Park Residences, our unfurnished rental offering.” 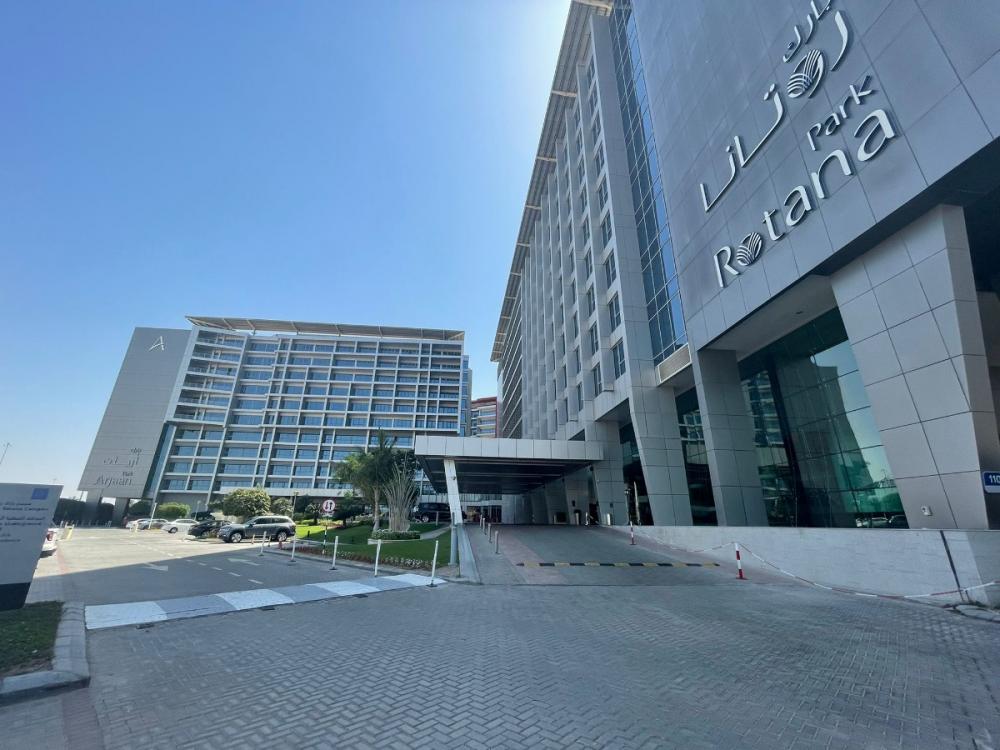 The main city centre is only a 20-minute cab ride, as is YAS Island with its Waterworld, Ferrari World and Warner Bros theme park offerings. Even the motorway to Dubai can be seen from the hotel, making commuting to the shopping capital a simple day trip.

A multi award winning hotel, the Park Rotana has the usual suspects: a lovely pool and health centre but, added to its armoury, is Ginger’s, the more casual food offering….. 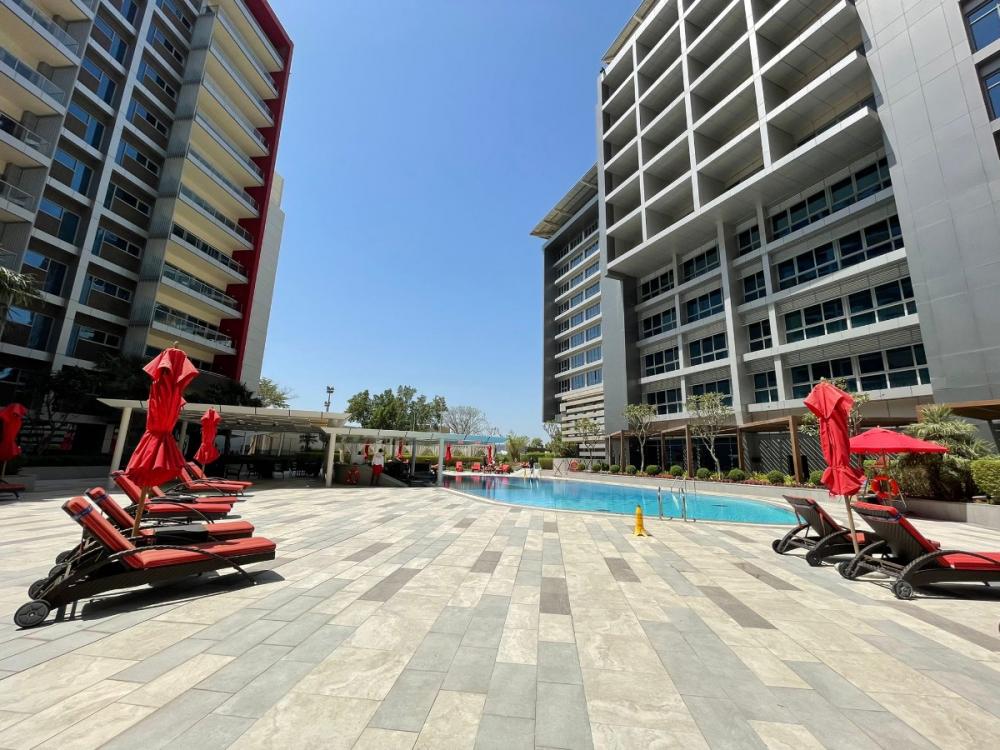 Cooper’s Bar and Restaurant and, the cordon bleu cookery of the exceptional Teatro 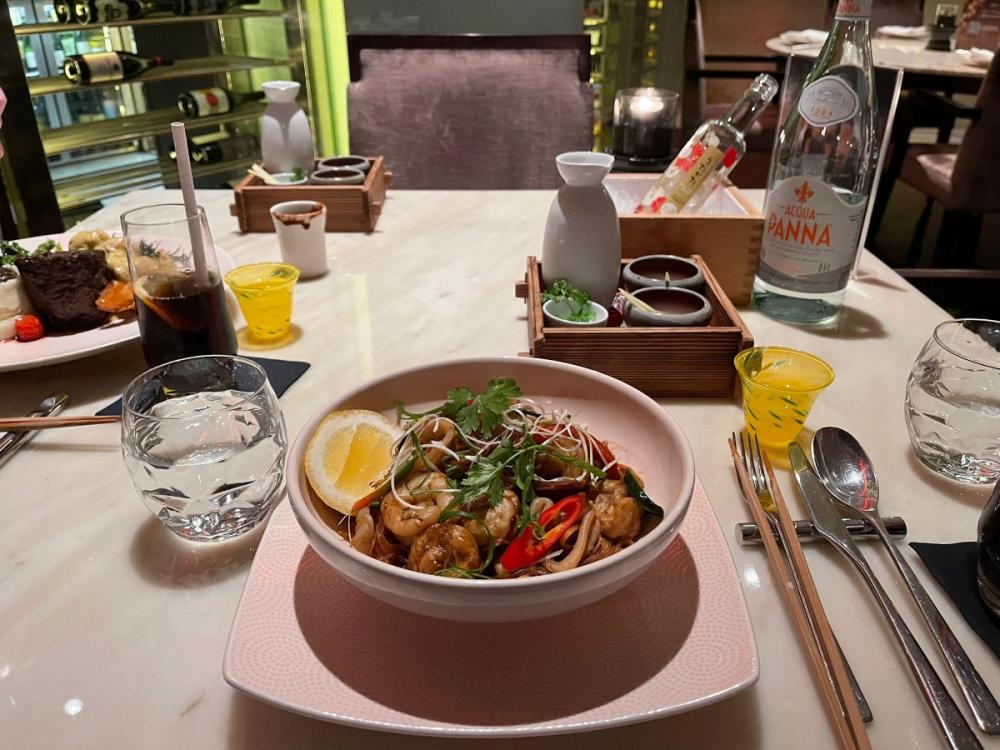 Meanwhile, the Louvre’s near neighbour is the Saadiyat Rotana Resort & Spa. If a picture paints a thousand words then check out the following video!

Hamilton’s Gastro Pub will give you not so much a slice of little England but, perhaps, the feel of a sophisticated London watering hole, while the Nasma Beach Bar serves to remind you that a panini in a sunny climate surrounded by a private beach and stunning swimming pools, will always be preferable to a panini in Pudsey where the weather is a tad cooler most of the year! 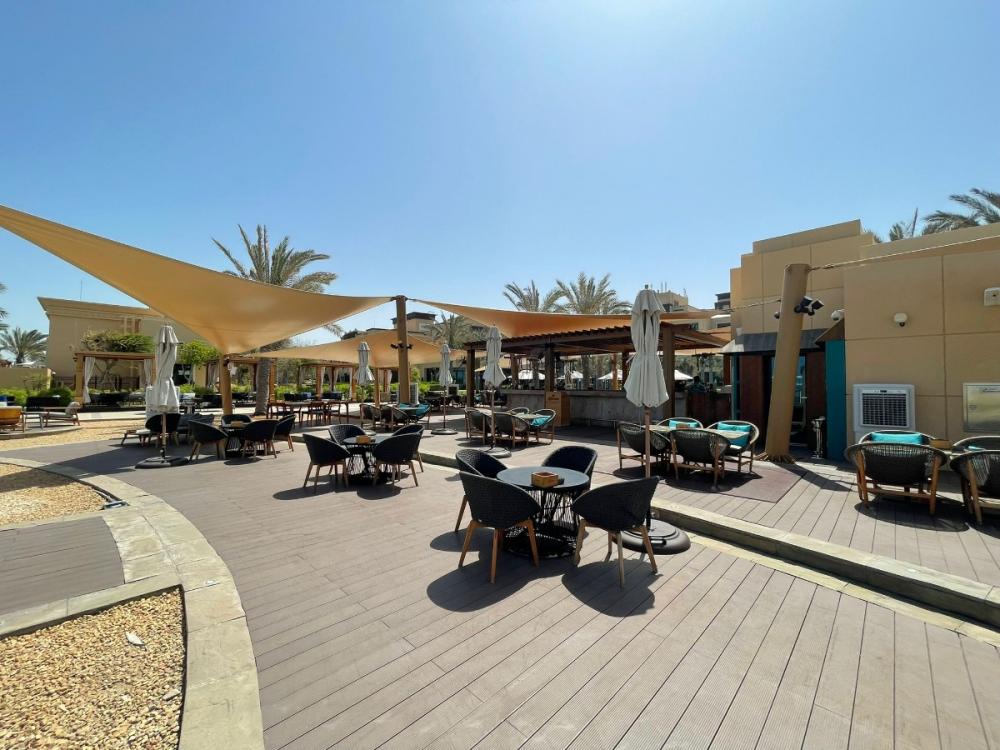 Unlike the Park Rotana, the Saadiyat has a stronger tourist focus. “It is a resort hotel,” said the bikini-clad lady next to us at the Nasma Beach Bar. Her son and his two friends had been talking in three languages simultaneously and, intrigued, I had struck up a conversation.

“They speak French, Arabic and English,” grinned mum as if it were the most normal pastime in the world. She was also happened to be the wife of one of Rotana’s senior management team and had been to numerous hotels.

“I know my husband works for Rotana,” she said, “but it is an exceptional brand and all the hotels are equally good.” But she would say that wouldn’t she? However, up to that point – with four Rotana properties under my belt – it was hard to disagree.

The Turtle Bay Bar & Grill beckoned us for an evening meal….. 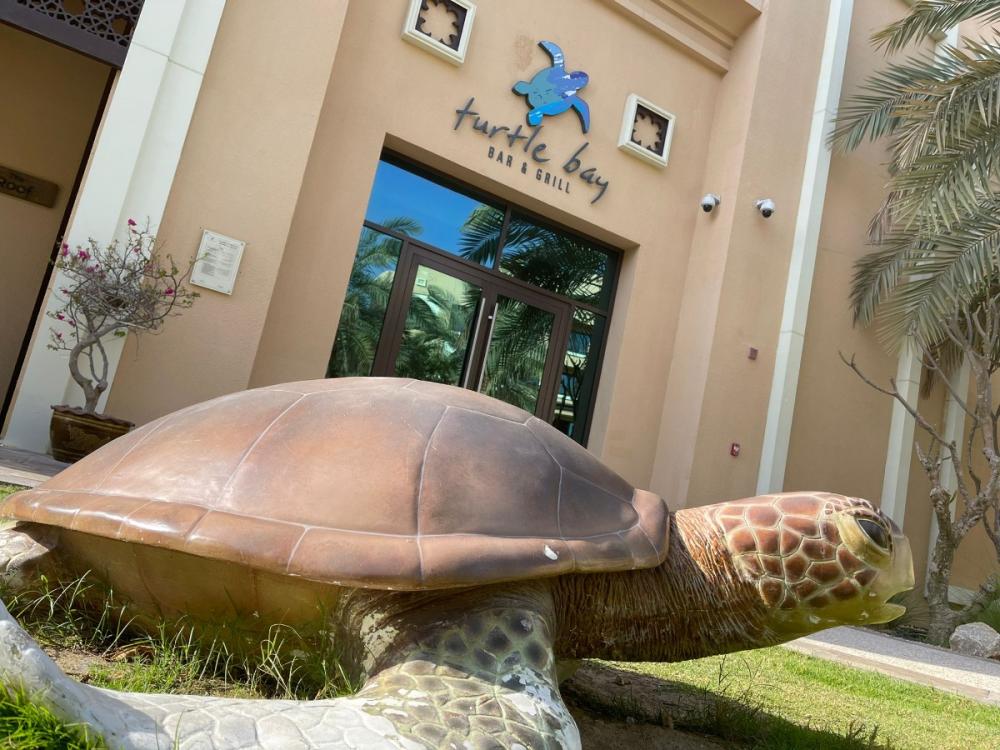 ……and we even found time to take cakes at the lovely Sama Lobby Lounge, part of the main, airport-sized hotel reception which, on the hottest of days, is a cool oasis featuring a unique floor area with ‘sand samples’ from each of the UAE’s seven emirates.
It had been an interesting sojourn in Abu Dhabi.

The hotels were excellent and the emirate itself as stunning as I had recalled from four years earlier. You feel safe, the streets are clean, there is a sense of affluence that only an oil producing state could create, and there’s a small slice of additional luxury that permeates the emirate thanks to the Rotana hotel brand.