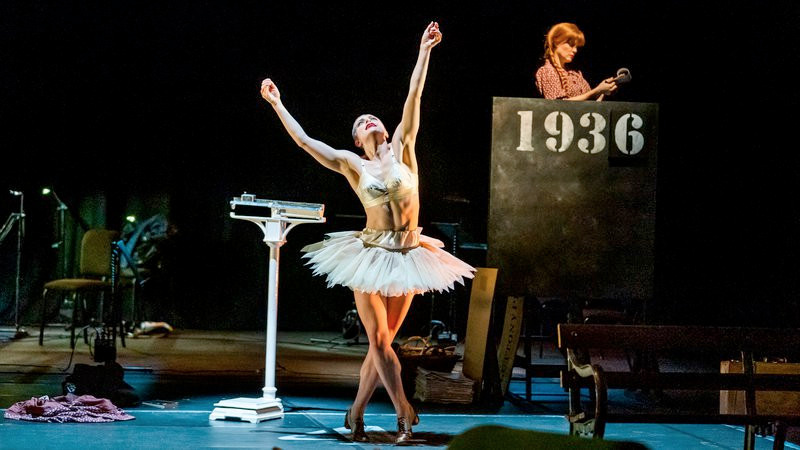 Shelley Eva Haden as Anna II and Wallis Giunta as Anna I in The Seven Deadly Sins. Photo © Tristram Kenton
Of course, it will never take the place of a live performance, but after Saturday’s live streaming, I am left wondering whether it is even second best.

I have to admit, many of the problems were of my own making. I had never done a live streaming to my laptop before and I found the route to the website torturous, yet somehow, at six p.m., there it was on the screen.

I also missed, as I have done so often over recent months, the rituals of an audience gathering or the chance to show my appreciation for a special moment in the show or that poignant moment of satisfaction and loss as the curtain comes down.

None of these factors were in the control of Opera North, but I could not help them colouring my experience.

What was in their control was the failure to adapt to the medium they had chosen to broadcast to. My previous experiences of live streaming had been in cinemas where technical aspects are taken care of by someone who knows what they are doing. The show is then viewed on a big screen.

Most people will have viewed this show on, at best, the screen of their lap tops. They are small and they need plenty of light to illuminate the action. While the lighting may have been atmospheric, it was just insufficient to illuminate what the corps de ballet were doing at the back of the stage.

I checked out this problem with a friend, who had watched on a large screen TV, and he confirmed my impression. It was just too dark.

Brecht saw the potential for the two Anna’s to be different sides of the same personality, although they are frequently referred to in the libretto as ‘sisters’. What added to the mix in the original production was the resemblance between Lotte Lenya, the first Anna 1, and the dancer, Tilly Losch.

There is no similar resemblance between the splendid mezzo Wallis Giunta (Anna 1) and the dancer Shelley Eva Haden (Anna 2). Their artistic connection, however, is intimate. Giunta is a fine actor and quite capable of detonating some alluring moves of her own.

Haden’s dancing is extraordinary. It is not just the agility. The physical strength she shows in enacting the angularities of the score, with its jagged rhythms, can stop the heart. While the lighting is unsatisfactory in other respects, it illuminates her sinuous torso as she assumes some extraordinary shapes.

The purpose of Anna’s progress through seven US cities and her encounters with sin, is to earn money to send back to the family (represented on stage by four couch cabbages, acting as a Greek Chorus), who use the money to build a house. We are not privy to the outcome of this project.

This is a bold and ambitious production. Opera North have shown enterprise in the past bringing us non-mainstream productions and have shown particular devotion to the works of Weill and Brecht. It is a delicate path that they tread between audience pleasers (Fidelio is coming in December) and audience challengers. I like walking back to my car after a show and humming the tunes I have just heard. Little chance of either activity happening in the current climate.