Part of Norber Erratics
Ingleborough, standing at 723m, might not be the highest mountain in Yorkshire but it is certainly the most distinctive, with its large flat millstone grit capped summit. A magnet for walkers, runners and charity fund raisers, the mountain has become a challenge many aspire to conquer. The great news for the socially distanced, geographically challenged or physically unable, is that this can now be done from the comfort of your own arm chair, with pioneering arts charity, Settle Stories using the latest Virtual Reality (VR) technology to make the mountain and its stories and views virtually accessible via a new and free to access Google Expedition. 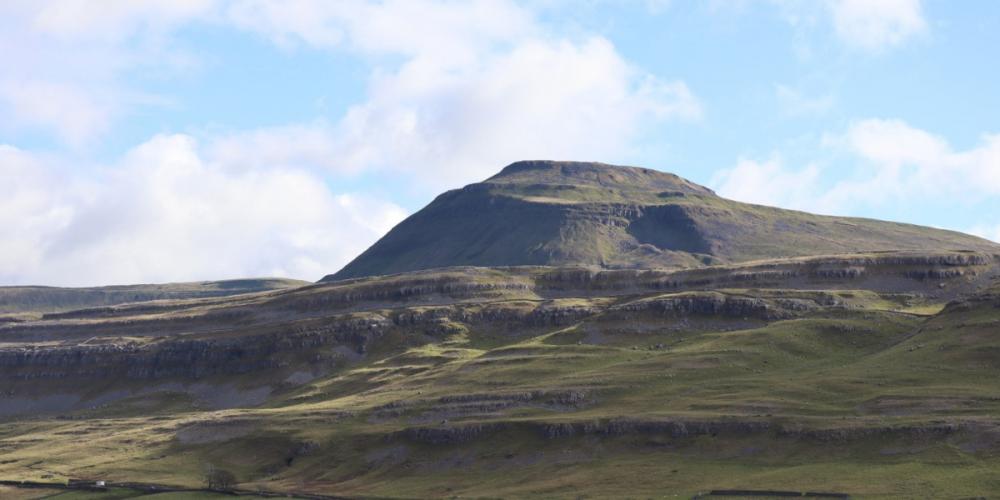 Ingleborough
Selecting your own route, you can ascent the mountain from Southerscales to the north which showcases views of Whernside and some of the mountain’s distinctive limestone pavements, or you can approach from the south west, from Ingleton village via Crina Bottom. This approach reveals Rantry Hole shakehole, one of many such phenomena common to the area formed by swirling meltwater in and between glacial periods, along with White Scar Cave, the longest show cave in England.

Sita Brand, Director of Settle Stories said: “The beauty of a Google Expedition is that the viewer doesn’t need any fancy kit, as the full experience can simply be accessed from a laptop or mobile phone. Jon Buckeridge who received wonderful feedback from this year’s acclaimed Yorkshire Festival of Story supplies the optional narration, further enhancing the richness of the experience, making real not only the wide ranging views of the Ingleborough and Three Peaks’ landscape, but several aspects of its hidden, subterranean world.”


Trow Gill
Combining panoramic cinematography with Google’s VR capability, the Ingleborough Expedition enables viewers to explore eight 360’ scenes in their own time. Additional imagery and infographics can be accessed by clicking on the icons within each scene.

Other highlights of this unique experience which was made possible with funding from Yorkshire Dales Millennium Trust’s Stories in Stone programme includes an exploration of the extraordinary Norber Erratics, a vast array of huge jumbled boulders found on the descent via Thwaites Scar, some of which have been left perched on pedestals of smaller rocks. You can also get a glimpse inside the immense Gaping Gill, one of the UK’s largest known underground cave chambers.

The penultimate scene is dedicated to the mountain’s barren and expansive summit, which filmed on a rare wind and mist free day presents its spectacular vistas from every cardinal direction, inclusive of clear view over towards Lancaster and the sea.

Don Gamble, Stories in Stone Programme Manager, added: “This is the third VR tour that Settle Stories have collaborated on, the earlier ones exploring the Ribblehead Viaduct for its 150th anniversary and the Victoria Cave. Both of these expeditions have achieved vast audiences this year, not only sharing Yorkshire’s great wealth of geological and cultural heritage, but enabling people everywhere to access its beautiful landscapes from the safety of their own homes.”

Settle Stories are an independent arts charity in one of the most rurally isolated parts of the UK. Presenting stories through events, Settle Stories creates and curates the Yorkshire Festival of Story, the largest free online storytelling festival globally. Stories in Stone is a scheme of conservation and community projects concentrated on the Ingleborough area. The scheme was developed by the Ingleborough Dales Landscape Partnership, led by Yorkshire Dales Millennium Trust (YDMT), and supported by the National Lottery Heritage Fund.