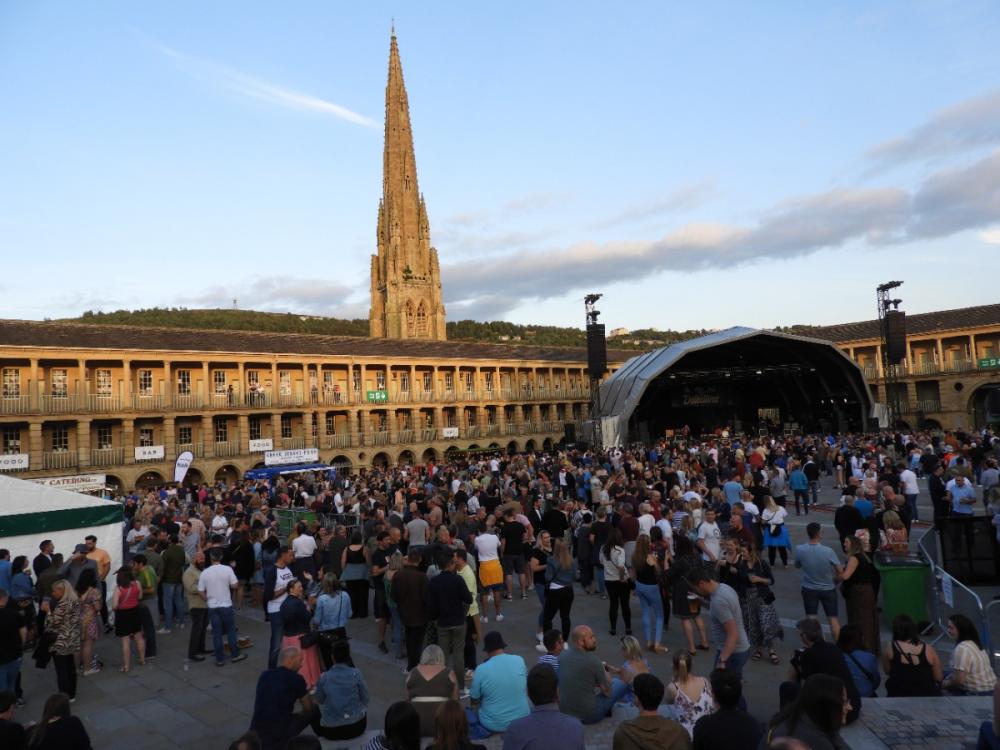 There cannot be a more spectacular architectural outdoor venue in Yorkshire to hold a concert than the Piece Hall in Halifax. This historical venue has over recent years, started to hold a series of big act concerts with the Kaiser Chiefs, Manic Street Preachers and New Order still to come this year. 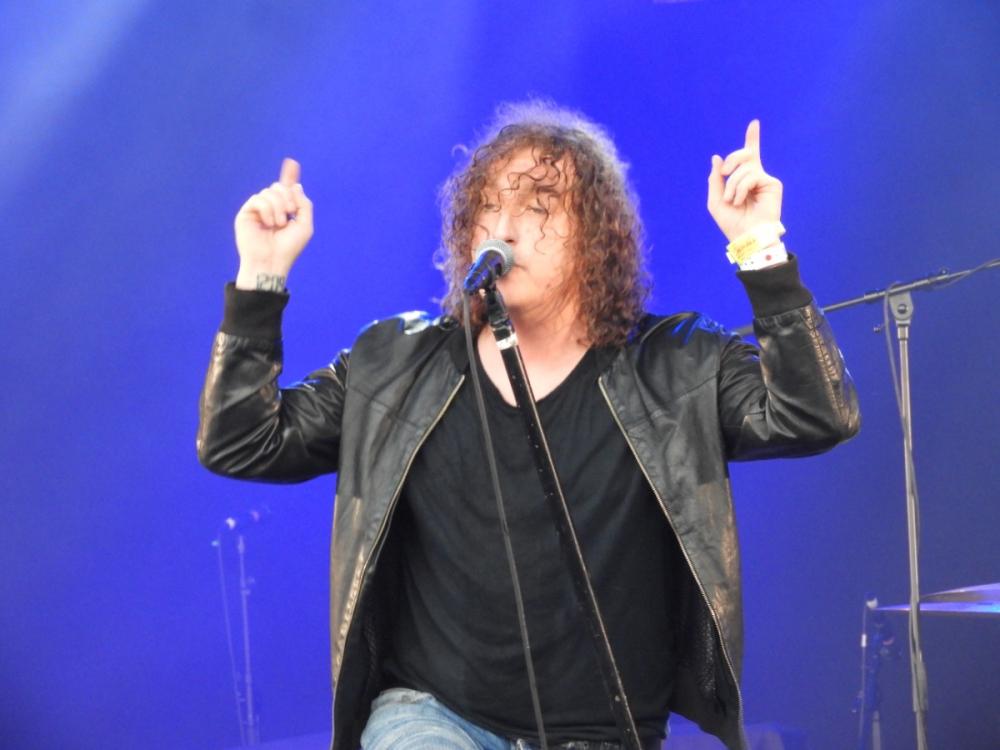 Matt Bowman
Leeds’ band The Pigeon Detectives have in lead singer Matt Bowman one of the best frontmen around: he weaves around the stage like a man possessed, throwing his microphone lead up into the air like a circus juggler. He reminds me of a younger Roger Daltrey from The Who as he swirls and twists as he gives his all.

You can forgive his contagious enthusiasm when he and the rest of the band have been unable to play live in front of an audience for near on eighteen months. They have the audience welcomed like long lost friends as they reel off the hits with ease such as This Is An Emergency and Take Her Back.

“I know a lot of you have not come to see us as we are the warm up band for the main act” Bowman offers making it sound like an apology. No apology needed as he and the band were worthy of bring headliners themselves. 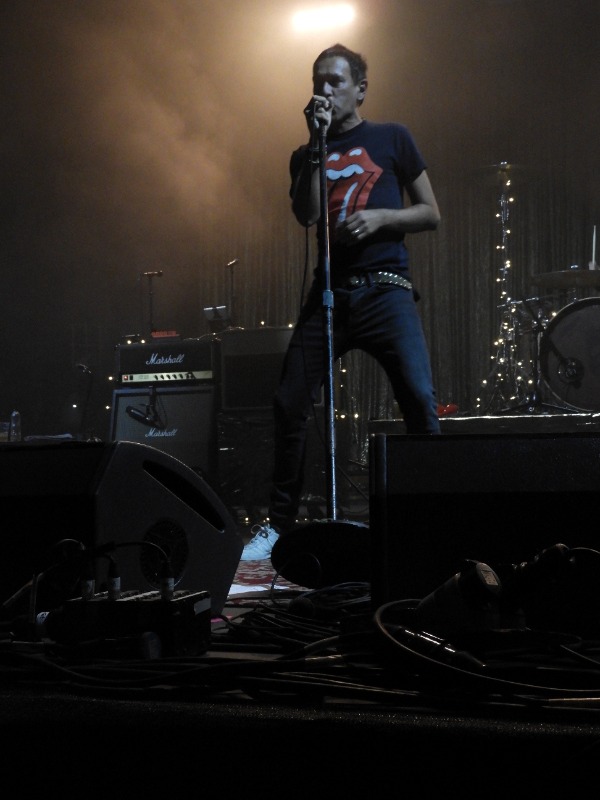 Shed Seven's Rick Witter
York band Shed Seven were hugely successful in the Britpop era of the mid nineties. The fans had to wait sixteen years for the release of their last album Instant Pleasures in 2017. The band have a strong back catalogue of songs that really they do not need to record another album - they could go on touring and performing these Britpop classics and the fans would still come to see them.

Such is their dedication that one fan has the lyric from On Standby tattooed on his back whilst another fan has walked down the aisle at his wedding to one of their songs, antidotes that are shared during the gig.

Room In My House, a track from their last album opens up a memorable of hits. Wearing a Rolling Stones T Shirt, Witter has indeed the swagger of Mick Jagger. 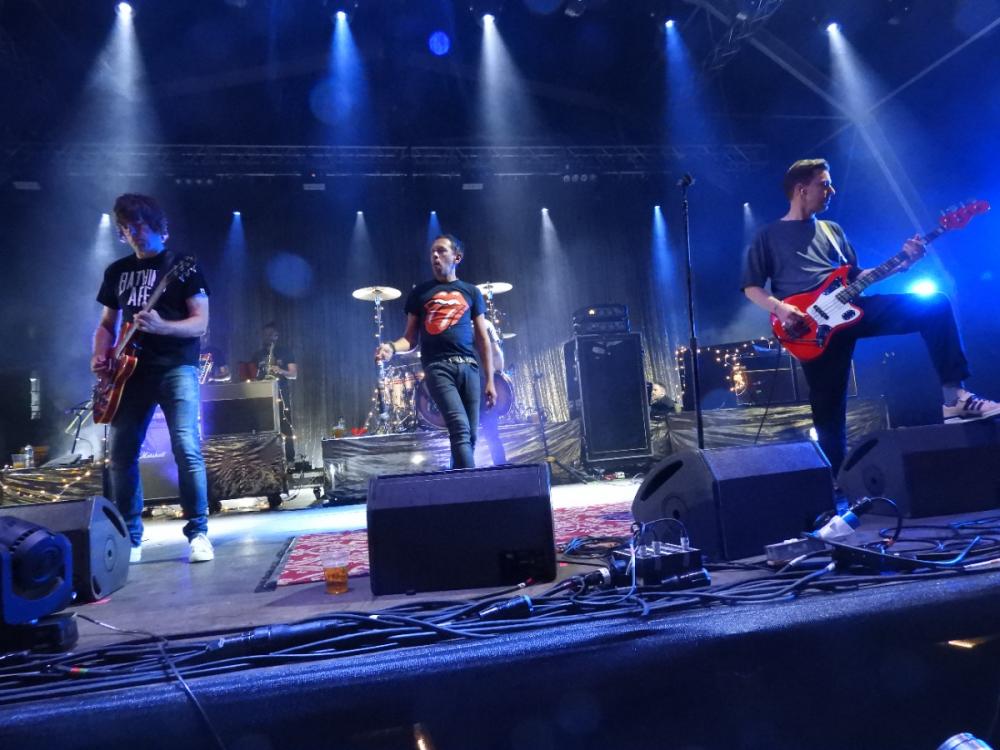 Shed Seven
A three piece brass section fleshes out Getting Better and She Left Me On Friday - who else but Shed Seven come up with a lyric such as “She left me on Friday and ruined my weekend”. It might sound a tad laddish but in the mid nineties it all made sense and still does now to the faithful.

It is not though, a night of full on pop/rock songs as softer more mellow tracks such as High Hopes demonstrates, though of course there was only ever one song that they could finish their ninety minute set with - Going For Gold.

Naturally the band returned with the track most people associate with the York outfit: Chasing Rainbows. As the audience took over the chorus, the rainbow’s end definitely ended in Halifax as fans and band alike found their pot of gold.
Also by Graham Clark...
Paloma Faith – Keeping The Faith In ManchesterInterviewing The VengaboysLet’s Rock Leeds! - The 80’s Music Festival Charms At Temple NewsamDuran Duran - No Ordinary World In ScarboroughAlbum Review: Metallica - The Black Album Remastered