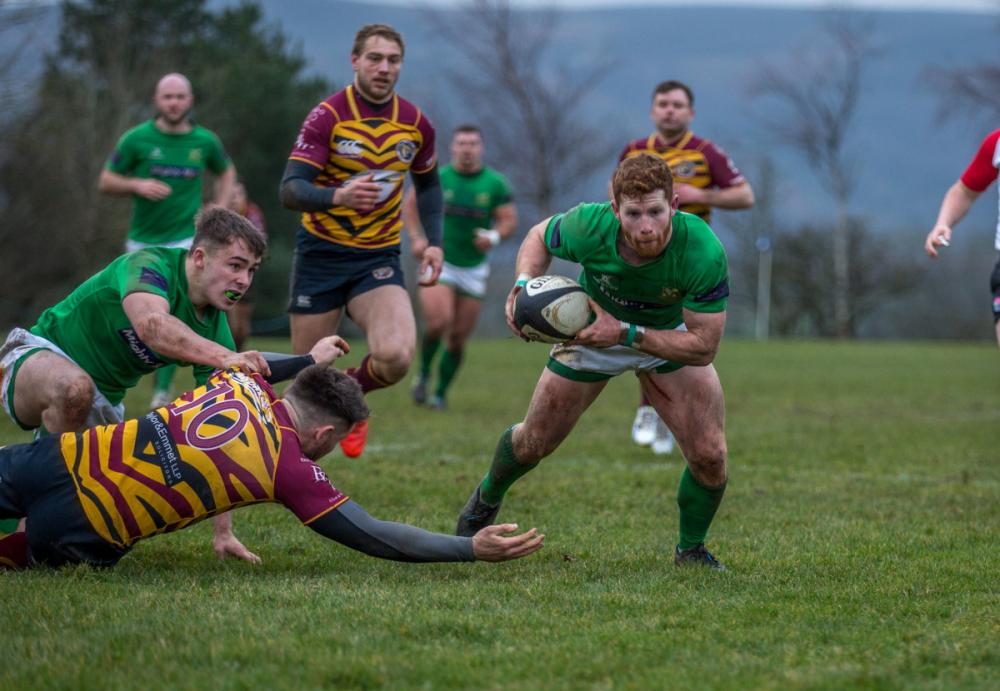 photo by Ro Burridge
Dale were greeted by a chilly wind when they arrived at Dore Moor but they left the ground with the warm satisfied glow of four points and a well-deserved victory.

Dale dominated play throughout and Tigers rarely got a chance to get into their stride.

Sheffield opened the scoring with a long-range penalty from Mark Ireland. Dale hit back almost immediately from the restart. Sheffield’s exit kick was charged down and then the ball only cleared for a Dale line out outside the home 22. Quick line out ball was spread right and Oscar Canny saw a small gap in the defence. He had the speed and strength to exploit this and burst through to the line to take the lead. Jack Blakeney-Edwards added the two points.

Wharfedale heaped pressure on the Sheffield defence. Will Lawn and Oli Cicognini produced runs that had Tiger’s defence scrambling backwards. One break by Cicognini was only foiled when his attempted offload to Joe Altham didn’t quite come off.

Dale went through over 50 phases with Sheffield hardly touching the ball until after 30 minutes Sam Gaudie scrambled over. Blakeney-Edward`s 100% record over the last few weeks sadly came to an end when he misjudged the wind and the ball was carried past the upright on the wrong side.

Dale’s lead was cut in the last few minutes of the first half when a succession of penalties saw Tigers get into Dale territory. George Hedgley was adjudged to have pulled down a driving maul close to the line. From the ensuing line-out an efficient catch and drive got the try for hooker Louis Townsend. 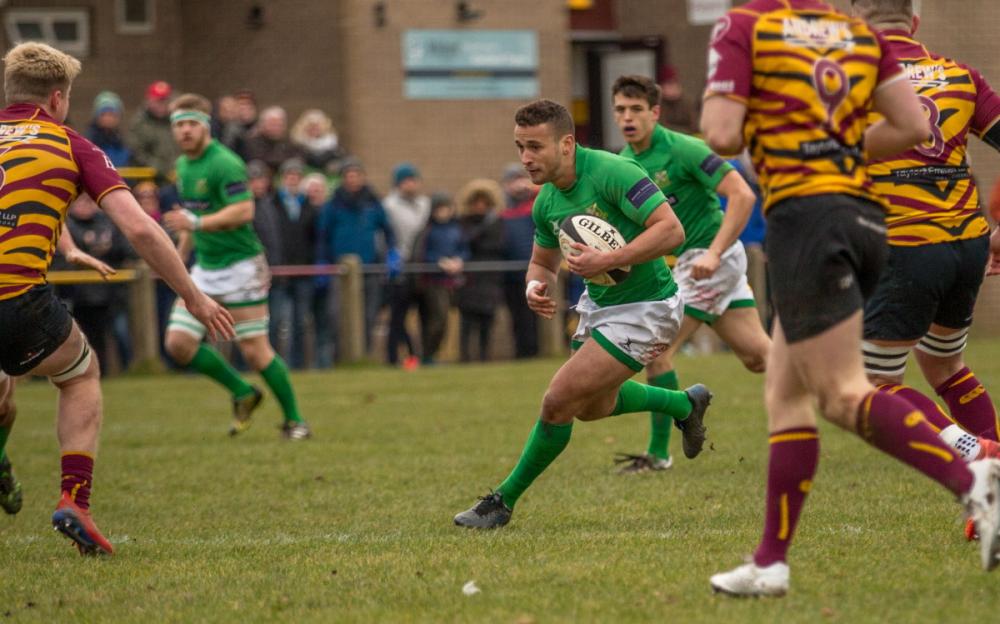 photo by Ro Burridge
An excellent touchline conversion meant that Dale went in at half time with a slender 2-point lead. This was hardly a fair reflection of possession and territory and maybe Dale should have had more points on the board. The travelling faithful were, as ever, optimistic as they had played the first half into the strong breeze.

Dale made good use of the breeze at the start of the second half and exited up to half way. Tigers’ couldn’t get the ball straight and a scrum followed. The ensuing scrum penalty was won but a rare mistake gave Tigers a chance to clear. Six phases later turn over ball was quickly run by Dale and a searing break by Canny forced a penalty and a yellow card was produced for Sheffield’s James Newman.

A successful line out saw Dale probing away at the try line and eventually a simple three points were on offer. Blakeney-Edwards made no mistake.

Apart from one set piece Wharfedale dominated the scrum winning a high percentage of penalties. It was no surprise then, after Sheffield had knocked on, that a scrum penalty was awarded to Dale on half way. Another fine touch kick by Blakeney-Edwards gave Dale a line-out Tigers’ 22.

The usual toing and froing at the line-out left Josh Burridge on his own. He caught the ball and fed Gaudie. Gaudie ran past a confused defence, shrugging off tackles and weaving his way to the line. Blakeney-Edwards was back to his accurate best with the conversion. 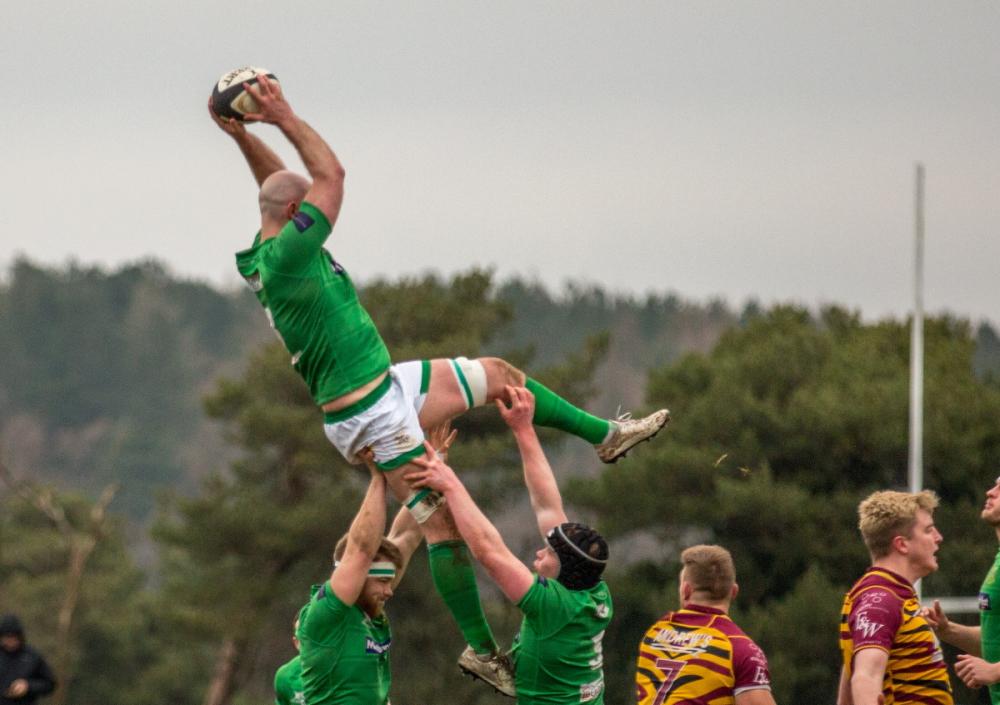 photo by Ro Burridge
The restart was again taken by Dale and a surging run from Joe Altham led to a penalty and Dale back in the home 22. Then a different Sheffield put in an appearance. They turned the ball over, set up a kick-chase and regathered the ball and got up to midfield. 10 strong phases followed before the ball was swung left.

The most exciting try was then scored by the Tigers’ backs who for once managed to put together some flowing rugby with good handling and support play. Peter Swatkins got the try and Ireland was successful from the tee.

Dale again took control of proceedings and 30 strong pieces of possession, including a fifty-metre touch kick from Blakeney-Edwards, saw them back deep in the home 22. Blakeney-Edwards secured the victory by making the lead two scores with another penalty to send the faithful back up the M1 with smiles on their faces.

Dale strove to get the bonus point fourth try but valiant efforts came up short. Sheffield were also desperate to get another score for a losing bonus point. The last kick of the game was from Ireland whose inaccurate long range shot at goal closed proceedings.

Sam Gaudie put in another buzzing and biting performance that earned him another Star Man award. As usual there were many players who could have won.

Cicognini was a constant threat and Oscar Canny ripped the defence apart on more than one occasion. Blakeney-Edwards controlled the game and he dictated where play should take place and at what pace.

The pack were magnificent (apart from the one scrum) keeping the Sheffield 8 on the back foot all afternoon and providing good ball from the line-out. Josh Burridge was outstanding on his return and ably supported by the rest of the engine room. Joe Altham put in another stupendous shift both in the tight and around the park.