Song Of The Ungirt Runners: The Result Is What You See Today 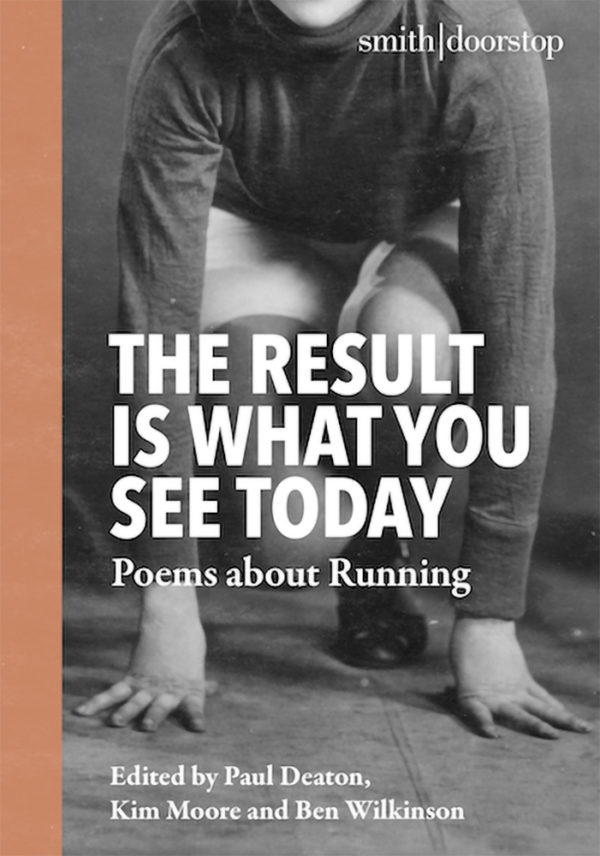 The monumental growth of the Park Run phenomenon in recent years is one yardstick of running’s burgeoning popularity. It is fitting, as one of the curators of this fine anthology of poems implies, to measure that phenomenon in the words of its practitioners, in a medium of expression which best captures the immediacy, the pain, the gratification and the freedom associated with this most psychologically liberating of pastimes.

Park Run has levelled the playing field and opened a theatre of infinite ambition and possibility to a new demographic. Emergent from all walks of life, its participants may share no common ground beyond the desire to run. And it is well that the editors of The Result is What You See Today have cast their net wide in order to reflect that diversity, for in amongst established writers, and early Olympian observers, we find pearls of acutely insightful poetry from poets old to running, but new to the refracting of that experience in verse.

As a lifelong runner, it would be hard for me not to be persuaded by the range of reflections covered here, not least because these poems hold up a mirror to the runner’s fears, rewards and above all, the exegesis of wellbeing that rises like a hot flush at the end of a decent run in any weather. Or the physical symptom of distance running known as the ‘Runner’s High’ which yields the illusion of limitless stamina in the rhythmical pounding of footpaths or pavements.

Liberating, too, to see a welter of women runner/poets asserting parity in a domain previously dominated rather by an hegemony of male attitude than any surfeit of natural ability. Elisabeth Sennitt Clough’s fine poem ‘Parkrun’ encapsulates the arrogant piggery of those men who see women runners as de facto obstacles to be snarled at on route:

‘How dare I get in the way of a fast man’, she asks disingenuously, in the certainty of male superiority delusion rendered spectacularly uncharitable in the season of goodwill. The insults fly like expectorant...i’ve heard them many times at races. It is instructive, in this regard, to consider the year-on-year narrowing of the gap between male and female times, especially at long distance. An ironic corrective to instinctive sexism may soon be at hand. 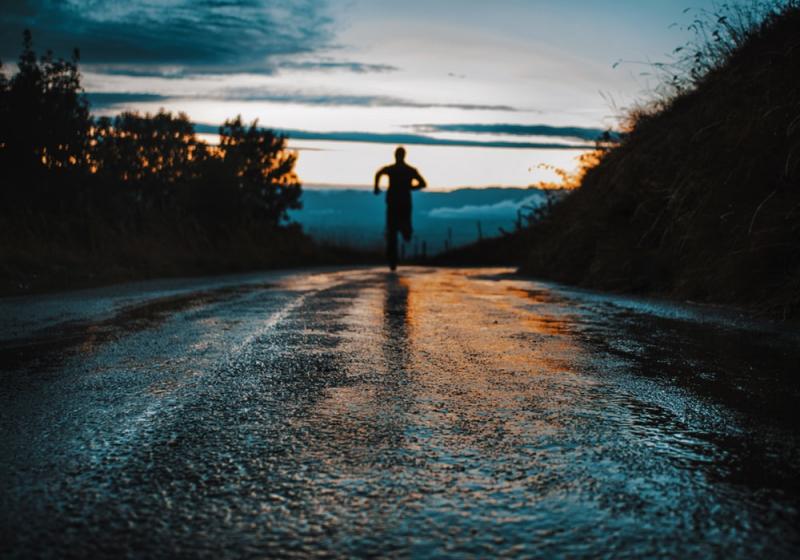 The problems of fear and safety – the vulnerability of women, particularly on night runs, has increased in accordance with higher rates of participation – is only now being taken seriously in new studies. Historian and practitioner, Rachel Hewitt, is breaking new ground with current research into the element of fear in running; her recent study, ‘For Women, Running is Still an Act of Defiance’* infers a wider institution of male control which is perfectly reflected in the all-consuming general anxiety of Kerry Darbishire’s ‘Flight’, and has never been seriously addressed. That Anne Ryland, in her crushingly ironic poem of escape, ‘Sunday, on the run’, is able to describe a wider condition, almost, of servitude by identifying ‘a yellow sign (that) casts me as a woman proceeding / at her own risk’, circumscribes a kind of historical silence.

But the sheer bloody verve of getting over instinctive barriers to running is never better asserted than in the immediacy of this pastime that costs next to nowt, save for motivation and effort expended. And several poems here are devoted to the finding of unexpected happiness through this, for some, unprepossessing medium. Wendy Pratt’s poem of defiance, ‘Fuck You’, reverses the arrogance of Sennitt Clough’s runner with a lacerating series of self-perceptions, before chastening preconception with an unequivocal ‘I don’t give a fuck’. Morag Smith, by contrast, finds community in the comradeship of a disparate group of women foregathering weekly in the ‘The Tuesday night joggers’. A hymn to collective purpose, Smith gives ‘Yasmin, / washed up six months ago on a beach’, ‘Brenda giving up the ciggies again’, and ‘Pam just off the chemo’ the means to break free in their hard won and ‘sweaty’ invincibility.

Not that all of the poems engage with running in the literal or competitive senses. In a later section of the book, running may be a metaphor for flight, for the ‘push factors’ of unplanned migration of the sort precipitated by atrocities or abject poverty, or both. Marie Papier’s moving rendition of displacement fragments in acknowledgement of the terrible cause; her litany of visceral pain finds salvation only when running over bridges and along the railway lines of her adopted home brings with it the ironic suggestion of a return – ‘I run / as if back to Oromia’. (‘Run, Boorana, Run...’).

Or it may, as in Geoffrey Hill’s ‘Watching the Boston Marathon’, light the streets with the lambent nobility of the Ancient Greek original, where sweat-garlanded Kenyans resemble messengers of glory, almost in an act of self-parody. There is something of Norman Mailer’s titanic sense of combat here; an oblation before a ritualised, shared moment. 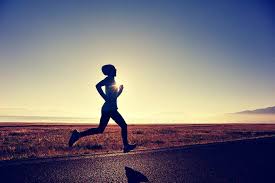 But more often, in this unique anthology, we are grounded in a universe of pain and reward, of oblique compulsions made concrete, and of the incalculable benefits to individual wellbeing and directed collective purpose. Lewis Buxton’s inventory of emotional and physical turmoil in the profoundly clotted, and brilliant, prose poem ‘Fragility’ is delivered in a stream of consciousness, of disparate anxieties measured in terms of the quotidian which might overwhelm the unfocussed mind on a long run. The maelstrom of untidy, yet strangely consonant, thought is a microcosm of all that running – the compulsions, the pain, the elation, the democracy of participation – promises, and mostly fulfils:


king or captain, actor or chaplain, a eulogy of men shouting, who
all have sheds in their hearts & grief in utility rooms, hide shame in old bank
statements, fall apart, pulled tendons, stalled engines, no service stations
for the heart. Go for a run. Man up. Stand down. Stand up. Man down.

Inward contemplation, in this exhaustive anthology, is counterpointed by outward observation: one of the many benefits of long-distance running is the conferring of clarity. A heightened, adrenalin-sharpened, sense of awareness may yield new perspectives on commonplace scenes, bringing, at least to the receptive sensibility, a natural poetics of opportunity. Drawn into the runner’s own sightline, the reader’s received impression is of steroidal landscapes alive with potential, susceptible to metaphorical suggestion, unconstrained. Some of the most acute and perceptive poems, here, are built around objects which mostly go unnoticed in the disinterest of en passant, but when refracted through the glass of poetry, become illuminated, or lit from the inside. Helen Mort’s psycho-geographical ‘Coffin Path’ suspends the runner in a world of unsteady Cumbrian walkways, of ‘stones worn treacherous’ where the past of the shouldered dead remains palpable, and the landscape itself doffs a figurative respectful hat to those who have lived and those who follow. Which is the precise converse of Duncan Chambers’ ‘Thornes Park, Wakefield’ whose direct address of telling detail is the key to recognition, by cognoscenti and non-participant alike:


We need more words for mud:
the black quagmire that sucks off your shoes,
the brown slick whipping your feet
from under you; the plaster
that congeals on your calves,
comes off in lumps and blocks the shower.

Also by Steve Whitaker...
There Could Be Temples: Still By Christopher MeredithPoem Of The Week: 'One Cigarette' By Edwin Morgan (1920-2010)Coming Home: Connections - A New Collection Of Short StoriesGoing Astray: On A Distant Ridgeline By Sam ReesePoem Of The Week: 'The Couple Upstairs' By Hugo Williams
Literalism ‘congeals’ to give meaning, here. The coagulation of mud and rain and dripping cold expresses something otherwise unspoken about winter running, winter racing, where salvation is vouchsafed only when the ‘clammy’ vest is removed and the glow of ‘afterwards’ infuses the bones like a kid on ‘Ready-Brek’. The sharpness of the contrast is the point.

As, in another way, is the stark difference between perceived reality and expectation. The kaleidoscopic excellence of John Goodby’s take on the comic-book figure of Alf Tupper resides in his expert examination of the social mores of fifties Britain through the lens of an entirely fictional, in many ways preposterous, working class hero. Conceived in the form of a triptych of Tupper’s origins and trajectory, Goodby’s formal precision gives vicarious meaning to a pinched, xenophobic post war Britain where the search for ‘ordinary’ heroism against all the odds – a diet almost exclusively of fish and chips, fags and cheeky optimism – comes from behind and wins the day by beating allcomers, toffs, and foreigners, if only in the pages of the Victor. Goodby’s brilliant condensing of images nails a moment in history, and an attitude, in four lines:


Truculent uncomplaining underdog, a have-a-go hero,
he hoes the row of reconciliation to the world, and to
inequity; unless gall and class unhinge at underdoggedness
at guileless blithe outrage. As they never do, however. (‘The Tough of the Track: an Alf Tupper triptych’)

Running was never meant to be circumscribed by the limits of its own nomenclature. At best, and as the editors of this wonderful collection illustrate in a perceptive series of introductions, it may be nothing less than transformative. The new language of mud-spattered jargon that poet Justina Hart is acquiring in her short epiphany represents a life-changing continuum:


It’s a language of one foot
in front of the other.
I won’t stop until I’ve travelled
from one life to another. (‘Running’)

The Result is What You See Today, edited by Paul Deaton, Kim Moore and Ben Wilkinson, is published by smith ǀ doorstop