Spain On Coronavirus Lockdown. Insights From Our Correspondent

Following 193 deaths and over 6000 coronavirus infections, Spain - the second worst-hit country in Europe after Italy - is in lockdown for an initial 15 days.

In a televised announcement to the public, Prime Minister Pedro Sanchez has said the population of over 47 million people must not leave their homes unless absolutely necessary. Our correspondent, Sharon Cain, is among those confined indoors during the crisis.


Clouds of uncertainty hang over residential areas. Images by Steve Hare
An eerie silence hangs over our residential area in a small town near Torrevieja in the district of Alicante - as realisation of the lockdown sinks in.

Having enjoyed the area’s magnificent coastline in a small apartment over the past 17 years, little did we think our vacation would transpire into an enforced stay as the battle to contain the deadly virus ramps up.

The dramatic turn of events globally - and within Europe - less than two weeks since we returned to our flat from a motor home adventure in the magnificent region of Andalucia - has been unparalleled.

A usually popular but now deserted local beach where we went running only on Friday morning was a precursor of what was to follow over the next 48 hours. 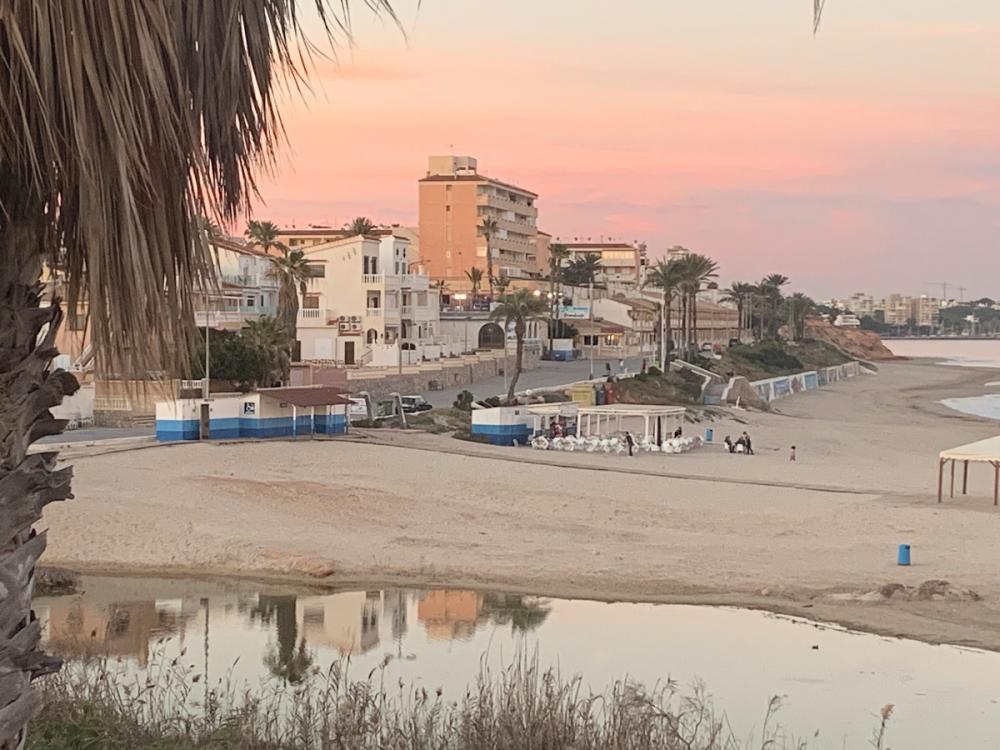 Deserted Beaches on the Costas are closed to help stem the contagion
Since then a shut down has taken its grip on schools, universities, bars, restaurants, beaches and shops selling anything but food and other basic staples. Public transport and rail travel have been reduced with the closures impacting on leisure and sports activities such as cinemas, theatres, swimming pools and sports fields and centres.

Concerned shoppers are wearing masks and some provisions are difficult to source as panic buying takes hold.

The order to stay put - except to go to work, the bank, buy food, petrol, medicine and travel to clinics or to care for elderly, young, and dependents, are consistently repeated and reinforced by officials and local media as the contagion continues unabated.

No one is safe - Begoña Gómez, wife of Spain’s Prime Minister Pedro Sanchez, has tested positive along with two of his cabinet ministers.

While stocking up for provisions, a store employee said concerns had further escalated due to an influx of people from Madrid - the ‘epicentre’ of the virus with almost 3,000 cases - to their second homes on the coast.

The Spanish media has also castigated the mass exodus from Madrid on Friday afternoon as people ignored advice to stay at home and arrived on the Costas before restrictions came into force.

A week ago Madrid hosted International Women's Day parade to which thousands of women from across Spain flocked - irrespective of worries of mass gatherings helping to spread the contagion.

Tourists and students have understandably been scrambling to leave Spain amid the chaos and constantly changing travel situation.

It is understood, but not officially confirmed, that Spain’s borders will remain open - enabling Britons to return via their own transport and ferry crossings - which are also being reduced.

With an estimated 300,000 plus English people living in Spain, concerns over their future following Brexit have been overshadowed by fears including access to health care as coronavirus continues to increase.

With all police forces, including those run by local authorities, under the control of Interior Minister Fernando Grande-Marlaska - and armed forces on stand-by as the lock down takes hold - we all head into the unknown.

Although dominating everyone’s waking hour, any certainty as to when it will all be over remains pure speculation as unprecedented measures in exceptional circumstances begin in earnest.


Also by Sharon Cain...
Homeward Bound - A 96 Hour Journey To The UKWeek 3 Of The Spanish Lockdown: Tips As Cases Surge To All Time HighSpain Closes Ports And Airports And Extends LockdownUK Holidaymakers Urged To Return Home As Hotels Close In Coronavirus PandemicLa Manga Club: Sporting And Leisure Excellence With Sunshine Twist