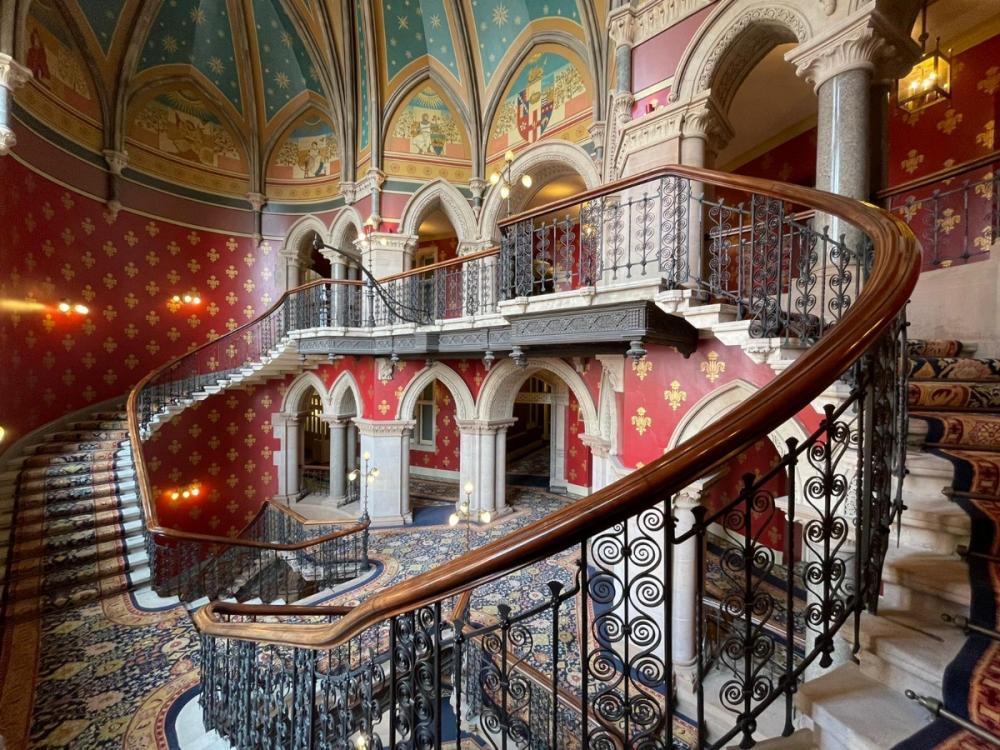 There are things in life to be appreciated and others to be enthused about…..I just never thought that a staircase would be one of them!

Then again, unless you have been to London’s St Pancras Renaissance Hotel, you probably think I have taken leave of my senses. 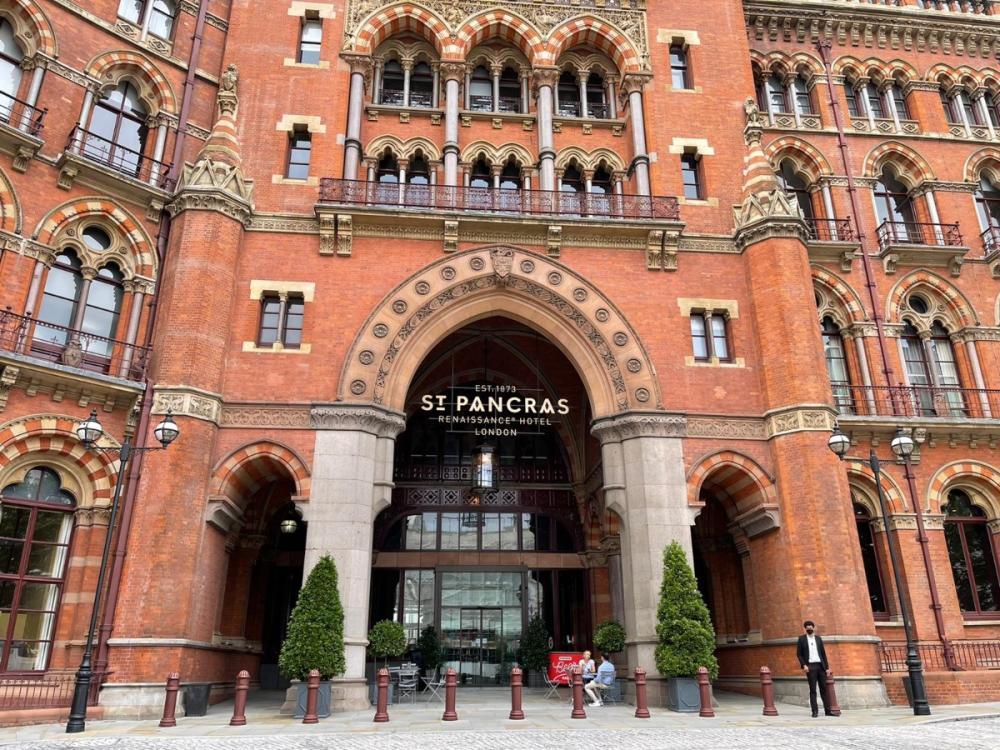 This stunning edifice stands to the front of St Pancras railway station, just yards from the Paris bound Eurostar platform. However, as former home to the 1873 Midland Grand Hotel, designed by George Gilbert Scott, the property is also a statement of Empire and from a period in history when the ‘Empress of India’, aka Queen Victoria, reigned supreme.

Now in its 10th year as a Marriott International property, the hotel, situated in the heart of King’s Cross, is celebrating by introducing a selection of spa, stay and dining experiences including its 10 till 10 package when guests are invited to ‘Stay, Play & Enjoy Being Away’

As well as a slice of five-star sophistication they can also bathe in pop and movie history which comes as a no-extra charge bonus for the starry-eyed. 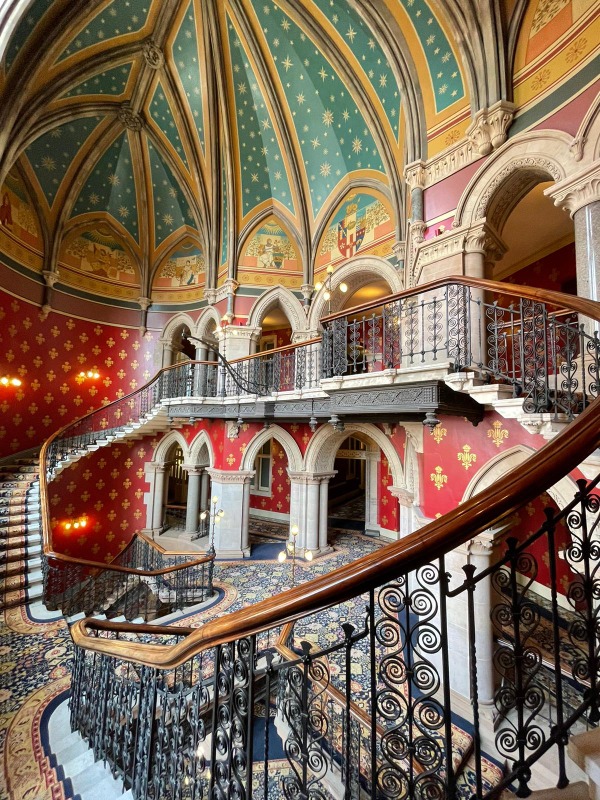 The video for the 1996 Spice Girls song Wannabe was filmed at the original Midland Grand Hotel – on its magnificent staircase after Barcelona failed to grant the necessary filming permissions to shoot the now iconic video. And, in Christopher Nolan's 2005 film Batman Begins, the Arkham Asylum stairwell was also filmed there …….so it is a hotel not without its own glamorous pedigree. 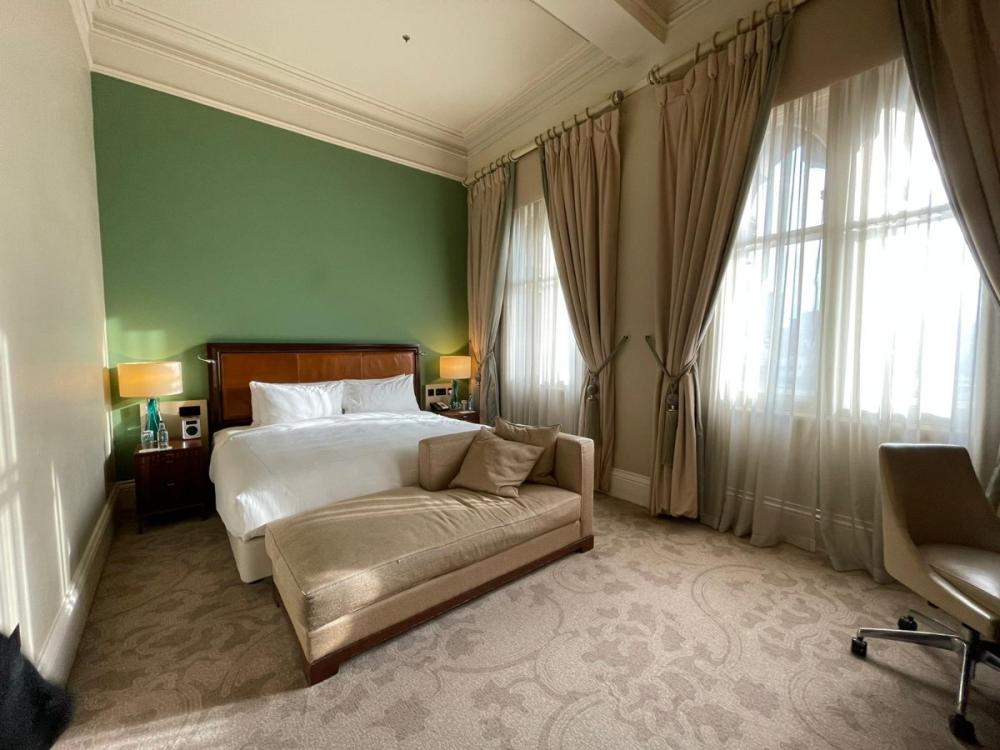 The hotel’s 10 till 10 stay package provides for an early check in at 10am and late check out at 10pm the following day, enabling guests to make the most of an indulgent staycation in the city without the need to book two nights.

The promotion starts with a champagne brunch in The Hansom... 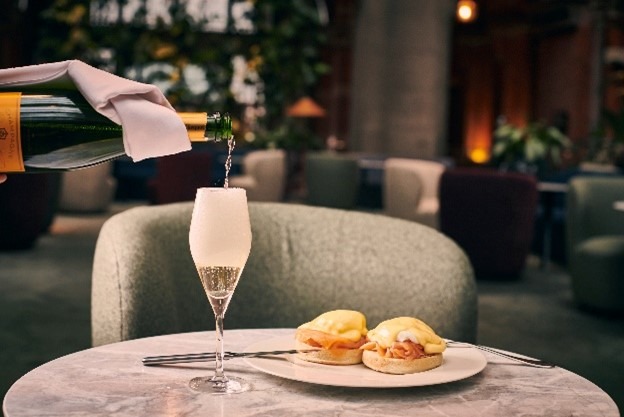 ... followed by a post lockdown re-charge in the serene, Victorian-inspired St. Pancras Spa, a luxury oasis steeped in old world charm and hidden in the bowels of the hotel, where a steam room and swimming pool invite visitors to relax in the Turkish-style surrounds. 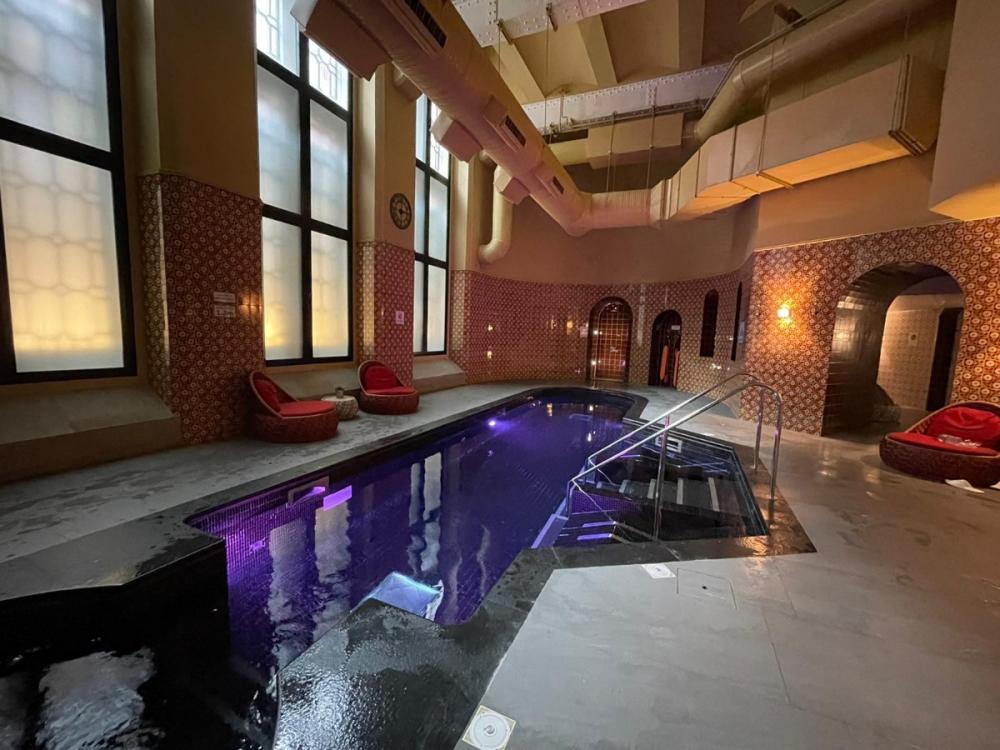 Next morning guests have the option to lie in at leisure knowing check out isn’t until 10pm later that evening, or enjoy an early breakfast before heading out for the day knowing that their luggage is safe with no pressure to depart any time soon. 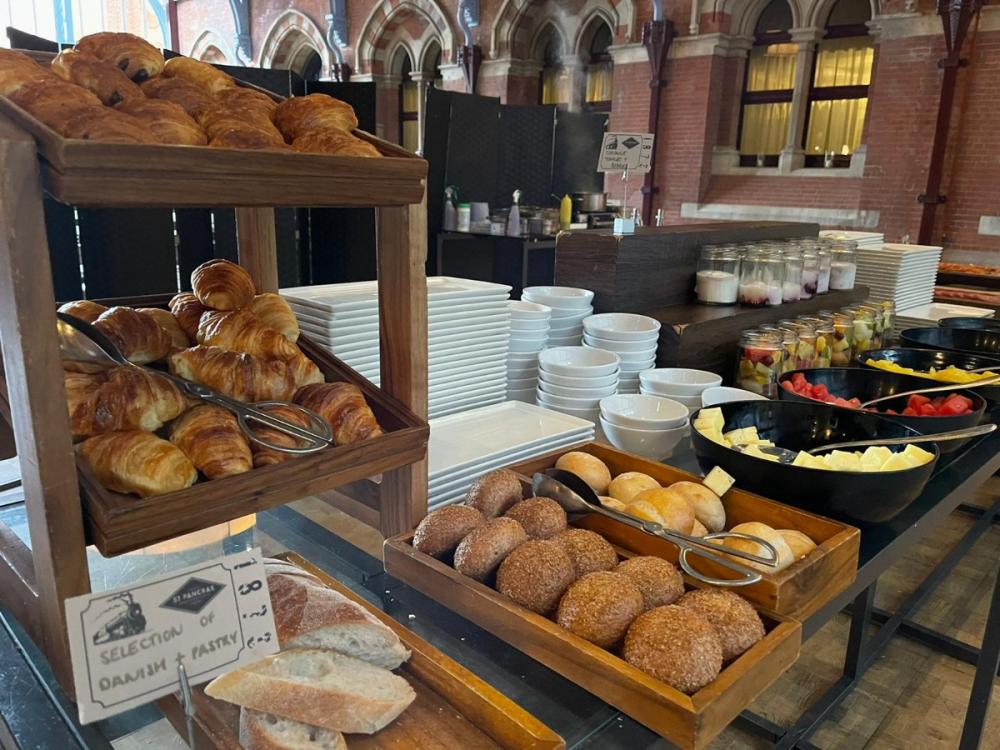 In reality few people probably stay until 10pm, however, it is nice to know that you have that option if, for example, you have decided to take in an afternoon show followed by an early evening dinner.

Alternatively, there’s lots happening nearby. The hotel is a short walk from Regent’s Park and Camden Town, and the buzzing Granary Square, Royal Opera House, The British Museum, Covent Garden and countless other city attractions, are all just minutes away. Between 1935 and the 1980s the building was used as railway offices and then, in 2005, the upper levels of the original structure were redeveloped as apartments: the now iconic clock tower stands at 76 m (249 ft) tall, with more than half its height usable space. These days, however, the spectacular ‘central hall’ of the hotel – branded as The Hansom – doubles as a place for dining... 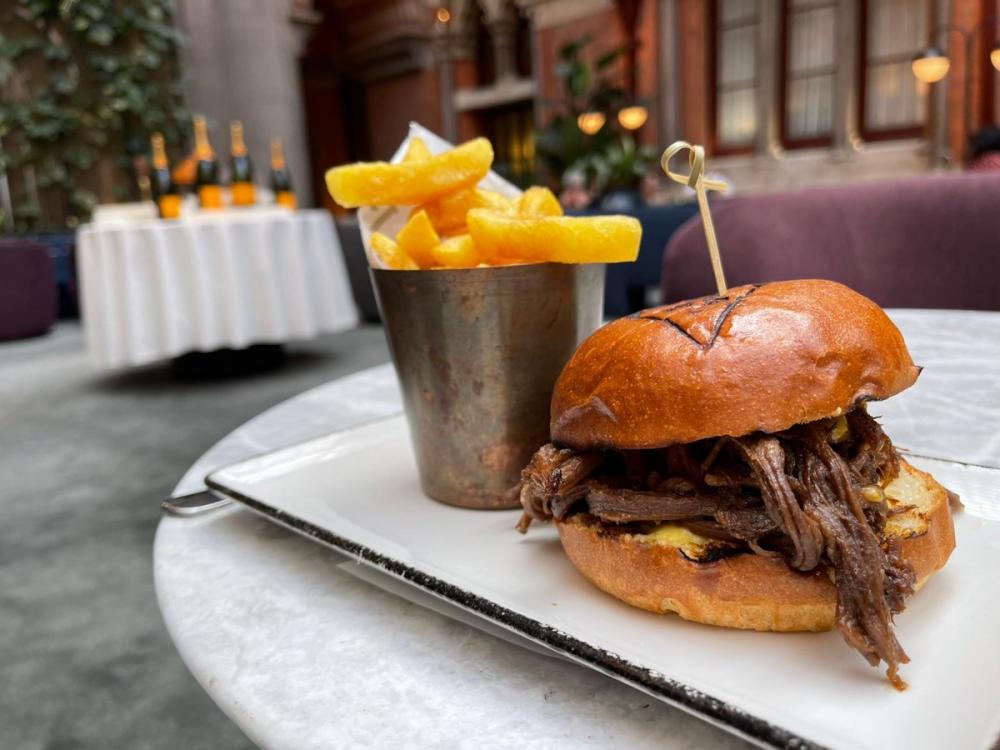 cocktails, breakfast and evening entertainment....look out for the tell tale signs above your head: the words ‘Booking Hall’ can still be spotted in the stonework. It is a beautiful centrepiece to the hotel,

There you will also find the special 10 piece cocktail menu... 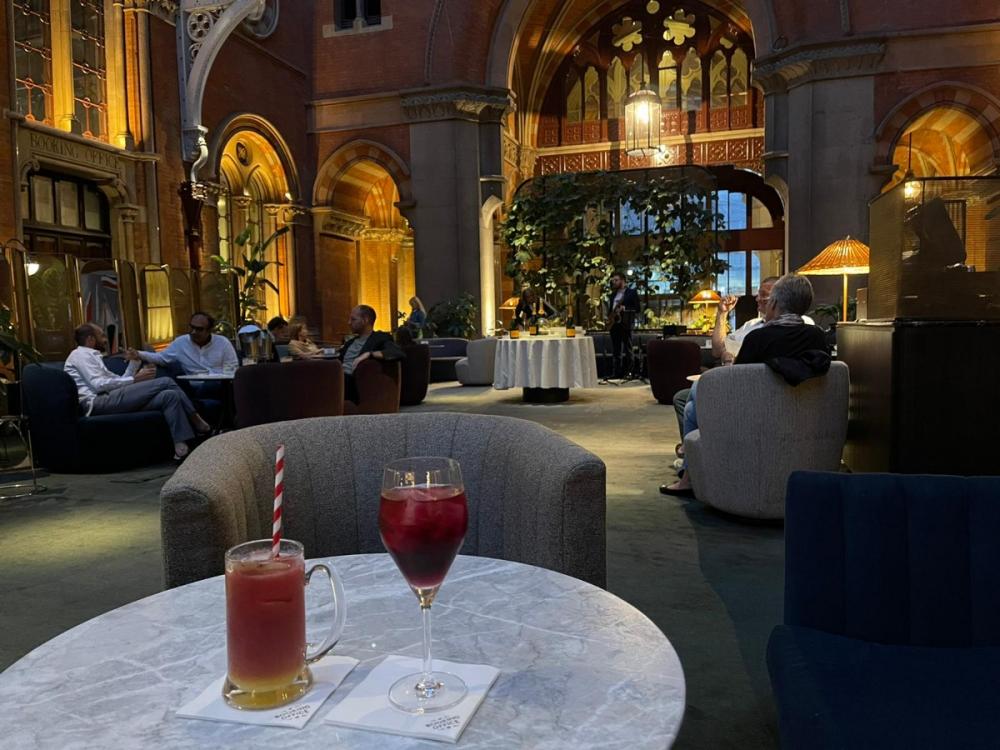 ... which is divided into two, the first section pays homage to the hotel’s iconic heritage, introducing signature cocktails including:

Zig-A-Zig-Ah: Created in honour of the hotel’s signature staircase and backdrop to the Spice Girls’ Wannabe music video, which celebrated its 25th anniversary of release earlier this year.
Potio Fumum Magica: A spellbinding homage to the much-loved mythical series and hotel’s connection to King’s Cross platform 9 ¾ - the gateway to the wonderful world of wizardry.

While international travel is still somewhat sporadic, the second section of the menu allows guests to experience a taste of a destination without stepping foot on a plane or train, through a selection of travel-inspired cocktails.

Each cocktail draws inspiration from a unique destination which features another Renaissance Hotel:

Discover New York Times Square: Where New York meets the UK, enjoy an Anglo-American Old Fashioned tipple: a contemporary twist on a classic, this cocktail blends award-winning bourbon and British whisky.
Discover Paris: Inspired by the hotel’s travel connections with the Eurostar route to Paris, this Champagne cocktail has all the flavour and flair of a true Parisienne.

All in all a classy lady 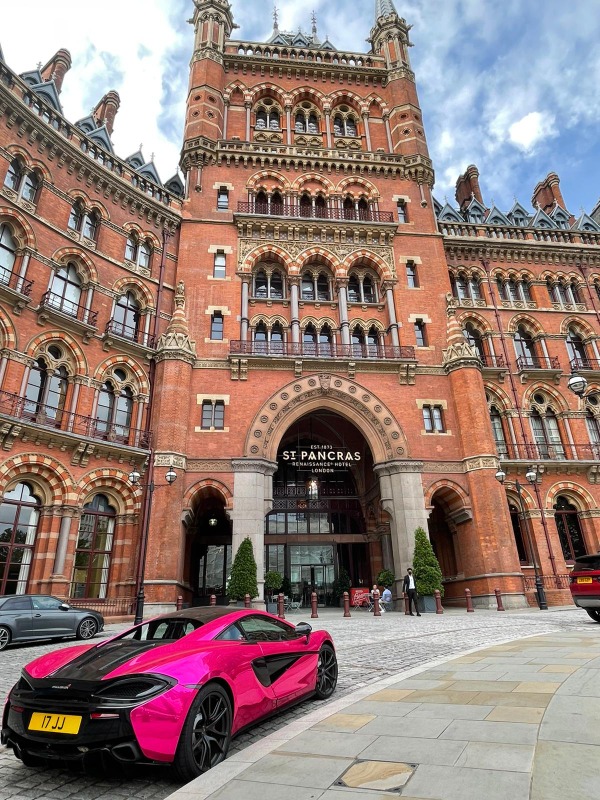 that will charm you with her elegance and allow you to sample the world of high-class living without the need to break the bank.

St. Pancras Renaissance Hotel’s 10 Until 10 stay package is available until 31st August 2021. Prices start at £364 (as advertised on the hotel website).

The celebratory experiences including the Hansom Bar’s 10 Cocktail Menu are available until the end of the year.