State Of The Union: Rachel To The Rescue By Elinor Lipman

Donald J. Trump’s failure to accept the outcome of the most fairly and judiciously executed election in US history might one day be his albatross – his resolute deafness to the clamour of probity is the indignation of a spoilt child who is overfond of wearing the emperor’s new clothes.

A perfect foil for political commentators and satirists, the POTUS would be laughable were he not so dangerously charismatic, especially for the stodgy and credulous millions who have little to gain from his blandishments, but who hang off every monosyllable of his tweets and unhinged pronouncements. He gives them the clarity of meretricious certainty, and one day soon he will be gone.

The clear and present danger of taking a scalpel to the public and personal record of the president is rehearsed at every rally – he can do no wrong in the eyes of his supporters, excluding those in positions of Republican power who pay lip-service to his increasing lunacy whilst hoping for his quiet departure. Which is no doubt why the renowned American satirical novelist, Elinor Lipman, has only very recently secured a Stateside publisher for her fine new piss-take of the Trump administration through the eyes of a slighted White House clerical drone; any, even fictional, besmirching of the current incumbent’s name is potentially libelous territory….or more likely still, the market is quite simply ‘Trumped out’.

All the more reason to celebrate the arrival of Rachel to the Rescue on these shores. Lipman’s great skill is to secure her narrative in the social fabric of the immediate present: couching the story of her leading protagonist, Rachel Klein, in the first person acts to authenticate both the dialogue – of which there is much – and to render a world of which most of us, on this side of the pond, have little knowledge, through the unique experience of one observer. A political hot potato only by inference and association, Lipman’s book is a masterwork of wit, comic timing and plot convolution.

Conceived in the snappy language of the culturally knowing, Lipman’s sentences fizz with the energy of Updike, informed with an intuitive optimism which is key to the securing of good humour in a venal and self-serving landscape. The players in this effortlessly plausible tableau are three-dimensional, more full-bodied than the archetypes they might otherwise represent: the left-leaning celebrity journo whose life’s work it is to pick holes in political risibility; the ice-maiden optometrist whose service to the president extends way beyond the vitiation of his oracular vanity; Rachel’s parents, whose concern for their daughter’s welfare is realised in, often unintended, New York Jewish witticisms; and Rachel herself, whose upbeat bafflement at her own predicament is rarely undermined by the Machiavellian chicanery surrounding two defining moments in her life’s narrative - getting sacked from her, in the event, menial clerical role at the White House’s WHORM department for sending an ill-advised email, and getting run over on her exit by said optometrist, the latter on her way to an assignation with the president. 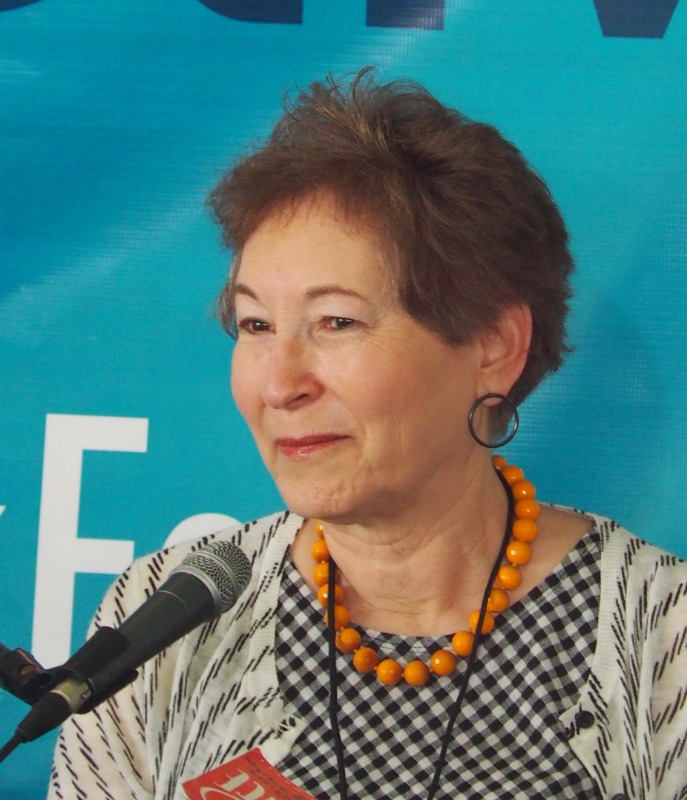 Elinor Lipman
The conjunction of smatterings of dangerous knowledge and the accident, precipitate an escalation of suspicion and mouth-shutting bribes as extraneous circumstances rapidly take on a character of their own. Lipman’s acute dissection of the righteousness of political posturing is set against a mendacious backdrop of media snowballing and competing versions of the truth. Her take on the current landscape is effortlessly savvy, and if our cherished prejudices are not disturbed by her unfolding revelations, we smile at the verisimilitude of fictional suggestion. The novel plays out, as it were, in real time, and Trump, though hung by his own reinforced petard, remains counter-intuitively in tact – his legendary peccadilloes denied in a hail of righteous counter-accusation, his trophy wife (‘mad as in crazy as a bat’) sloping off to ignominy and shopping, like the earlier incumbents of Trump Tower.


Also by Steve Whitaker...
Poem Of The Week: The Wireless By Jean StevensBurned By Light: Dovetailing - Gathered NotesNight Swimming:Towards A General Theory Of Love By Clare ShawPoem of the Week: 'Together' By Robert GibsonReview: Voices of Craven's Summer Jubilee Concert in Skipton
If Lipman’s adept characterisation is realised, in Trump’s case, at several removes – her depiction pays close attention to his conspicuous lack of reflectiveness, and to the phenomenon of government by Tweet – then she comes into her own as she interacts with the other protagonists in this uniquely American narrative. The highly resilient Rachel – upon whom the entire drama hangs – is a fully rounded pragmatist to whom things beyond her control happen, and to which she responds with self-lacerating aplomb. There is, in her White House work, a delicious central irony of which she is wholly aware: she is paid to Scotchtape together the documents which the president has torn to shreds in fits of pique. Making him whole again, to return plumply naked to the stage, briefly becomes her routine as much by accident as by design.

Her paint store-owning parents, insouciant vintner boyfriend, and lesbian lawyer flatmates act as arbiters and advisors at the feast – literally at one point. But the figure of Kirby Champion, Rachel’s new employer who recognises a good thing when he sees one, is a neat fictional counterpoint of knee-jerk womaniser (‘tilting at busty windmills’) and maladroit judgment. His fame outweighs his writerly ability and it becomes increasingly clear that he is professionally propped up by the stepsister/PR, who is also in love with him, and Rachel, whose insight inadvertently foregrounds her boss’s lack of it.

The key to Lipman’s success, here, lies in dialogue: above and beyond the complex thematic agendas of plot and satire are the drivers, the Deus ex machina of conversational asides. Conversation makes Rachel to the Rescue tick, and if this happy conjunction of life celebrants occasionally strays into the territory of archness – Kirby’s magnum opus on presidential indiscretion bears the serendipitous name of its worst tendencies, like another, even more pressing, plague – it is a device intended to embellish the novel’s currency. The final pages of Lipman’s slice of cultural Americana unfold against the backdrop of Covid-19, and an occasional ‘lapse’ in comedic tone – ‘I worried about the people I loved dying’ – overlays the whole with a corrective gravitas which brings narrative resolution.

For the concluding brace of socially-distanced marriages, conducted joyfully in unprepossessing retail venues, and in the Cyclops-glare of Zoom, seem no less than modern manifestations of Austen at her life-affirming, reconciliatory best. Better still, the Midsummer Night’s Dream of a demi-fictional dystopia is returned to the golfing margins of Florida, where it resolutely belongs. The restoring of Donald Trump to his box means that we at least no longer need bear witness to Nancy Pelosi performing approving motions through gritted teeth:

‘Behind Trump, the vice-president was jumping to his feet, leading the standing ovations by the faithful. To his left, Speaker of the House Pelosi sat grim-faced but elegant in white, clapping occasionally for something that aided the poor, the sick, the female, the undocumented’.


Rachel to the Rescue is published in the UK by Lightning Books.