Stereophonics Set To Make A Welcome Return To Scarborough

Stereophonics played a brilliant sold-out show at Scarborough Open Air Theatre – Britain’s largest open air concert arena – in 2018 and fans have been demanding their return ever since. 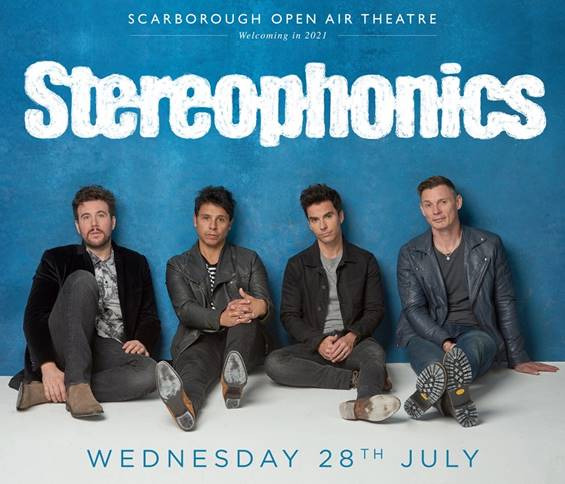 The good news is that the Welsh rockers are returning to the town on Wednesday 28 July.

With almost 30 years under their belt, not to mention seven Number 1 albums and 10 Top 10 singles, it is no wonder Stereophonics are rated as one of the biggest bands to ever come out of the UK.


Also by Graham Clark...
Socially Distanced Down At Everybodys All Day Social, GuiseleyFood And Music Is On The Menu At CrEATe As Part Of Leeds Food FestivalNow Thats What I Call Music 8 Gets A Re-release 35 Years LaterGary Powndland - The New Comedy Star Brings His Sell Out Show To The NorthRyedale Festival Springs Into Life With An On Line Edition
Their 11th studio album ‘Kind’ was released in 2019 and became the band’s seventh LP to hit the top spot in the UK Album Charts,

Featuring the singles ‘Fly Like an Eagle’, ‘Bust This Town’, ‘Don't Let The Devil Take Another Day’ and ‘Hungover For You’, ‘Kind’ sublimely added to a brilliant catalogue of work that includes such classics as ‘Local Boy In The Photograph’, ‘The Bartender and the Thief’, ‘Just Looking’, ‘Dakota’, ‘Have A Nice Day’, ‘Maybe Tomorrow’, ‘Mr Writer’ and ‘It Means Nothing’.

Tickets go on sale via ticketmaster.co.uk at 9am on Friday April 2.