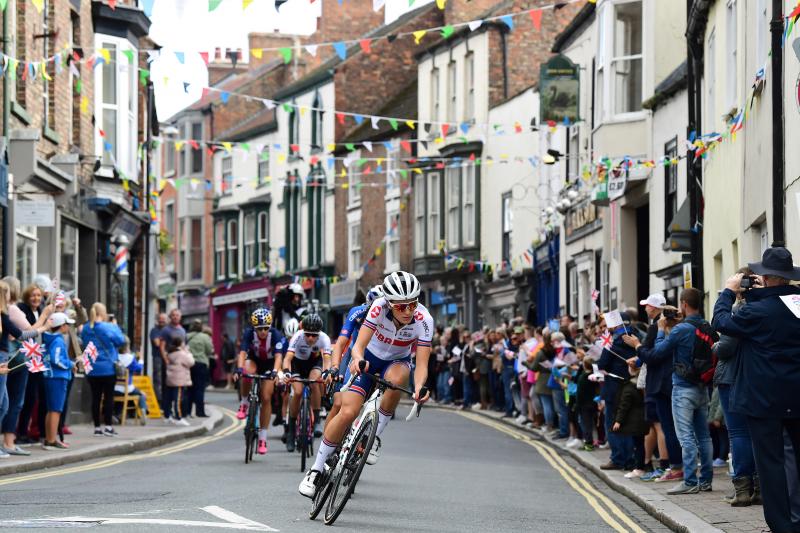 Photo: SWPix.com
Annemiek van Vleuten not only produced one of the rides of the 2019 UCI Road World Championships, but of any Championships ever, as she sealed a stunning solo triumph in the Elite Women’s Road Race.

Van Vleuten launched her race-winning attack with over 100km to go on the Lofthouse climb and never looked back as she evaded her pursuers for over three hours of action. At times the 36 year old’s lead had looked bridgeable, but she pressed on bravely and achieved an incredible victory that will live long in the history books. 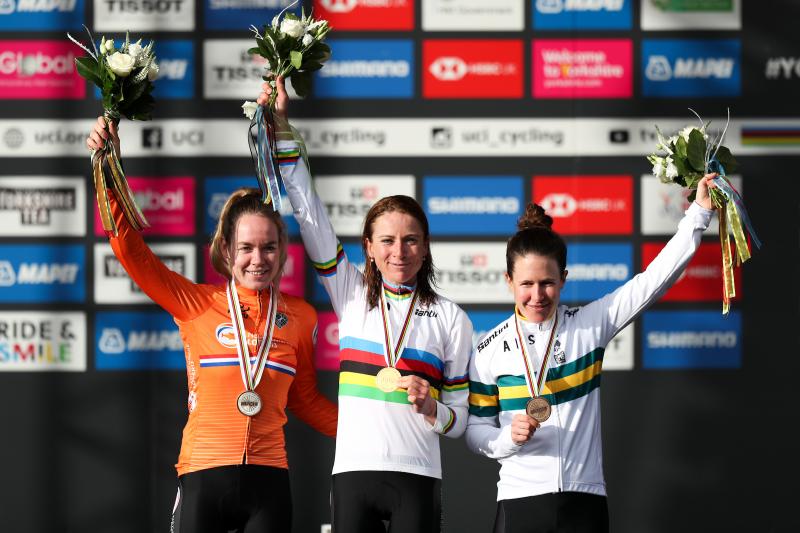 Photo: SWPix.com
Once van Vleuten had crossed the finish line, her team-mate Anna van der Breggen arrived 2min 15sec later to wrap up a Dutch one-two, with Australia’s Amanda Spratt rounding off the podium a further 13 seconds behind.

The weather gods had looked down kindly on Saturday’s racing as all of the 149.4km trek from Bradford to Harrogate was bathed in early autumn sunshine. Vociferous fans cheered the peloton off in City Park and the crowds that greeted them on the Norwood Edge and Lofthouse ascents were comparable with those of the Tour de France which came to Yorkshire in 2014. 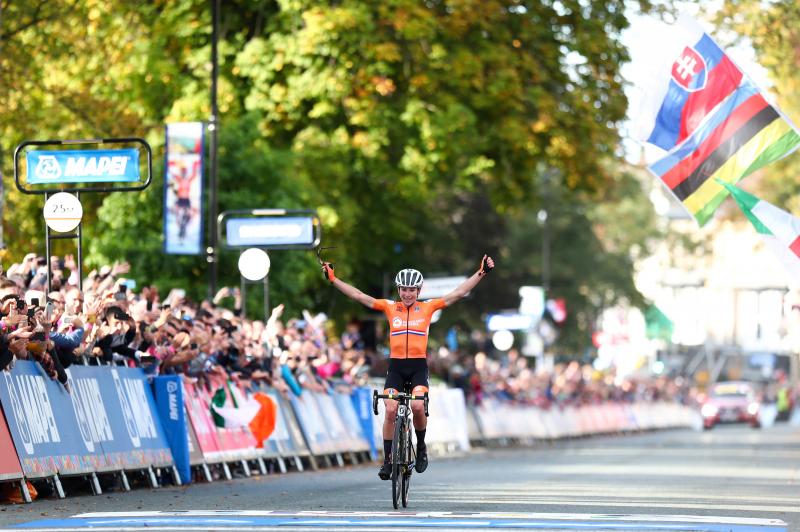 Photo: SWPix.com
The county put on a real show once again, with magnificent land art being beamed to viewers right around the world and at one point even a herd of sheep near Masham were spotted donning rainbow jerseys. 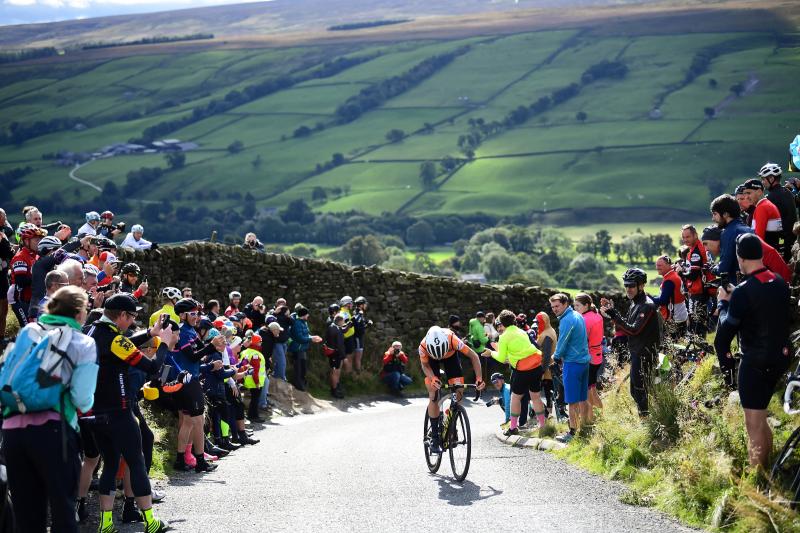 Photo: SWPix.com
The racing was equally spectacular, with Yorkshire’s own Lizzie Deignan producing a courageous ride to try and reel van Vleuten back in before eventually being swept up as she began the final lap of a packed Harrogate circuit.

The day belonged to the Netherlands however, whose medal tally at the Championships now stands at eight with only the Elite Men’s Road Race remaining on Sunday.

Netherlands rider Annemiek van Vleuten said: “That was crazy. I knew the climb was really far from the finish but once I’d attacked my coach told me to keep riding hard and I was lucky I had really good legs. It was definitely not planned but I’d trained so hard for this – put in so many hours on the bike – and I thought ‘if anyone can do this, it’s you’. As I was riding I was thinking ‘maybe I could make history today’, and if it didn’t work out I knew Anna [van der Breggen] was in a great position behind.

“It was only towards the end that I dared to believe, and I was being cheered on by so many fans. The crowds in Bradford were huge at the start and I had so much encouragement out on the course as well. British fans are amazing and I want to thank them all for helping make this win so amazing.”

Great Britain rider Lizzie Deignan said: “Today was absolutely phenomenal and a massive privilege to be able to experience. I’m so grateful for the opportunity to ride a home World Championships and I just want to say thank you to all those people who supported me. It’s a day I’ll never forget and I’m so proud of Yorkshire. Congratulations to Annemiek too, she was in a class of her own today.” 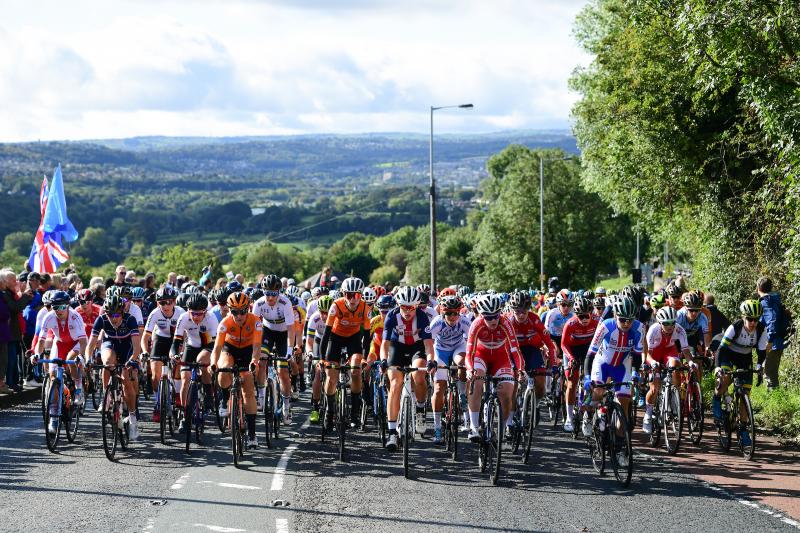 Photo: SWPix.com
Yorkshire 2019 CEO Andy Hindley said: “As Annemiek went on the attack people were telling me ‘you can’t win from that far out’, but she proved them all wrong with an outstanding performance. It was an amazing effort to stay out in front for as long as she did with no help whatsoever, and it’s just a shame Lizzie wasn’t able to go with her when she made her race-winning move.

“We’ve got another Yorkshire star in the form of Ben Swift riding tomorrow, and he’ll definitely be in with a shout of the rainbow jersey. Of course, he’ll be going up against the very best in the business, and I’m very excited to see who’ll come out on top.”

Welcome to Yorkshire Commercial Director Peter Dodd said: “We were treated to another amazing start in Bradford and the land art on the route today was truly world class. Yorkshire’s known for its creativity, as well as its passion and pride, and all those things were in evidence today. It was so nice to see Lizzie on the front of the peloton as she rode through her home town of Otley as well, with her family on the roadside to see her. Congratulations to Annemiek as well for that amazing performance, and all eye turn to the Elite Men’s Road Race now which is sure to be a cracker.”