Swing That Music At Lawrence Batley

The SWING THAT MUSIC tour comes to Lawrence Batley Theatre, Huddersfield, on Wednesday 16th September 2020, in a socially-distanced auditorium. 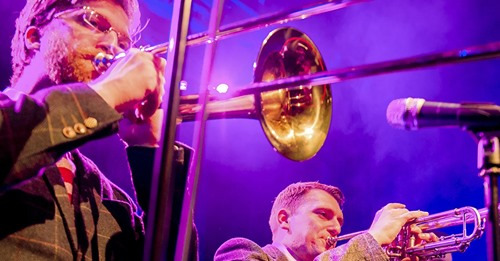 Down for the Count Swing Orchestra
The much acclaimed Down for the Count Swing Orchestra swings across the music of the 1930s and '40s, from the likes of Duke Ellington, Benny Goodman, Count Basie and Glenn Miller. The show recreates the informal atmosphere of authentic jazz clubs, combining top class musicianship with humour and informal on-stage banter.

The tour coincides with the release of Down for the Count’s new album, also called SWING THAT MUSIC, which band leader Mike Paul-Smith describes as 'a celebration of my favourite musicians and singers from the Swing Era. At that time young people were cramming themselves into ballrooms to hear incredible music from pioneering musicians – and our album and show aims to recreate that energy and sound.'

Mike formed the band in 2005 whilst still at school. “We always loved playing jazz and soul music, but it was when we started getting asked to play for swing dance events that we really started to love the big band music we play nowadays. Because the band started when we were so young, we’re only in our late twenties and early thirties now – and we find that audiences are often surprised to see people of our age playing vintage music.'

The band are regulars at London jazz clubs, including Ronnie Scott’s, and have performed at the oldest jazz club in Europe, Le Caveau de la Huchette in Paris, which featured in the film La La Land. The band includes award-winning jazz musicians and West End performers of international repute.

The format of the show means that no two performances are ever exactly the same. According to Mike: ‘We make sure our show is entertaining, bringing our own humour and personalities to the stage, recreating the intimate atmosphere of a jazz club so that every moment feels spontaneous and exciting. Ultimately the music is the star of the show, and we want audiences watching and listening to feel as uplifted as we do when playing. We hope our joie de vivre is infectious and that audiences leave sharing our love for all that swings!’

Down for the Count’s new album is available to buy from the band’s website www.dftcswingorchestra.co.uk.