The Roar Of Thunder Passes Over To 2022

Thunder have announced the rescheduling of their upcoming arena tour to May 2022. The British rock outfit were due to appear at Leeds Arena in May. 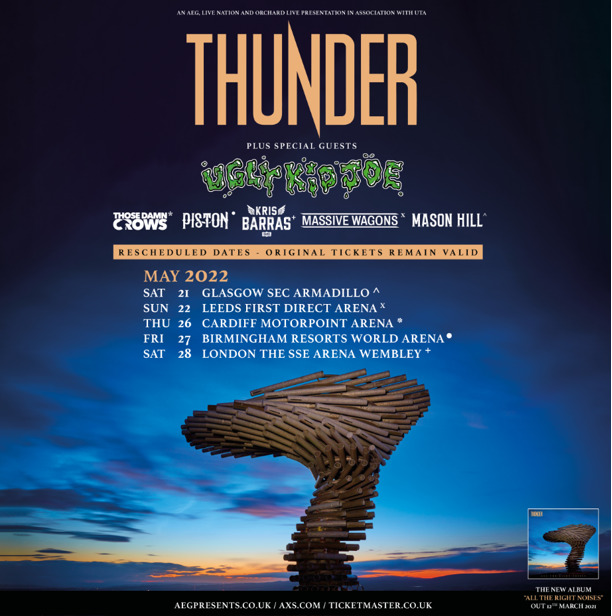 The band says:
"The following is probably not going to be a huge surprise to you.

"Nevertheless, we're very disappointed to announce that in light of the ongoing situation with COVID-19 globally, it's clear that our May live shows can no longer take place in 2021.

"The shows have been rescheduled to the new dates below, and all original tickets remain valid. The bill will be exactly the same at each venue, and the venues are going to need roofers on standby when we finally do these shows, because when we get together with you, the old roofs are definitely going to come off!

Thunder will release their brand new album, ‘All The Right Noises’ on 12th March 2021 on BMG. The album is a return to the full-throttle sound of Thunder that has seen them create a hugely successful 30+ year career at the forefront of British rock. If you have seen the band live before you will know what a live force they are.

The album is an intense confection of illicit charms that reasserts their authority as the number one band in the land, and is as monumental and imposing sounding as the artwork, which features the Singing Ringing Tree – the wind-powered sculpture on the moors above Burnley!

‘All The Right Noises’ follows on from 2019’s stripped back and reimagined album, ‘Please Remain Seated’ which continued their consecutive Top 10 UK Album Chart run since their ecstatically received comeback six years ago.


Also by Graham Clark...
Askern Music Festival Returns To Doncaster This SummerScarborough Spa Gets Set To Re-open This SpringLettuce All Be Happy As The Green Room Is Set To Open In Leeds This SummerNOW - Decades Of Love (Sony Music/Universal Music On Demand)A New Record Label Launches In Todmorden Hoping For Golden Success