Tales From Beyond The Grave 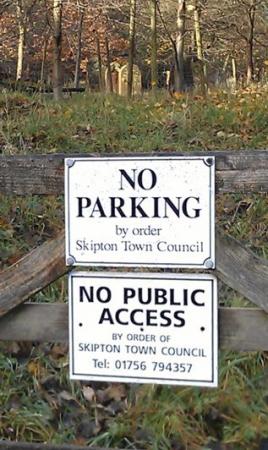 Walking down Skipton's Raikes Road into town, a casual passerby might briefly glance at, but hardly notice, a burial ground tucked away behind a wall. The trees lining this quiet plot are bare now, and without leaves. A notice on the gate forbids public access.

Yet Jean Robinson's fascinating talk for the Friends of the Craven Museum, on the 13th November, gave me a real insight into how many stories this Victorian graveyard, open between 1846 and 1876, still has to tell us.

This interdenominational burial ground, an overspill from the parish church, has about 2,000 people buried here and approximately 190 stones in various stages of decay. A chapel was present on site, at one time. Another building, probably a mortuary, was used as a hearse house later on.

The class system goes beyond the grave

As early as 1803 there were problems with the numbers of people being buried both within the parish church and in its graveyard, which had to be extended in 1826. A report from the time describes pews of the congregation 'raised upon foundations of putrefaction'. Even after the installation of gas stoves in 1843, a government inquiry reported that 'the rank vapors were drawn out in uncontrollable profusion!'

In 1847 a meeting was called of those who wanted the parish church burial ground closed. The trouble was that rich families believed that the nearer they were buried to the altar, the nearer they were to God. By 1855 wealthy Skipton families were choosing to be buried at East Marton, Elslack, or Thornton in Craven, or anywhere other than Raikes Road Burial Ground.

Yet gradually, this prejudice passed. But even in Raikes Road the class system had reared its head. It's still possible to make out an expensive end and a poorer end. Skipton's poorest are almost certainly buried at the latter end of the ground, just where a drain runs through the site.

Each grave tells a story

Even here however, life abounds. The site teems with wildlife. There are fourteen species of trees, twenty-four types of flower and three hundred species of lichen. But what is most interesting is what we learn about the people buried there. 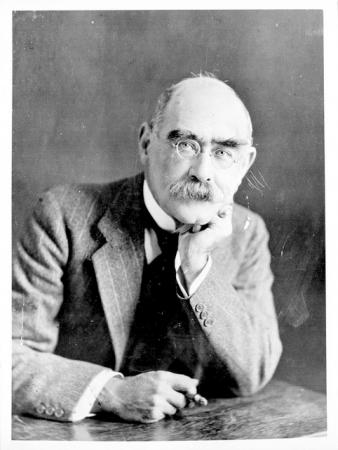 Rudyard Kipling - Photo by CWGC
Such as the many wealthy families buried here, like the Birtwistle family, cattle drovers, and the same Thomas King, a corn merchant, who has a stained glass window dedicated to him in Skipton Parish church. Or perhaps the closest we get to the famous here - Rudyard Kipling's grandparents, the Reverend Joseph and Mrs Frances Kipling, are buried in Raikes Road. Mrs Kipling ran a school on Otley Street and Rudyard came frequently to stay there.

Some of the gravestones speak of tragic tales. In 1857 a spike in the death rate saw the the Simpson family, blacksmiths on Mill Street, wiped out within ten days due to an outbreak of scarlet fever that year in Skipton.

Henry Ingham, eight years old, died in 1865 after getting his head caught in machinery at Sidgewick's cotton mill.

And then there's the grave dated November 1861 of Margaret Rosebottom, aged twenty one, a cattle drover's wife. Research shows that, after folding up her clothes on the banks of the canal, she threw herself in and drowned - the grave of Thomas Rosebottom, dead by July 1861 aged eleven months, perhaps explains her motivation.

The two biggest memorials are to successful entrepreneurs, Robinson Lockwood, a grocer, who remarkably enough was also instrumental in getting the railway to Skipton, and John Greenwood, wine and spirit merchant. These entrepreneurial men have modern monuments which would not have been allowed in the parish church.

Skipton has its share of war dead too, of course, including Richard Shackleton whose name appears on the bottom of his grandparents' stone. He was a railway engineer who joined the Australian Imperial Forces and fought at Gallipoli and dies at Ypres. He is commemorated on the Menin gate as well as at Skipton.


The very-much-alive Jean Robinson, who's been researching this burial place for years, finished this spellbinding talk by mentioning 'Friends of Raikes Road Burial Ground'. Under the auspices of Skipton Town Council, they're seeking to preserve this fascinating burial site and enhance its landscape and access for the curious.

Sadly, Raikes Road Burial Ground, like many others throughout the country, is currently under threat from a government seeking to reuse old burial sites.

The next talk of Friends of the Craven Museum is on 'Bell Busk Railway Station: A bustling hub of farming Industry and Tourism 1850 -1939.' The talk takes place in Skipton Town Hall Annex at 7.15pm. Visitors are welcome.