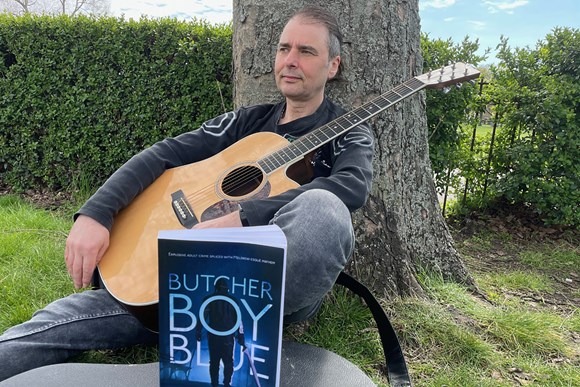 Since graduating from Teesside University in 1997 with a master’s degree in Information Technology, Paul has discovered his passion for writing.

Set in Hartlepool, the story follows 19-year-old Mo, who finds himself in a world of trouble when he becomes embroiled in multiple murders. With no alibi and all evidence seemingly pointing to him, the action-packed plot unfolds with Mo becoming entangled in mountains of mayhem – Victor Meldrew style – as the clock ticks and the net closes in.

Paul was excited to release the novel, which he says was five years in the making thanks to the twists and turns in the story and his determination to bring something new to the crime genre.

He said: “Butcher Boy Blue was a long time in the making, mainly because I was very ambitious with the style, intrigue and big twisting plot.

“Conceiving all the conundrums, mystery and suspense was a big challenge, but not as much as having to find answers to each poser then weave it all together. To achieve that meant getting into detective mode myself.

“Luckily, I get a kick out of challenging myself and enjoyed solving what was effectively a five-year puzzle.”

Paul added: “I’ve lived in various places including London, Greece, Scotland and the French Alps, but I’ve always found that all roads lead back to the North East. Besides, a hero from my hometown is long overdue.

“Now the novel is finally out there, there’s a tiny touch of pride, but my overwhelming sentiment is still mostly surprise that I’ve achieved what I set out to do.

“My main hope isn’t fame, fortune or commercial success, but simply that readers will love the book and be very glad they read it.”

Butcher Boy Blue takes its place among Paul’s published work, which includes guidebooks aimed at helping people forge a successful career such as The One-Page CV, which is published by Pearson.

Paul’s creative talents also extend to songwriting, as he composed and performed a song, titled Blueboy, inspired by his crime novel.

On writing the song, Paul said: “I didn’t realise I had a creative bone in my body until my friend let me play his guitar when I was around 21. Discovering I could make tunes, lyrics and songs was a wonderful surprise.

“It’s unusual I know, but I tend to write songs about people and things that I’m passionate about, so writing Blueboy seemed the natural thing to do.”

Paul is now writing a book outlining his experience working on Butcher Boy Blue, which he hopes will give existing and aspirational authors advice and guidance, as well as new insights into the behind-the-scenes world of writing a novel.