The Author Behind The Cut

The inspiration for Chris Brookmyre’s The Cut, came from a newspaper article reporting that students in Scandinavia were being offered cheap accommodation if they would share it with much older people.

"It inspired me to think what it would be like to bring two generations together where the student got decent quality accommodation for very little money and the older person companionship. 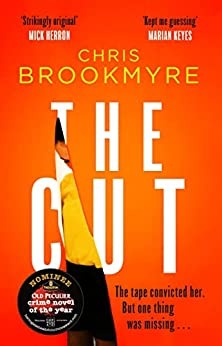 “What could these different generations teach each other and what, if anything, might they have in common. So, the idea of a film studies student living with a make-up and special effect artist, who had worked on some of the movies he regarded as legendary, was just a fascinating dynamic to explore.

“People also make a lot of assumptions about different generations especially between old and younger, so I wanted to challenge those assumptions.”

It certainly sounds as if Brookmyre had fun especially when we chat about the symbiosis between the psychology of how the older of the two main characters, Millicent, reacts to the situation and how that reaction dictates the plot.

In the case of The Cut, Millicent is recovering or readjusting from life in prison which creates all kinds of problems that as a writer, Brookmyre found interesting to address.

“Millicent is angry at the world and really doesn't feel she belongs in it anymore. Which I guess makes the storytelling challenge to convey that convincingly to the reader, but also to convincingly show the journey where she starts to re-embrace the pleasures that life has to offer.


Christopher Brookmyre ©Chris Close H&S 2015 Reproduced with permission.
“Ultimately, The Cut is a very life affirming book about someone who is discovering the joy of life.”

And Brookmyre used his experience as a journalist working for Screen International back in the late 80s and early 90s. “I went to Cannes every year to cover the Marché du Film.”

“It mostly dealt with exploitation movies and straight to video movies, the less glamourous end of the spectrum. I grew up as the first time home video generation with all the moral panic around video nasties and the massive media and political hypocrisy. I’ve been waiting years to find the right book to address the issue of the video nasties and inform about the hysteria we saw back in the 1980s. “

Chris tells me he puts a lot more work into planning these days and realises his film background helped.

“I read a book about storytelling structure in screenplays and realised I had been doing this my whole career because I had watched so many movies. There was a certain rhythm to it that I instinctively tended to mimic.”

Chris also brings humour into his stories. “It is always my natural idiom. For my first dozen novels I was very irreverent and satirical because I was just thinking of my natural voice that I tended to channel. Since then, I realised if I throw in humour, it can dissipate the tension and over time, I have learnt how to strike the balance.

“With a book like The Cut there was always an opportunity for black and character based humour. Just having someone that is as a cantankerous as Millicent with her sharp tongue, she's always a problem in any given situation, so there is humour but without sacrificing the emotional impact of the character.”

A TV adaptation of The Cut is in development with Glasgow-based production company Highland Midge and Chris and his wife Marisa are currently writing the scripts. Chris is used to collaborating with his wife as they collaborate under the pseudonym Ambrose Parry on 19th century medical historical crime thrillers.

As for the next book The Cliff House, his main character Jen is having a hen party on a luxury getaway on its own private island. The helicopter won't be back for seventy-two hours. Jen and her six friends think they are alone. It's a combustible cocktail, one that takes little time to ignite, and during the drunken chaos, one of them disappears. Then a message tells them that unless someone confesses her terrible secret to the others, their missing friend will be killed. The problem is everybody has a secret. And nobody wants to tell.

"A psychological thriller about who you should trust in life, it is very much about friendship, who your real friends are and who you can trust."


The public are now invited to vote for a shortlist of six titles at www.harrogatetheakstoncrimeaward.com. Voting closes on 26th May, with the shortlist announced and winner voting opening on 14th June. The winner will be revealed on the opening night of Theakston Old Peculier Crime Writing Festival, Thursday 21st July, receiving £3,000 and a handmade, engraved beer barrel provided by T&R Theakston Ltd.

The longlist was selected by an academy of crime writing authors, agents, editors, reviewers, members of the Theakston Old Peculier Crime Writing Festival Programming Committee, along with media partners the Express. The award is run by Harrogate International Festivals sponsored by T&R Theakston Ltd, in partnership with Waterstones and the Express, and is open to full length crime novels published in paperback 1 May 2021 to 30 April 2022 by UK and Irish authors.
Also by Andrew Palmer...
Classical Music Album: Coleridge-TaylorThe Weekender: Drinking Farrer's Coffee With Rob BainesThe Author Behind Dead GroundFantastic Frankie A Tale For Our TimesThe Author Behind Watch Her Fall
More in this series...
The Author Behind Dead GroundThe Author Behind Watch Her FallThe Author Behind The TrawlermanTheakston Old Peculier Crime Novel Of The Year 2022 Longlist Announced