The Author Behind The Trawlerman

I am hoping I haven’t distracted William Shaw from his writing schedule. He gets to his desk by 8.30am and likes to keep going until he has had enough!

The author of The Trawlerman, which appears in the longlist for the Theakston Old Peculier Crime Novel of the Year, has taken time out from his writing to chat about the book.

William Shaw
One of the book’s themes is around mental health and Shaw tells me that as somebody with quite robust mental health he found it interesting trying to imagine himself as the character, seeing how, when she has to work, she perceives the world differently and not always wrongly. He hopes it rings true.

In The Trawlerman, officer Jill Ferrier is charged with investigating the murders while her colleague Alex Cupidi is on leave and Shaw tells me that Alex came about in two ways. “Cupidi is the daughter of a character in another series so I kind of knew who she was when I was writing her. I thought about what it would be like to grow up with the daughter of this woman. Also the other way that characters emerge is like the strong central character in one of my other books, The Birdwatcher, who was a birdwatcher, a very self-contained sort of person. You kind of need somebody messy next to that person to make the character work. I created Alex initially as a secondary character, but I liked her so much that I decided to start a series based on her.” 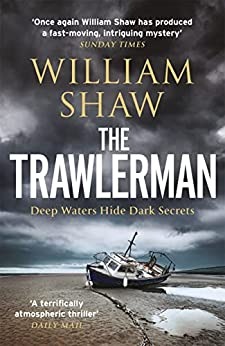 As part of his research for The Trawlerman, Shaw went out on a trawler to learn what was involved. “It is important for me to build real worlds as it confounds your land lovers expectations. “I always find out something different about how things work. It was astonishing to see what a phenomenally dangerous place trawlers are. But it is also fun and great to do. All too often we sit at our desks, so any excuse to get out there and do something different is welcome. I went out with a lovely and a very generous fisherman who showed me the ropes, telling me what was plausible and what wasn’t.

“It was also in the middle of lockdown and going out in The Channel and looking back at a very quiet England was an amazing experience.”

Shaw tells me that the way the genre observes the real world gives it its power and the popularity of the Theakston Old Peculier Crime Novel proves the point.

“Crime is the most dynamic form of writing going on now in the UK. It is interesting how crime talks about other things too. It’s a mixture between the real world and the sort of fantasied world of murder and grisliness that creates a fantastic powerful genre.

“Crime fiction has always been popular but if you look at the last five years it’s become extraordinarily so. Pretty much everything on TV and in the bookshops is crime related,” he says.

“You’ve got to build a real world in order to scare people and the genre has got increasingly realistic in lots of ways, not all of it though, there is a counter argument to be found. But the great thing about crime is that it can build a real world but one that can no longer be clichéd especially if it is a psychiatric thriller; it's not just a case of a murder in the Vicarage somewhere anymore, it is about putting stories into this modern context and that gives it a strange power.”

Conscious I may have distracted his flow I want to get a couple more questions in about how he writes and creates pace and development of plot twists.

Interestingly, he tends to write by nailing one plank to the next before moving on to another one and that gives him the experience of feeling like a reader.

“If I know when I nail the next plank that the reader needs to feel more tense, I can add in the tension. But I never know where I am going and neither does the reader so hopefully, I am in their shoes!

“Occasionally I may rip up and start again but it’s a more entertaining for me. As to the twists, sometimes I realise I have got to point X and what I thought as I look down the wonky lines of planks is that several planks are completely wrong, which is when I must distract the reader and do something else. It’s often then when you appreciate the person didn’t do the crime someone else did or the thing, I thought was bad, was quite innocent. It is the feeling that something must change so what could I possibly change. For me and possibly others, the twists just happen.”

I ask about characters: are they based on anyone or have an autobiographical slant? Not quite, but like us all who write he makes copious notes.

“I used to write columns for The Observer, and I would get to talk to eccentric people. Real life is so strange that when you try and put it in a book it often doesn’t work. One needs more consistency. So, in my books there are bits of people but never a whole person. I take little bit of things I hear on the bus and there are also aspects of my daughter in the main character’s daughter, Zoe, but it is not my daughter.”

Shaw’s next book is a high stakes thriller set on a Russian oligarch's super yacht, and as I begin to wonder about his research and what could be the consequence, I think it time to bring the interview to a close.


The public are now invited to vote for a shortlist of six titles at www.harrogatetheakstoncrimeaward.com. Voting closes on 26th May, with the shortlist announced and winner voting opening on 14th June. The winner will be revealed on the opening night of Theakston Old Peculier Crime Writing Festival, Thursday 21st July, receiving £3,000 and a handmade, engraved beer barrel provided by T&R Theakston Ltd.

The longlist was selected by an academy of crime writing authors, agents, editors, reviewers, members of the Theakston Old Peculier Crime Writing Festival Programming Committee, along with media partners the Express. The award is run by Harrogate International Festivals sponsored by T&R Theakston Ltd, in partnership with Waterstones and the Express, and is open to full length crime novels published in paperback 1 May 2021 to 30 April 2022 by UK and Irish authors.
Also by Andrew Palmer...
The Author Behind The CutClassical Music Album: Coleridge-TaylorThe Weekender: Drinking Farrer's Coffee With Rob BainesThe Author Behind Dead GroundFantastic Frankie A Tale For Our Times
More in this series...
The Author Behind The CutThe Author Behind Dead GroundThe Author Behind Watch Her FallTheakston Old Peculier Crime Novel Of The Year 2022 Longlist Announced