Between a bookmaker’s and a barber’s, in an ordinary shopping street in the West Riding, you would not necessarily expect to find something as extraordinary as Bier Huis. 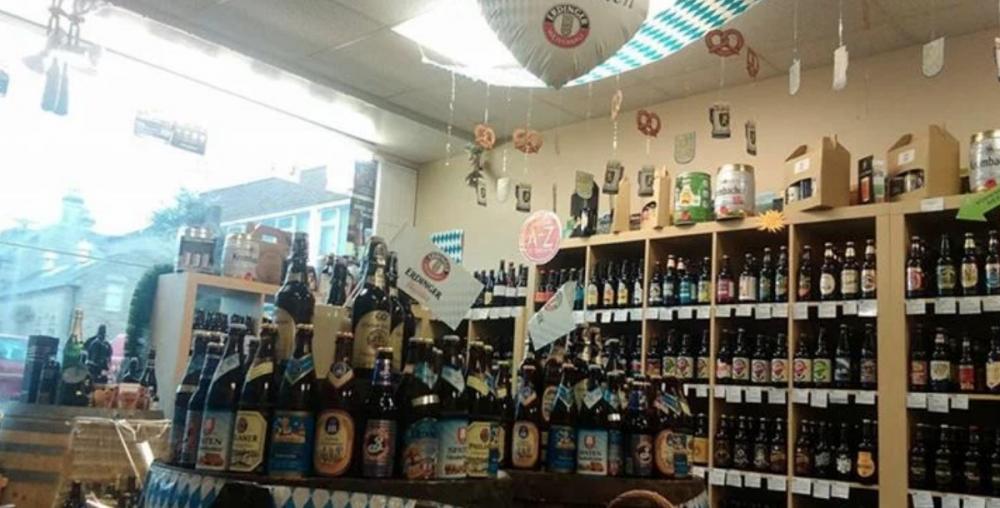 Although it has been here since November 2011, the ‘cross between an off-licence and a microbar’, as its owner David Jones describes it, still seems like an exciting new concept.

I enter like the proverbial kid in a sweet shop casting my eyes in wonderment around the place with a Belgian name but as Yorkshire as the honest little town of Ossett itself, where it is to be found in Towngate. It’s an Aladdin’s cave of bottles and cans, beers, ciders, wines and spirits. Originally it was to have been called Yorkshire Bottle until David discovered that had been taken already by a Doncaster gas-bottler. ‘So then I decided to go for something a bit different,’ he says, ‘a bit special!’

The first thing that meets you as you enter is the wall of Yorkshire beers, an immense quantity alphabetically arranged by brewer, some 200 different varieties, representing about 60 per cent of brewers in the county. It’s an intoxicating experience just looking at the solid walls of bottles and cans, all colourfully parading themselves in serried ranks. He’s also got sections no less impressive on other UK beers, gluten-free, low and no alcohol and world beers.

All told, he’s got 500 different varieties and stocks of over 5,000 bottles and cans, probably seventy percent of them bottles.

I ask him what is selling best. ‘We always sell a lot of the local Ossett Brewery’s beer, ‘he says, ‘but at the moment I can’t keep up with the demand for Sam Smith’s. Normally I take a delivery every two or three weeks but now I’m getting two deliveries a week.’

Sometimes he finds himself simultaneously taking a delivery from one brewery at the back door of his shop whilst another is coming in at the front. ‘It can be a bit hectic,’ he concedes.


Also by Andrew Liddle...
Beer Of The Month Of June: Frothingham BitterThe Wednesday Wallop: Ilkley Brewery Offers Hope To Slake Summer ThirstAn Ayckbourn Premiere In Your Own HomeBeer Of The Week: Hambleton Brewery’s Beautiful NightmareWednesdays’s Wallop: Cragg Bitter From Little Moor
The shop is busy, probably especially so for a Monday morning, but then over-the-counter and on-line sales are up at the moment, although he has temporarily lost his beer-tasting evenings and a full range of events where he provided the bar. David jokes with his customers, all impeccably observing social distancing, as he serves them and advises on beer types. From the relaxed jovial manner you would not think that here is a man who has not had a single day off since the first day of March.

He is pretty much on his own at the moment with his wife, Sarah, having to stay at home to look after the two children but he does have one part-time shop assistant.

So who has a taste for such a wide variety of Yorkshire ales – probably the widest selection in Yorkshire. He smiles: ‘we do get a lot of “beer-tickers”, who go on the Untappd app to tick off they’ve tried another one.’ He goes on to explain that there are lots of people out there who are just curious and adventurous to try new tastes. ‘Lots of people like to try new blondes!’ He also uses his twice-monthly beer-tasting evenings to encourage people to broaden their horizons. People on his mailing list are occasionally alerted to the arrival of something special.

Not least, there’s the licensed bar where you can also get draught, from normally a choice of three casks. It’s no surprise by now to hear that Bier Huis won the award as Independent Retailer of the Year, in 2017 and has been a runner-up in subsequent years.

Yes David was right: this place is a bit special. A lot special in fact.

The shop is open seven days a week, 9.30am to 8pm. Details of home delivery will be found on their website: bierhuis.co.uk/