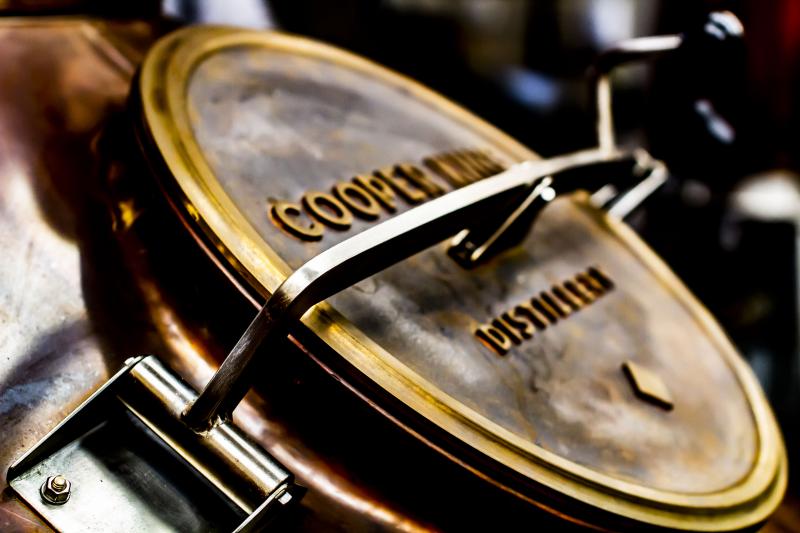 Photo: Gemma Birbeck Leuly Photography and PR
There are many components that make for an award-winning gin or whisky.

And the two entrepreneurs that started the craft Cooper King Distillery, in the Vale of York, understand what it takes to satisfy the nose, the palate, the feel and the taste.

It’s not just the ingredients, of which the provenance for the Cooper King Distillery brand, is very much Yorkshire.

If you take a biochemist and an architect you get a mix of passion, imagination and precision plus a splash of magic.

“This was quick. Our backgrounds enabled us to be focused and regimented,” Ms Neilson said. Adding that “the days were long, 14 hours 7 days a week.”

Their story is fascinating and there is so much to find out, so I am keen to get on, as there is a promise of a taster at the end of the interview,

The duo work well together sharing the same beliefs and values, not least how to build sustainability and green credentials into production. It is clear that they came to the green argument long before it became mainstream.
It all started as an adventure when the pair decided to travel five years ago

“We were in our late twenties living in Leeds and both recently qualified in our respective professions. At that time our friends were getting married and starting families but we knew that was something for later. So much to our parent’s dismay, we quit our jobs and bought one-way tickets to Australia,” Mr Jaume explained.

“We had no plan of action. We just set off travelling. When we landed in Tasmania, a month after arriving in Australia, there was a lot of excitement around whisky. A Tasmanian brand had just won the accolade: the world’s best single whisky.”

They were living a backpacker lifestyle, picking fruit during the day, getting paid a cent per apple, in order to extend their visas, and living in the back of an estate car with nothing but cuppa soups to keep them going.
It was then that their entrepreneurial spirit started to show itself.

“We were quite opportunistic. We had friends back in the UK who had a whisky blog. So, we messaged them asking if they wanted us to visit the distillery, get content and take photos,” Mr Jaume said.

It turned out better than expected for the couple. Their friends leapt on the idea and instead of just the one distillery, they were asked to visit all 8 on the island, all expenses paid.

“We led this bizarre double life. During the week we were living in an estate car picking fruit and at the weekends travelling to the distilleries, located in beautiful spots, and talking to the owners. They thought we were whisky experts from the UK who had been flown out especially,” Mr Jaume said.

Picking up the story, Ms Neilson explains that the first distillery the duo visited belonged to a rye farmer, with no background in whisky. It turns out he had grown too much rye one year and thought he would “crack on and make some whisky”.

The duo soon become hooked and started analysing all they had learned. The recurring theme was that none of the people they met had any real industry experience, “had not come from Scotland nor had £10m in the bank”.

That was it. Having always known they “wanted to work together in some capacity” and what with their love of food and drink, their fate was firmly sealed and the decision made to quit their jobs, live the dream and create their own distillery.

“Meeting these people was really inspiring and over the next two years the idea really snowballed, unchecked on the other side of the world. Over the following two years we spent time in Australia, Japan and Austria, working at distilleries and breweries, tasting a lot of spirits and trained our noses in the fineries of what constitutes a good whisky,” Mr Jaume explained.

The chap who was responsible for the world’s best whisky cask, Bill Lark from Tasmania, taught them, and armed with this knowledge they arrived back in the UK with a 50-page business plan, an “Ozzie twang, deep tan and pair of flip flops”.

It was not surprising that a major high street bank rejected them for a loan.

Undeterred, but with a reality check, they knew that a fair bit of cash had to be raised and they set about devising a crowd-funding campaign- their Founders’ Club. To their surprise they soon had 400 supporters from across the world: Japan, German and the USA, all of whom pitched in funds in return for rewards later down the line.

“We set up a limited company and sold equity. We had never run a business before so this was a steep learning curve,” Ms Neilson explains.

They even got a letter from a government office informing them that they could not register the company name if it had ‘King’ in it, as it implied ties to the royals. As you would expect this was not an issue either.

“Luckily for us we have these detailed family archives that evidenced the name Cooper King and its rich historical ties to England and Yorkshire. Born in 1843, Charles Cooper King, who was Lieutenant Colonel of the Royal Marine Artillery and my great-great-grandfather, traced the Cooper King family history back to 1030, where he identified the Pigot family of Yorkshire, whose shield can still be seen today throughout Ripon Cathedral,”. Mr Jaume explained.

“We bought an acre of land from Abbie’s parents that had an old stable block, which we knew we could convert after I put my architectural skills to use and successfully applied for planning permission. We thought this would be just right.”

When the engineer came out, however, he took one look at the concrete floor slabs and declared that the brewing vessels would be too heavy. So, they had to take the concrete slabs up. 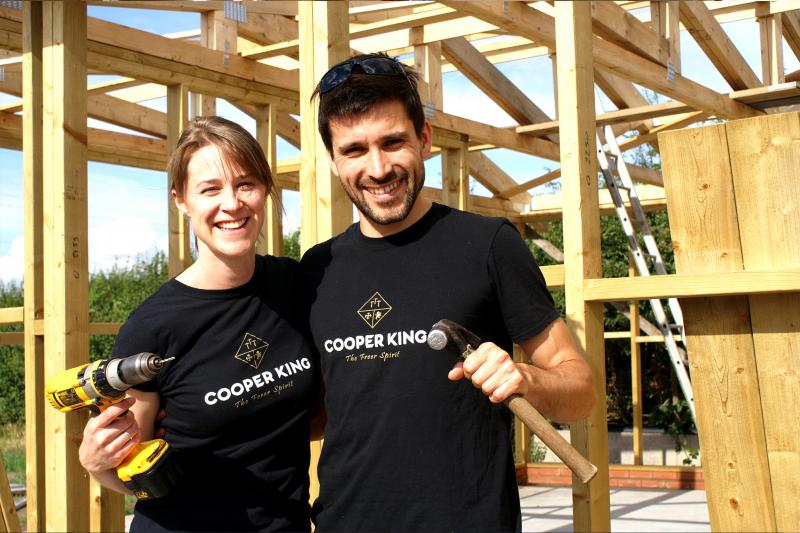 The duo building the distillery
“There we were thinking we had the building, only to find out we had to dismantle it and start from scratch,” Ms Neilson continued.

It could have put some people off but not these two.
Also by Andrew Palmer...
New Rules Mean Shops Can Be Converted Into Homes Without A Planning ApplicationNumber Of Yorkshire Workers Planning Career Changes Due To Pandemic RisesYork Gins - The Perfect TonicThe Business Interview: Kirsty HenshawNo-nonsense Coffee Brand, Fireheart Coffee, Shakes Up The Elitist Coffee Industry

That’s when the architect and scientific training came in handy and the duo got friends and family to pitch in. They couldn’t afford builders, so everything had to be done by themselves.

Even lifting up the roof trusses weighing 200 kilos a piece needed help as there was no budget for lifting equipment.

When a mate phoned and said he was choosing York for his stag do, as he was not interested in visiting European cities and wanted to do something productive instead, Mr Jaume jumped on the idea and invited them to stay.

A few months later 12 strapping lads descended on the quiet village of Sutton-on-the-Forest to spend the weekend building. “They thought they were going to have a nice weekend and help out a bit. I put them hard to work and we put up the entire timber frame in one weekend.

“It was a fun challenge for me. I was more used to working on precise CAD drawings measuring things to the nearest millimetre, and here I was on a building site with 12 guys, all with a hammer in one hand and a beer in the other. None of them had built anything before - they did a sterling job.”


Launch day
Everything was finished February last year and the first gin launched in May. Earlier this year it scooped a World Gin Award and one from The Gin Guide.


The Tasmanian copper pot still
In June 2019, Neilson and Jaume turned to whisky production which is now up and running. Locally grown Yorkshire barley is traditionally floor-malted in England’s oldest working maltings, before being mashed and fermented at the distillery. It will then be distilled in the 900 litre Tasmanian copper pot still, which is the only one of its kind in Europe, specially built and imported from Tasmania.

“Our time in Australia changed the course of our lives. We got caught up in the ridiculously positive and enthusiastic way Australians seem to approach everything, and spending so much time with distillers over there enabled us able to hit the ground running when we returned. It was brilliant for us,” Mr Jaume explained.

Interestingly the training they received was all around whisky making. Nothing on gin. Everything on that front was self-taught: months of research, lots of talking, drinking and attending Expos, as well as a one-day training course at a distillery school In the UK.

“We knew we wanted to use vacuum distillation, due to the clarity of flavour the method could achieve.”

“Approaching the development of the gin like a whisky drinker, was for us, important. It’s all about the aroma, the palate, the texture, and the finish. It was all geared around creating something enjoyable that could be drunk neat rather than just drowning it with some tonic,” Ms Neilson added.

Next came the recipes which were developed on paper. They knew we wanted to use honey, as Ms Neilson’s father is a beekeeper and they wanted to use locally grown Yorkshire lavender. 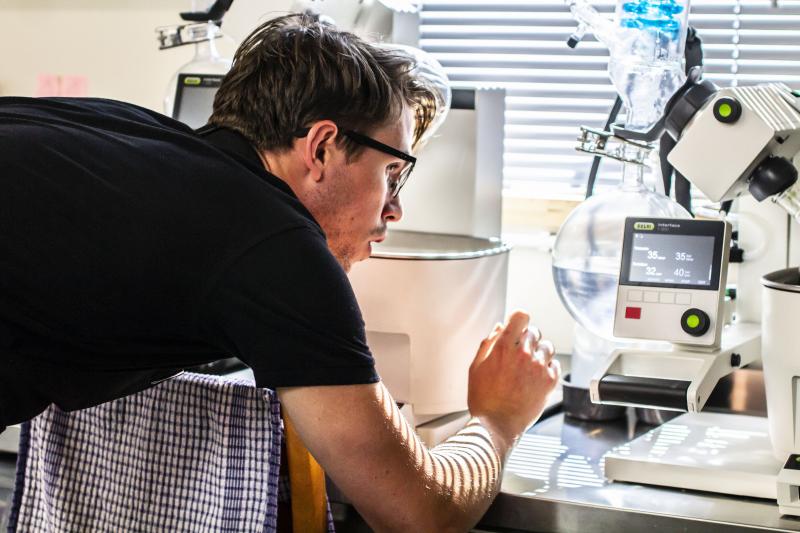 A technician working on a batch of gin
“We ended up with three recipes, which went out to tasting panels across the country, consisting of 100 friends, family and gin enthusiasts, which covers most people these days! We asked for their feedback and the honed the final recipe from their comments. We were conscious all along that because this is not our background or industry, it was important to seek as much advice as possible.” 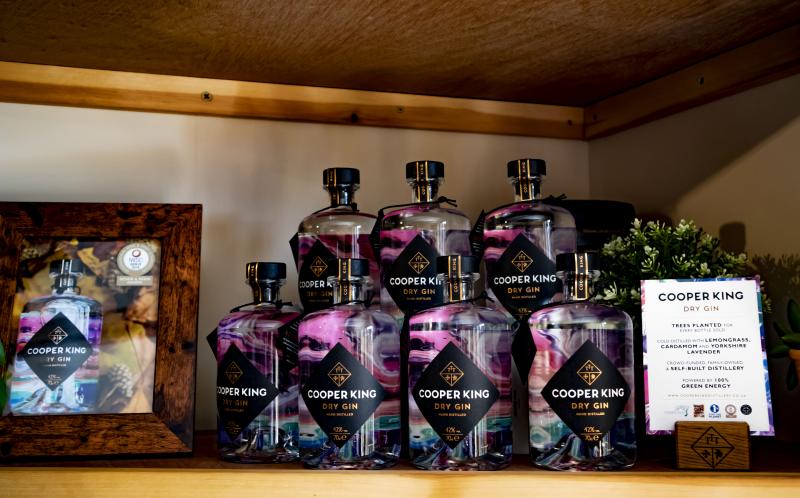 All of it is produced in micro-batches of only 120 bottles at a time. The Cooper King Distillery uses innovative cold vacuum distillation in a process that’s tailored to suit each individual botanical, ensuring they extract the freshest, fullest flavours.

With that in mind it was time for a taster and the gin certainly lived up to expectations. 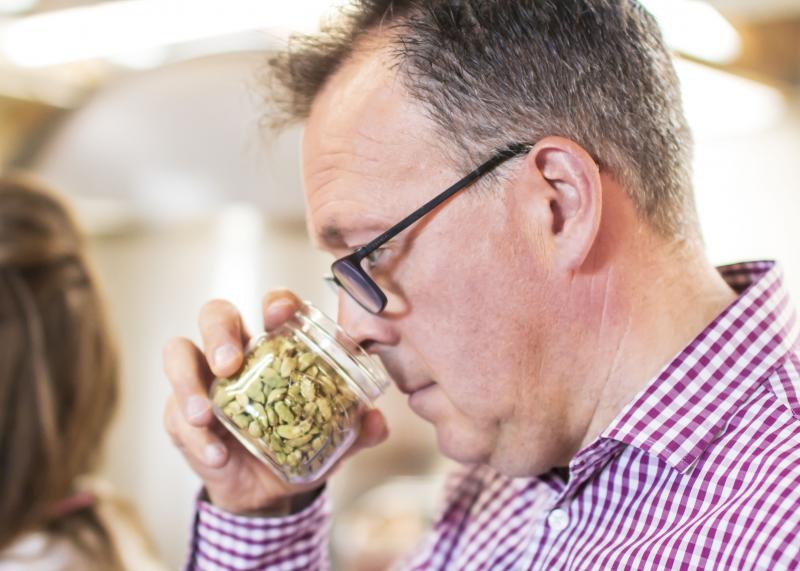 Business Editor Andrew Palmer looks and smells some of the ingredients

Cooper King and the sustainability agenda
The distillery is powered by 100% green energy. Furthermore, the distillery includes a closed-loop cooling system that has already saved 13 tonnes of fresh water since opening in June 2018

Cooper King is the first distillery in Europe to join international environment initiative. 1% for the Planet, which sees at least 1 % of sales of Cooper King Dry Gin contributed towards environmental non-profits. 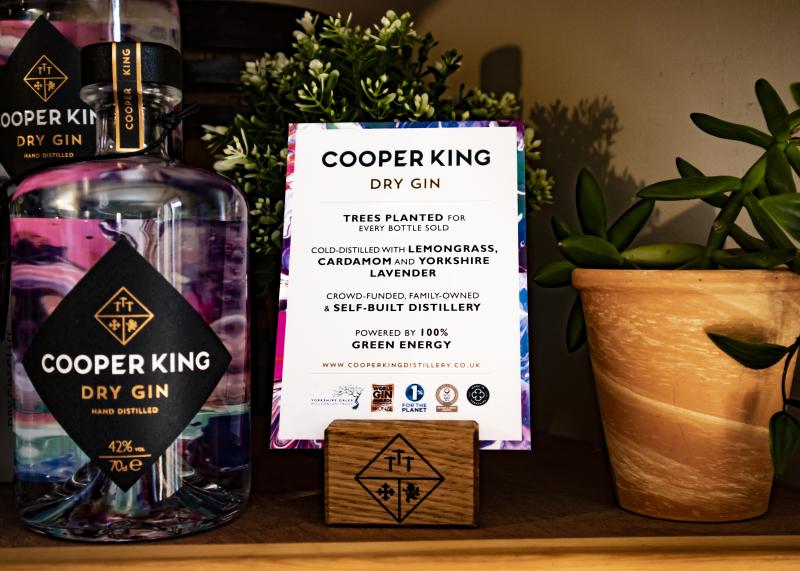 The distillery plants one square metre of native woodland for every bottle sold through a partnership with the Yorkshire Dales Millennium Trust.

In a further bid to protect the environment, Cooper King Distillery cold-distil the gin before bottling it in a lightweight alternative to heavy glass bottles favoured by premium spirit brands. Each bottle weighs 300 grams less on average, uses les raw materials and is lighter to transport. Thus, reducing damaging CO2 emissions.

All deliveries are made in plastic-free packaging thanks to a clever origami-style recycled cardboard box developed with a Yorkshire manufacturer.

A successful gin refill scheme has seen gin lovers visit the distillery to reuse their bottles. 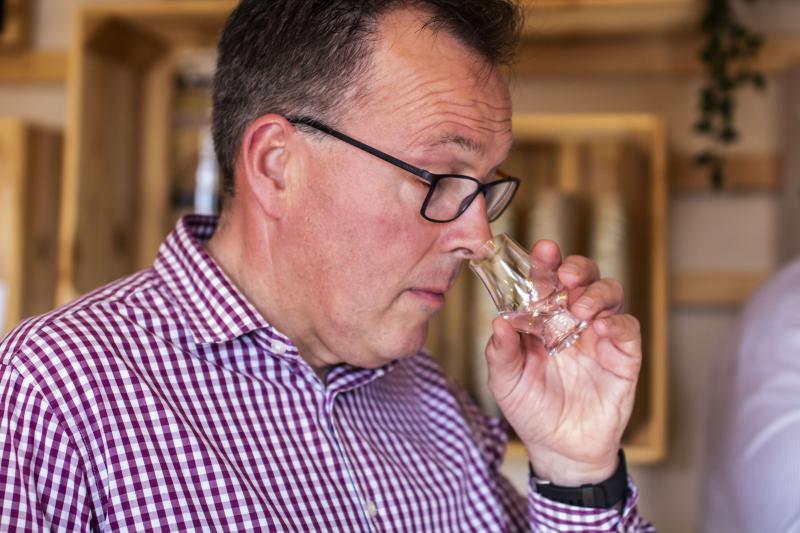