The CEO Of Yorkshire 2019, Andy Hindley, Has Been Talking To The Yorkshire Times About The Preparations That Took Place Before The Start Of The World Cycling Championships. 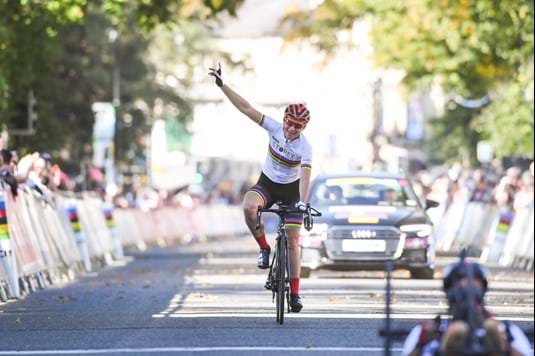 The worldwide interest in the UCI means when I walk in to the Yorkshire Hotel to meet Andy Hindley, the man behind ensuring everything is a success and delivered on time, there is a queue of journalists wanting to interview him.

Nine days to showcase Harrogate and its environs off to the world. “It’s amazing” he tells me.

I don’t think I quite realised how much has gone on behind the scenes. The planning started in 2016 when the bid was put to the UCI and Harrogate subsequently won the right to host the world championships.

“We have had phenomenal support from local authorities. We have been working with and coordinating 10 local authorities. There was 10000 Km of road that had to be surveyed, checked and if necessary repaired. That’s the tarmac we use and the race track and, it is a public road.

“It doesn’t stop there either. We have worked with 4 police forces, the NHS, the ambulance service, power suppliers - gas and electric - plus water and let’s not forget the railways, highways and Ministry of Defence; all these have to be coordinated and everyone has been so supportive.

“We have had to put up 27km of barrier around the racecourse and in addition mobilise a lot of people in fact 1000 volunteers including hundreds and hundreds of security personnel."

Harrogate is the right size and has the infrastructure with the Stray forming the centrepiece.

Andy Hindley recognises that there will be some disruption but the economic impact over the nine days with the millions of spectators expected and the hundreds of competitors from all over the world, already in town acclimatizing, means it can only be good for Harrogate.

There are 90 countries participating 1400 athletes, the numbers stack up. “People don’t come and spend tuppenny-ha’penny. You have to get here, stay here, eat, entertain yourself do shopping and the value is not just now. That legacy can’t be measured.

"Our job is to deliver it. By the time we have packed up and moved on to something else.. the legacy hasn’t even started to kick in looking at a year two years or 4 years down the line and start seeing the uplift we expect… that is when

“The global reach and impact is impressive. This is, after all, the world championships. “The numbers of spectators will be weather dependent… but we have seen with the Tour de Yorkshire this year, when it snowed in Bridlington, people still lined the streets. Yorkshire likes a bike race and lots of people come out to see it which is superb .

“Interestingly, we run surveys on our website. There are simple questions such as: are you coming and where are you from? 12 – 15 % are external to the UK, so we have a lot of international visitors. Only 38% were from Yorkshire. So you start adding the Yorkshire and the International groups together it means there is something around 50% of visitors from outside Yorkshire but UK based. Therefore, the exposure for homegrown tourism is phenomenal. It is huge.

What this all adds up to, Andy Hindley is keen to point out, is maybe people have been to Yorkshire before maybe they haven’t but the reach with the media: radio and television with the BBC being free to air means a superb reach.
“A 250m global audience and then think of the social media impact.”

Also by Andrew Palmer...
“This Is A Time To Be Bold”: BCC Sets Out Principles For Safe Restart Of UK EconomyUK Economy Not Expected To Return To Its Late 2019 Size Until 2023, Says EY Item Club ForecastVirgin Money Covers Its Not-for-profit Fundraising Platform’s 2% ‘Platform Fee’ Until The End Of Lockdown10 in 10 Chris Oldroyd MD Inprotec10 In 10 – Chris Jones, SpeedQuizzing
“Yorkshire is already on the cycling map as well as the global tourist map. We are not trying to pretend we are putting it on the map it is already there. What we are doing is lifting it up a notch taking it to the next level.

"The legacy is to build on all of this. Yorkshire is already bucking the national trend in terms of visitor numbers. The team at Welcome to Yorkshire, one of our delivery partners, can build on future events and that doesn’t necessarily have to be in cycling… or sport. It gives you the impetus to say look this what happens when you do this sort of thing it is about profile and awareness.

Andy is excited about the para cycling starting in Beverley. 15 nations are being represented. 26 races in the day 13 for men and 13 for women, which he says will be amazing.

For Andy though, it has been 2 years getting ready.

"I want it to happen… see it through as a success and for everyone to have a good time... be inclusive and inspiring. I want people to enjoy it.”