The Edge Of Time - A Memoir By Kaye McGann 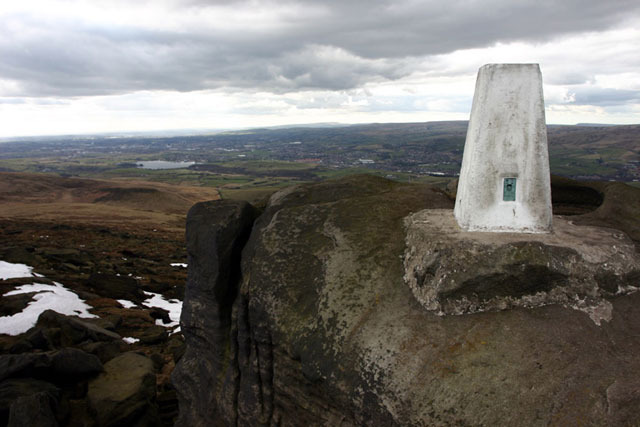 The buildings huddle under the brooding moorland, dark millstone grit squared against the weather. The wind sweeps down from Blackstone Edge, swirling and biting. Rain comes from low-hanging mist, battering the streets and brave houses. It was a place of Roman fortification, a defence against the Brigantes. One cannot imagine a greater contrast than this place and the bright sunlight of Rome.

It is always wet and windy. For months at a time the snow piles deeper and deeper, so that traffic moves with difficulty. The roads to Yorkshire close down. The railway shuts, too, and silence descends.

As summer arrives, and the sun shines, one can smell the peat bogs drying out. The air becomes clear, brilliant, harsh light on gaunt rocks. The reservoirs and tarns ringing the village sparkle invitingly, though the constant wind blows a pattern of ripples across them, and the clouds are reflected in the shifting light over the depths. The waters may look inviting, but they are deathly cold.

I lived for many years up in the hills, where the road ended, and the moors began. My home was low and squat, with heavy stone blocks instead of slates, built to withstand the winter storms. I looked out at curlews flying high, and dark clouds scudding. I planted sycamore and beech for a windbreak. In summer I had a sun-trap by my back door, and there we would sit, eating well, always a bottle of wine, for all the world as though we were Romans, and not the Brigantes left behind when their conquerors withdrew.

He owned the cottage across the field from us. He was small and spare and ill-fed. He always looked sixty. His sparse grey hair stood up above his surprised face. A grey muffler knotted round his neck, he shuffled in carpet slippers, winter and summer, indoors and out. His fat wife and strange daughter were linked in unholy alliance against him, so that he liked to escape to the field, and sit smoking his pipe by his hen-cote, whilst his ducks ambled round him, and my dog Sally kept him company.

When he was offered money for the field, he took it, and sold his ramshackle cottage and moved with his wife and daughter to a house down in the village, a house with a bathroom, an inside lavatory, and a fitted kitchen. But there was no land attached, there were no poultry, there was nowhere to go to get away from his wife and daughter. And two months later, he was dead.

Across the road, where the bus turns round, is the pub. This inn has stood for nearly three-hundred years, at the point where pack-horse trails intersect. Some of its beams are real, some highly suspect. A ‘living flame’ gas fire sits in the grate, which used to burn logs. A dining room has replaced the taproom. The landlord smiles and smiles, and his daughter has a pony.

Outside on the cobbles the Morris dancers do their clog-dancing twice a year. Every summer the rushcart sets off on its journey down to the village at the start of the Rushbearing Festival. As the year goes on, the pink-coated huntsmen assemble for their drag hunt. And the landlord rubs his hands and chuckles to himself.

Then winter comes, and the road closes down, impassable in the snow. No-one in their right mind ventures beyond here onto the moors. The sheep wander down, seeking food. The locals from the hamlet fight their way through the drifts to sit together round the fire, and if one closes one’s eyes, it could be any winter from the past three-hundred years. If one opens them, one could be forgiven for seeing everyone as a throwback, a Brigante. We are all short, squat, and dark, little Celts, tough and assertive, still here despite time and change. We are like the rocks.

It is as far to the Lake from the village as it is from the village to our hamlet. A bus used to trundle from here to there and back. The Lake is a gathering point for miles around. It used to be known as the Weighvers’ Seaport, because the millworkers, the weavers, came here from their cotton towns.

A road circles half of it, but the rest has to be done on foot. It is over three miles round.

Little yachts tack about, and rowing boats try to avoid them. Ducks crowd against the shore, where children on the little beach throw them bread. There are cafes, pubs, and restaurants, gift shops and craft shops, parking for the disabled, and a travelling fair every Easter.

At the other side of the lake, the moorhens nest in the quiet reeds, and the moors rise up, sombre and forbidding, with Rakewood viaduct striding gigantically between its spurs, slender and imposing and majestic. The faint roar of the motorway traffic wafts down the steep valley it transverses, across the cold, cold, waters of the Lake, to the people on the bank, disporting in their little day.

The busy road, the nightmare road, goes to Rochdale. It is crowded, ugly, an eyesore, an affront to our village.

The road by the Lake leads out over a wild waste land towards the motorway, and so to cities and the sea.

There are two roads into Yorkshire. One, the one the Romans favoured on their way to York, takes the high ground, climbing, climbing, up the escarpment of Blackstone Edge, until, turning, one sees the Lancashire plain spread below, a panorama of decayed industry on a once-lovely land. The other road goes more gently, over the Summit Pass, through the moraine-scarred gorge of Walsden valley, the canal and railway line keeping it company.

Then there are the packhorse trails over the moors, still used by Travellers in their brightly-coloured wagons as they make their way northward to the Horse Fair.
The most difficult way out, though, is the one I have travelled, to loosen the ties that have bound me, to break the chains of belonging, to see the ugliness and narrowness as well as the beauty, and to take another road in life. But still I know that the curlews are circling and calling, the ling scents the moorland, and the little Brigantes’ lives go on. The wind still blows over the tarns. The pattern of the ripples remains the same. I was less than a drop of water in this place, and now I have gone. I dream of it still.

This memoir was written by Kaye McGann.