The Fat Cat At Kelham Island. Where History Was Made

So here I am standing reverentially before the famous Fat Cat in the wonderfully revived industrial area of Sheffield, Kelham Island. It’s a couple of years since I was here last but it hasn’t changed and the impact is still exhilarating, still sublime. No similarly unprepossessing building in the world could have this effect on the beer lover. 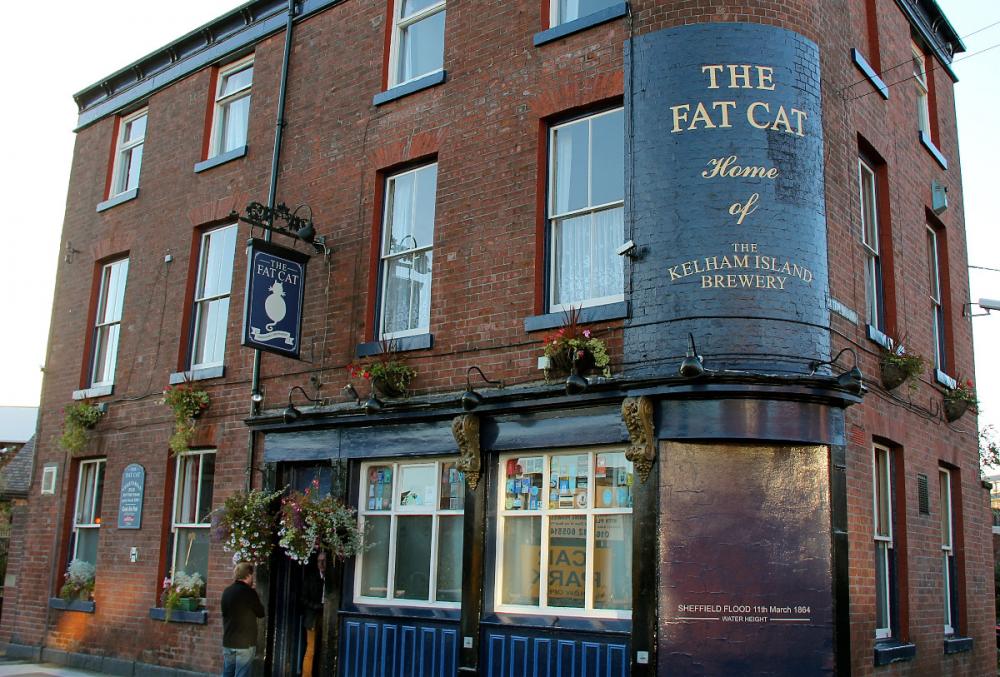 It’s a hot day and I order without hesitation or thought a pint of their flagship Pale Rider, a CAMRA Supreme Champion Beer of Britain award winner. A nice strength at just over 5 per cent ABV, it has a distinctly refreshing taste of citrus and fruity hops. The medium-carbonation is right for a hot day. The medium off-white head had practically gone before I find a seat in a tight corner. I’m pleased to learn that Prince Charles has been known to request a pint of it when he’s in these parts and the heir to the throne instantly goes up in my estimation.

This is my kind of a pub and you might say it’s where it all started back in the 1990s at a time that the idea of a brewing revolution was in the air, germinated by CAMRA, and beer drinkers were increasingly revolting against the keg stuff that the big brewing chains tried to pass off as real ale.

Outwardly a small brick-built pub dating from the mid-1850s but surprisingly roomy inside, it was originally called ‘The Alma’. Put up for auction in 1981, it was purchased by Dave Wickett and Bruce Bentley who opened it under the new name on 21st August, 1981, a historic date, if you like. Their declared aim was to provide an alternative to the pubs owned by the big breweries.


Also by Andrew Liddle...
The Lonely Chapatti’s Food For ThoughtThe Nomadic Life At ChristmasTerriers Get The Magic Rock For ChristmasLaughter In The Dark In Leeds - From The Devil’s JukeboxFalsgrave Park, The Town Crier And An Upturned Santa
Originally, they bought in outstanding ales from all parts of the country but in 1990 founded Kelham Island Brewery to produce their own, siting the building in the beer garden. The first brew was in September, another historic date, making them the first new independent brewery in Sheffield in almost 100 years.

Equipment purchased from the recently closed Oxford Brewery facilitated a full mash brewing of around 10 brewers’ barrels a week. In order to cope with demand, a purpose-built brewery was eventually constructed a short distance along the road, the original brewhouse becoming the visitors’ centre. In March 1999, the new brewery opened with a capacity increased to 50 brewers’ barrels.

It’s hardly a coincidence that since their establishment, all four of Sheffield’s large breweries have closed: Whitbread went in 1993, Hope & Anchor shut its door in 1994 and Stones Brewery and Wards Brewery both closed in 1999. By 2008 and with real ale taking off on a grand scale, Kelham Island Brewery was again updated doubling in size, giving it a capacity of a 100 brewers’ barrels.

I am speaking to Dave’s son, Ed, who took over in 2012. He waves away my tributes and says modestly: ‘Look, we’re extremely proud of our roots and our reputation but we realise we have no divine right to continued success. We work very hard to make sure every beer we produce is up to the highest standard – and to keep up with trends which are ever changing.’

An example of innovation is the craft lager which they are currently working on, always looking to cater for the broadest range of tastes by increasing their core range which at present includes Easy Rider, Kelham Best, Pride Of Sheffield and Riders On The Storm. ‘Tom Arnold, our Head Brewer, is always trying to put into practice ideas that I come up with and which we eventually concoct between ourselves.’

I ask about his father and he tells me he was not just a pioneer for brewing and for Kelham Island but a great boon to the industry in general. ‘He was an entrepreneur with a tremendous drive behind him. If he wanted to do something, he’d do it.’

Driven men can sometimes be a little hard to keep up with, I prompt. ‘Yes, he could be slightly aggressive, I suppose, but he was fair and generous and he would do anything for anybody.’ He smiles. ‘But I was on the end of a good few tongue lashings, I can tell you, if I didn’t come up to scratch.’

Does he take after his father? ‘In some ways yes, but he was a massive academic, a great student of economics.’ He gives it some thought. ‘I’m not like that. I’m more practical. I have to get involved, hands-on.’

Back to the Pale Rider, itself. It’s one of the finest pale ales you’ll ever come by, an aesthetically appealing pale golden amber, exuding its own pleasant distinctive aroma of malted caramel and fruity hops. The notes on the palate are at once delicate and fruity but crisp and zesty. A strong hint of hops gradually introduces itself subtly to give a flavour which is full and bitter-sweet and far more pleasingly complex than the majority of pale ales.

It’s truly a legend, sold and enjoyed all over the world but it won’t taste better than here in this tiny pub, at Kelham island, consumed in the company of the son of the great man who delivered a mortal blow to the big chains, put the Whitbread tankards and Watney red barrels in their place – anywhere but here!