The First Men In The Moon By H.G. Wells: An Audacious Literary Experiment 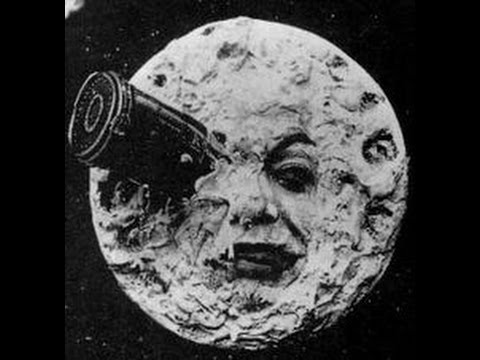 Whilst the lunar surface of H.G. Wells’s The First Men In The Moon (1901) is a fascinating source of riveting adventure and flights of oneiric fancy, as the novel’s protagonists Mr Bedford and Mr Cavor discover, the unexplored satellite hides its most thrilling secrets deep within its subterranean realms. The same may be said of the novel itself. The teleological functional specialisation of the highly orchestrated, hive-like alien society of the Selenites is as nothing when compared to the literary cosmos of tools Wells employed to tell his “fantastic story”. Stung by intellectually barbed criticism from literary critics and fellow authors alike, Wells set out on his fictional lunar voyage to demonstrate his technical virtuosity and, as importantly to him, to create a literary strategy capable of mass communication. This under-appreciated marvel is, for my money, an intriguing literary BOGOF: the reader receives a fabulously engrossing novel, and the opportunity to reflect upon a literary experiment every bit as audacious as the flight undertaken by Messrs Bedford and Cavor!

H.G. Wells (1866-1946) responded to the disquieting mood of the fin de siècle by exercising his prodigiously fecund imagination, talent for literary innovation and scientific erudition. He added considerable impetus to the development of scientific romance as a didactic and popular literary genre. During a six year stretch from 1895-1901, he produced a stream of his “fantastic stories” beginning with The Time Machine (1895) and ending with The First Men In the Moon (FMM). Cultural historian John Higgs describes this provocative and pioneering period of authorial innovation as a “dazzling display of new thought”.

FMM was his last crack at this avant-garde genre, before turning his attention to other literary strategies and is a transitional marker, the literary equivalent of a dendrochronological ring in his authorial career and canon. As such, Wells cannibalised the prevailing literary genres of his time as well as those of the past and re-purposed them in a spectacularly original effort to fly the scientific romance genre all the way to the moon and back.

Before we alight on the lunar surface and explore its dazzling caverns, I propose that we orbit it first. Grab a little perspective, before touchdown.

Wells tells us that Cavor took the works of the Bard on his travels, so let’s reference him. Brian Aldiss (1925-2017), described H.G. as “the Shakespeare of science fiction”. For me, FMM goes a long way towards making Wells worthy of this undoubted panegyric. I doubt that G.K. Chesterton, Henry James or the science fiction purist, Jules Verne would agree. Indeed, Hugh Walpole said in 1915 that, “Wells had sold his soul for a pot of message”, a pun on the Biblical story of Esau. Despite, or perhaps because of his success, Wells was pilloried by notable members of the literary intelligentsia of his epoch for showing scant regard for the romance genre and the works of the Pre-Raphaelites. William Morris, heavily influenced by Ruskin, together with other luminaries of the High Victorian period, were to be unequivocally venerated, yet Wells had his own ideas. 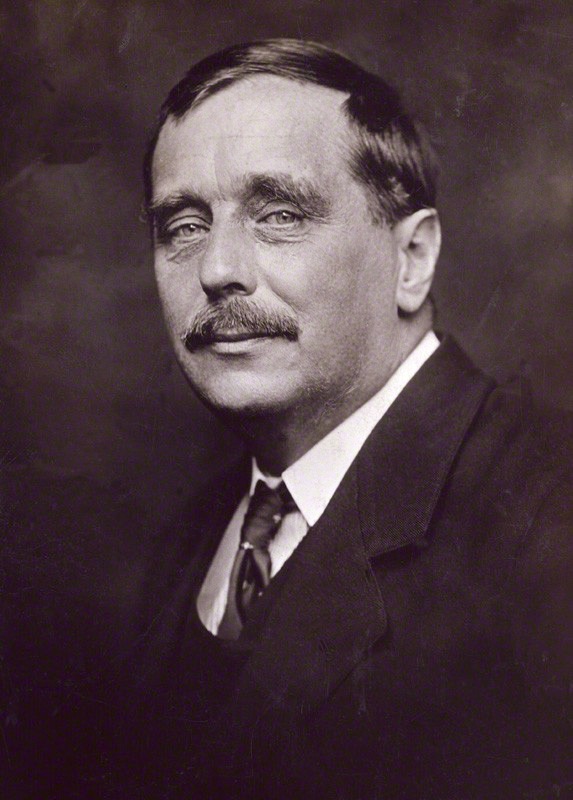 H.G. Wells
The use of scientific romance by Wells irked many of his contemporaries, as did his publicly stated aversion to a prevailing desire amongst some, to withdraw from everyday reality in pursuit of medieval nostalgia, fine writing and belles-lettres. His on-off friendship with Henry James, evinced a sceptical disregard for the realist genre, or at least the sort of novel written by, “an hippopotamus trying to pick up a pea in the corner of his cage”. His aversion to aestheticism and anachronistic literary genres, was all part of his struggle to find a means of reaching the newly educated and therefore literate bourgeoisie at the beginning of a new century.

Wells, conscious of the power of physical science to transform life either for the worse or for the better, had chosen to utilise a literary strategy directly employing, if not scientific fact much to the chagrin of Jules Verne, then the lexicon of empirical science and a bucket load of imagination. He directed romance fiction not at the past, but at the future, and his critics, if not apoplectic in scorn, were dismayed. Echoing Robert Greene’s comment on Shakespeare, this “upstart crow” had ruffled the feathers of the literary establishment. Well done Wells! Christopher Caudwell (1907-37), the British Marxist writer summed up this hostility some time later, by casting Wells as an intellectual poised between high-brow culture, but ill-equipped to reach its summit, and a proletarian culture that he both feared and yearned to communicate with.

Against this backdrop, Wells produced FMM and bowled a literary googly at his detractors, whilst also sincerely attempting to inventively reach his audience via literature’s most revered genres. For me, it was his last serious attempt to silence his critics and prove his literary prowess in terms they would respect. Wells could however be charged with simply trying to find or refine his bestseller formula, a point L. Edward Purcell levels at George du Maurier’s , Trilby (1894) in his book The Beginning of the Best Seller System (1977). Unsurprisingly, you won’t find me agreeing with that view of Wells. He may have been prone to popularism, but he was not a Dennis Wheatley, Dan Brown or Jeffrey Archer. Wells’s literary experiment with FMM was a genuine response to the pressing issue of the novel’s form and purpose in his time.

So, we’ve orbited the moon. Cavorite has done its job and now we’ve landed. Let’s have a look at this literary substructure that I’m claiming echoes the ruthlessly utilitarian, but indubitably efficient societal structure of the Selenites. I’ve made an audaciously bold fiat and it’s time to support it!

Opening me to the charge of joining Bedford and Cavor in their hallucinogenic feasting on lunar fruits, it’s possible to see FMM as having the structure of a play - the first genre Wells deploys. Bedford is a failed businessman who thinks his powers extend to, “producing a perfectly good play”. Bedford casts Cavor as his central character and even directs or edits his contribution. The novel perhaps has a Prologue on Earth and three Moon-based acts. I accept that the mushrooms might be talking.

The novel also utilises no less than four styles of fiction to convey its meaning. Satire describes the contrast between Bedford and Cavor; between the bourgeois utilitarian use of scientific discovery and Cavor’s naïve use of it for pure exploration. Popularisation may be seen in the vulgarising of natural science, as is suggested in the description of the lunar surface and Cavorite as a material. Similarly, Sociology is touched upon in the description of the Selenite community. Adventure is incorporated in the lunar episodes involving fights against the Selenites and follows models offered by Romance novels in colonial settings. Finally, oneiric fantasy gets folded into the literary dough in the form of descriptions of the underworld and indeed of the lunar surface itself.


First US Edition
The novel conforms to a Romance formula, in that it is set in a distant context with heroes and has a quasi-medieval feel. Bedford and Cavor put me in mind of Don Quixote, and Sancho and the quixotic motif is echoed in the very substance that purports to enable their knightly adventure, Cavorite. That’s Jules Verne silenced!

This really is turning back to the medieval romance and re-purposing it. Perhaps my most compellingly supportive evidence comes in the form of looking for other genres being specifically applied to individual chapters within the novel.
The first four chapters may be read as a comedy of manners which are satirical and didactic. The next chapter is purely didactic with its description of the journey from the Earth to the Moon. The next three chapters are in the form of an exotic adventure novel; a Stevensonian description of the landing and exploitation of the surface. We move on to another didactic episode with the introduction of Gothic literary elements. This genre takes centre stage for the next five chapters and even moves into gothic horror territory, as we see our heroes imprisoned and facilitating their murderous escape both brutally and with apparent verve. Bedford’s speculative and philosophical reflections in the next chapter are not there to drive the plot, but to expostulate upon the novel’s deeper meaning. Next we move back to a comedy of manners strategy as Bedford returns to England.


Also by Paul Spalding-Mulcock...
‘Why Endure My Own Dehumanization?’: Assembly By Natasha Brown'Hurt People, Hurt People...': An Ordinary Wonder By Buki PapillonAmericana Meets Aesopica : Fox 8 By George SaundersGothic MusingsInterview With Victoria Princewill
The final four chapters employ the forms of a utopian novel and re-introduce the idea of the structure being a theatrical drama, with Mr Bedford editing Cavor’s messages from the moon. He’s an unreliable narrator and ultimately shifts to become one of the novel’s motifs. Wells has given us a recapitulation of various literary strategies, each functioning within the overarching literary strategy of a scientific romance.

Perhaps Cavor’s failed attempts to continue his Defoe-esque journalistic communication from the moon, might be seen as Wells’s continuing desire to be a literary bellwether. His extraordinary literary experiment is perhaps not up to the task of reaching his audience, nor the best means of addressing the dangers of scientific progress colliding with naïve, error-prone humanity.

He’d been to the Moon, but his literary strategy would have to change, if he was to further explore the Cosmos. Fortunately for us, Wells had a brain nearly as big the Grand Selenite and unfortunately for him, in later life it perhaps even came to resemble him! It might have been his last proper scientific romance, but I think FMM is a fantastic pinnacle and a marvellously interesting punctuation point.