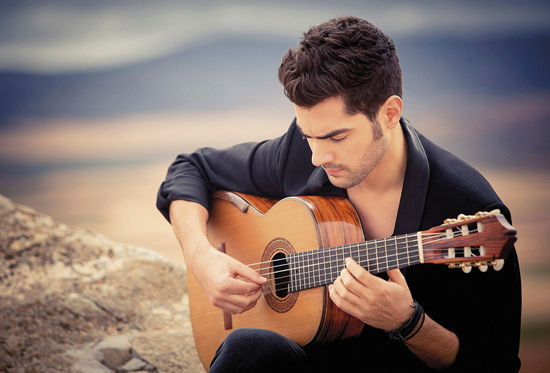 Rossini’s sparkling overture to his opera The Barber of Seville kicked off the evening, with the Flanders Symphony Orchestra doing full justice to Rossini's exciting score.

Joaquin Rodrigo's Concierto de Aranjuez for guitar and orchestra is one of the most popular concertos ever written, and one of classical music's iconic pieces. A blend of classical elegance, flamenco passion and the catchy rhythms of Iberian folk, it is the ultimate crowd-pleaser.


Spanish conductor José Luis Gomez
The same can also be said of the soloist Miloš - it is a truth universally acknowledged that when you become known by your first name in any field, you have 'arrived' - and he did not disappoint.

The famous Adagio was a beautifully refined, touching cantabile which resisted the urge to be overly sentimental, and featured a fabulous cor anglais solo.

The third movement saw some lovely moments as playful imitative motifs were passed seamlessly between the soloist and orchestra. Although the orchestra supported the soloist sensitively there were occasional problems of balance between soloist and orchestra, making it difficult to hear the guitar's quieter semiquaver passages, despite the use of a microphone.

Two Preludes for solo guitar, by Brazilian composer Villa-Lobos, opened the second half and continued the theme of the evening, combining elements of Western classical music with indigenous melody and rhythm.

Prelude No.1 in E minor is one of the best-loved pieces from the guitar repertoire and one that Miloš has performed for many years.

Clearly in his element, he went on to establish a real connection with his audience, and demonstrated the technical and musical possibilities of the guitar, showcasing its palette of colour and sheer power. Prelude No.4 in E minor was simply magical, and had the audience hanging on to his every note.


Also by Elaine Annable...
Street Scene: Charismatic But ClunkyFeline Groovy?Review: Milana Sarukhanyan, Soprano, Ben Finlay, CelloStrictly Come DancingA Sign Of The Times: Vegan Cafe And Eco Store In One
Isaias Savio's 'Batacada' - a Brazilian dance which is part of the Samba genre - provided a wonderful contrast of style and texture to bring his solo spot to a close.

I must confess that prior to this concert the Flanders Symphony Orchestra was not on my orchestral radar, however, after its invigorating performance of the final two works on the programme - De Falla's El Amor Brujo Ballet Suite, and Bizet's Carmen Suite - I can highly recommend it.

The next concert in the series is on Saturday 9th of November when Prague Symphony Orchestra will be performing Smetana's Bartered Bride Overture, Martinu's Cello Concerto No.1 and Dvorak's New World Symphony.