The Haworth Home Guard Is Gearing Up For Action

They are usually called into action seven times a year at 1940s’ events in Haworth, Pickering, Pateley Bridge, Grassington and Bolton Abbey - and at Eden Camp, Brighouse’s Yorkshire Wartime Experience and the Tram Museum in Crich, Derbyshire. “They are all great occasions and we always try to pull out all the stops wherever we are,” Lance-Corporal Rob Stimpson tells me. “They are tremendous fun for one and all.” 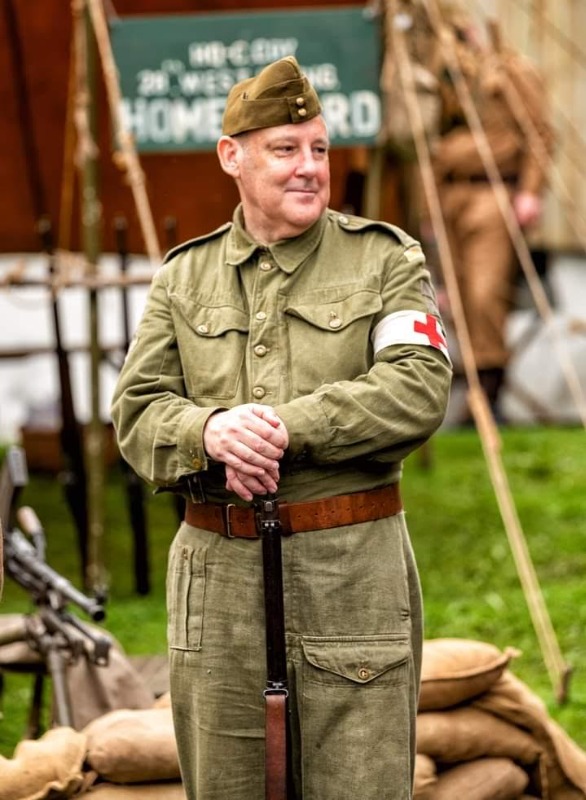 Lance-corporal Rob Stimpson
Once again it will soon be time to step back into a bygone era with the annual bunting-strewn 1940s’ celebrations. Old buses and military jeeps will line the way, and Matchless motorbikes and gleaming Austin 7s will invite admiration. The biggest crowds build up and anticipation hangs in the air when WR28, the Haworth-based, 20-strong platoon, march in and come to attention, fully kitted out, about to put on their show – complete with regimented drills, exploding bombs and a few thrilling pyrotechnics.

Among their audience children stand bright-eyed, elegantly-coiffured ladies look particularly lovely fully-fashioned in 1940s’ hats and dresses, some of the menfolk more soberly attired in pinstripe suits, sports jackets and flannels, a few sporting boaters. A couple of Winston Churchills will be in the throng, in the midst of conversation and cigar smoke. An American general is usually found, burger in hand. A group of landgirls are likely fixing their trademark headscarves.

Don’t mention Private Pike, the only surviving member of the Walmington-on-Sea platoon from the television series of fond memory. “He’s not here,” Rob will bark in mock indignation “We have no connection with Dad’s Army. We are a group of highly-trained men, dedicated to defending the country if needed.”

What binds us all together is that we are all very patriotic and want to use the current nostalgia industry to show the reality that this branch of our defence was full trained, well equipped and ready to fight.
“We practise about twice a month in the drill hall in Keighley,” Rob tells me, in serious tones. “We do the same rifle and marching drills the originals did.” One of their tasks is to pose happily for photographs for a small donation for charity. “We are paying homage to all those dedicated men and boys who served in the Home Guard,” he adds, “as well as keeping alive the service and sacrifice of the Second World War generation.”

It somehow seems more fitting with every passing year that such occasions continue to evoke the spirit of the 1940s and serve as testament to the nation’s resilience and spirit in the darkest hours. Fittingly, their unofficial motto displayed on their website is found in Churchill’s famous phrase: ‘A nation that forgets its past has no future.’

“Don’t get me wrong,” Rob says, “I love the Dad’s Army programmes and we were overjoyed to appear as extras in the 2015 film.” He takes out and proudly flourishes a picture of himself standing next to a smiling Bill Nighy, one of the film’s biggest stars. “But it’s not about fancy dress, fun and games - and we can’t get involved in public with anything that doesn’t take it seriously, even if we have a bit of banter in private.”
His father was a tank driver, one of Montgomery’s Desert Rats, who served in Egypt and the North African campaign. Like many of his generation, Rob was always avid for details of the five-year conflict but it was not until by chance he found himself in Pickering some ten years years ago when a Forties’ Weekend was in full swing that he became aware of the continuing work of the ‘Home Guard’. He knew immediately he must join.

Based at the time in Wakefield, he found his nearest platoon in Haworth and was welcomed into its ranks as a Private once he had acquired the uniform and attendant equipment, mostly on E-Bay. “It was quite cheap back then but these days it would set you back a grand or more. The rifle alone would cost about six hundred.” His prize possession is a typical example of one of the P14s originally used in the trenches in WW1 but pressed into service by the Home Guard. It has been decommissioned but will fire blanks to add to the drama of the show. Replicas are available much more cheaply but the aim is to be as authentic as possible.

The platoon has one youngster in his twenties but mostly it’s made up of men of retirement age or approaching it, their backgrounds as widely diverse as those of the Walmington-on-Sea troop. “What binds us all together is that we are all very patriotic and want to use the current nostalgia industry to show the reality that this branch of our defence was full trained, well equipped and ready to fight.”

It may to many young people simply appear to be just the fun of the fair with added pomp and pageantry, buns and bunting, costumes and Khaki. But long may they continue - these glorious celebrations of the way the wartime generation came through five years of hell – to bring home to modern people something of the reality.

And long may we remember England’s last line of defence, the million and a half dedicated members of the Home Guard (originally called Local Defence Volunteers or LDV), men and boys aged from 17 to 65 years, that stood ready to defend the country.

Don’t mention Pike!
Also by Andrew Liddle...
Three Billboards Outside Tin Brook, StockportDoors Opening For The Georgian Theatre RoyalAnd Then There Were TwoMeet Magic Rock's Christa SandquistSunak Is A Bit Of A Drag