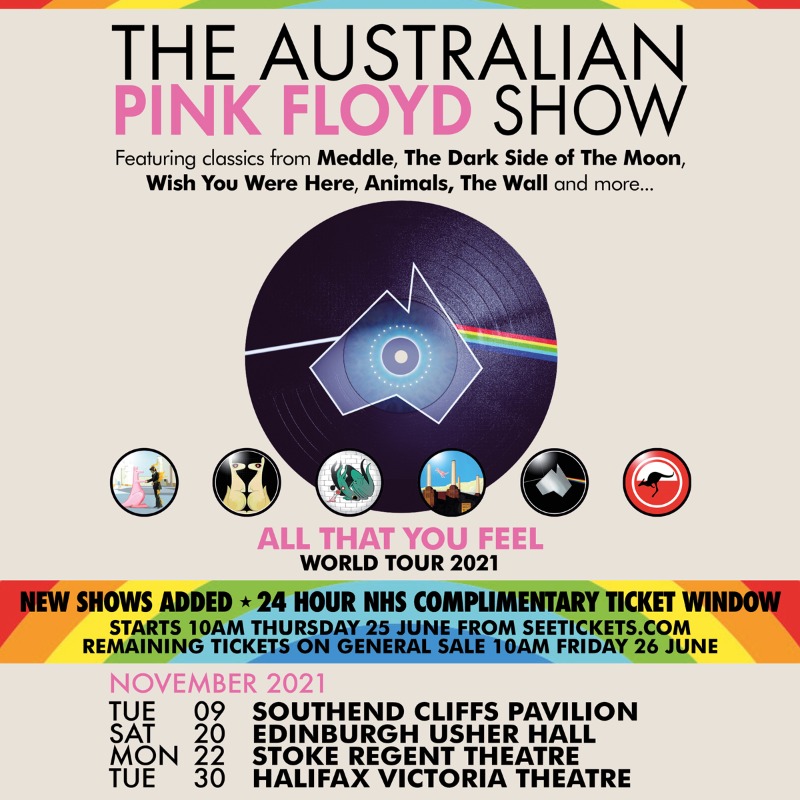 The 'Australian Pink Floyd Show' will be returning to the Victoria Theatre Halifax on Tuesday 30 November 2021. The Halifax date will be one of 4 new shows where a number of tickets will be made available for FREE for NHS workers for a 24 hour period (details below).

Selling 3.5 million tickets worldwide and described by The Times as “The Gold Standard” and The Daily Mirror as “The Kings of the Genre”, The Australian Pink Floyd Show gave its first ever concert in Adelaide, Australia in 1988. Since then, they have performed in over 35 countries worldwide; played at David Gilmour’s 50th birthday celebration and were even joined on stage by Rick Wright. TAPFS is the leading and biggest show of its kind in the world.

Performing the music of Pink Floyd with note for note perfection, this critically acclaimed tribute show has been astonishing audiences worldwide. Striving to reproduce the Pink Floyd experience and bring the music to new audiences, the show continues to include a stunning light and laser show, video animations, state of the art high resolution LED screen technology and other special effects. To accompany these visuals are several large inflatables including a giant pig and their own distinct Pink Kangaroo.

“For the record TAPFS are a phenomenon to be witnessed live… It’s almost enough to make you forget you haven’t been watching Pink Floyd, but a surrogate band” - Prog


Tickets for this show are available from £31.25 online at: www.victoriatheatre.co.uk.

The on-sale date for the four new shows for the NHS pre-sale is 10am on Thursday 25th June (for 24 hours) and general on-sale for these shows is Friday 26th June at 10am.