The Prince Of Wales Discusses Fusion Energy At UKAEA 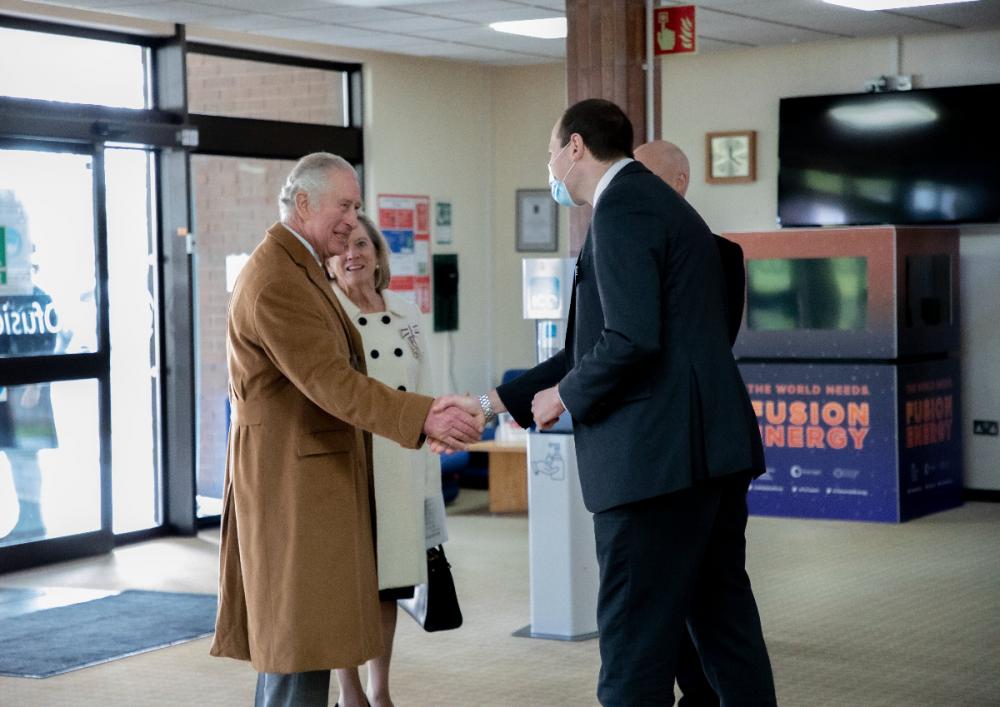 HRH The Prince of Wales meets UKAEA CEO Prof. Ian Chapman to discuss the benefits of fusion energy alongside The Lord-Lieutenant of Oxfordshire, Marjorie Glasgow
His Royal Highness visited the UK Atomic Energy Authority’s Joint European Torus (JET), the largest and most powerful operating tokamak machine in the world.

Her Majesty The Queen officially opened JET in 1984. Almost 40 years later, experts based at UKAEA’s Culham Science Centre, Oxford, discussed with The Prince of Wales how fusion promises to be an important part of the low-carbon energy mix in the second half of this century, at the same time presenting a significant economic opportunity for Britain.


Professor Ian Chapman, CEO of UKAEA, said:
“It was an honour to welcome His Royal Highness to our world-leading fusion energy research and development facility and showcase the ground-breaking JET machine.

“We agreed significant changes are needed to decarbonise the energy supply, and how fusion energy has huge potential to address that challenge. The Prince of Wales was very keen to understand more about how fusion can be a critical piece of the future global energy puzzle and Britain’s leadership position in overcoming the great scientific and engineering challenges set before us.”

Fusion, the process that powers the sun and stars, promises a near-limitless green electricity source for the long term but is one of the biggest scientific and engineering challenges of them all. The fusion reaction does not release carbon into the environment unlike the production of energy by burning coal, oil or gas.


The history of JET:

1975: Proposals for the JET machine were completed
1977: Culham in Oxfordshire was chosen as the host site for JET
1983: JET was turned on and achieved its first plasma before official opening by Her Majesty The Queen
1991: Performed the world’s first deuterium-tritium experiment – the fuel mix that will be used in the first commercial fusion power plants
1997: A world record 22.5 megajoules of fusion energy and 16 megawatts of fusion power achieved in the first dedicated deuterium-tritium run of experiments, proving large amounts of power can be produced from fusion
2021: Completes a second full-power run of experiments using deuterium and tritium
2022: 100,000th pulse completed, with new scientific results to be released in February

JET is currently the only tokamak – a machine which confines a plasma using magnetic fields – in the world running experiments using deuterium and tritium, isotopes of hydrogen. It has been key to the development of its successor ITER, the larger and more advanced version of JET and based in France, and one of the biggest collaborative science projects in history, involving 35 nations.

ITER, which is expected to come into operation in the mid-2020s, plans to operate under similar to those conditions used by JET and will continue working towards demonstrating the scientific and technological feasibility of fusion energy.

JET’s experiments are run by researchers from the EUROfusion consortium - 4,800 experts, students and staff from across Europe, co-funded by the European Commission.