Members of The Performance Ensemble in The Promise of a Garden at Leeds Playhouse. Photograph Zoe Martin
Ever enjoyed a performance but not quite sure why because you weren’t entirely sure what you’d just watched?

Well, I had such an experience last night at Leeds Playhouse when members of The Performance Ensemble took me on a gentle journey through the garden of life, and I was enthralled for two hours, listening intently to the wonderful, and very real stories, that slowly unfolded before me.

The cast were 50+ , the sense of on-stage community was all pervasive and their common link was either the tangible world of ‘the garden’ and all things green fingered, or the symbolism connected with 'The Promise of a Garden', the name of the production. 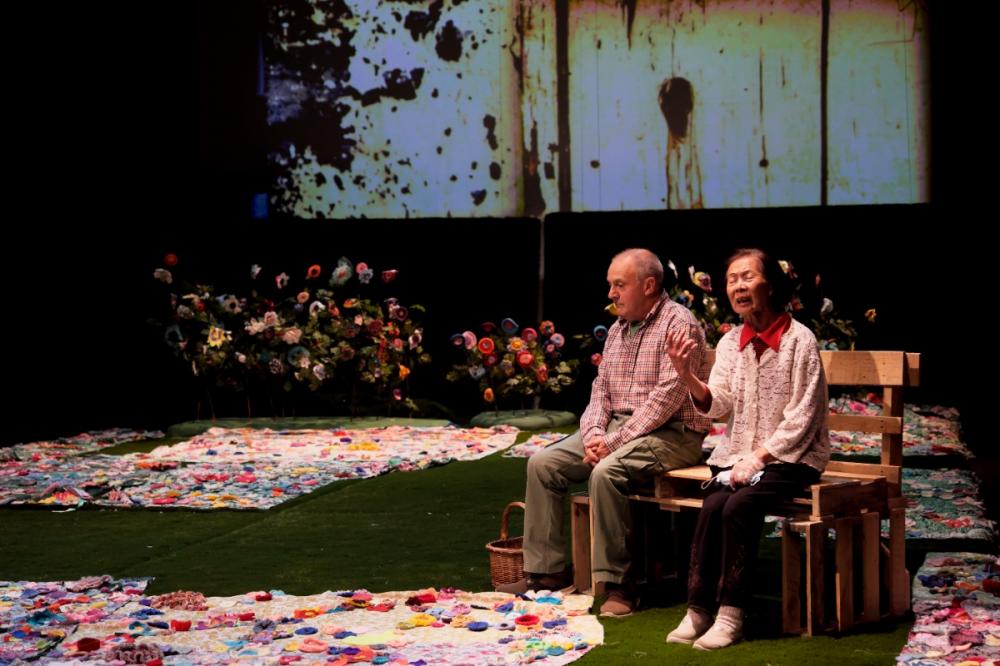 Colin Trenholme and Leung Ip in The Promise of a Garden. Photograph Zoe Martin
At one level it was quite literal: the lady who put a fresh vase of flowers in her garden every day as a way of remembering her beautiful 24-year old daughter, claimed prematurely by the ravages of cancer.

For the Caribbean lady it was a reference to her mum who left St Kitts as part of the Windrush Generation, and finished up buying her own piece of England: a home with a garden.

Initially I was a little confused. A group of people crossed the stage, clearly fleeing a country as they sought to cross a nameless border. It could have been Syria or even Afghanistan.
David Hamilton and Tamara McLorg in The Promise of a Garden. Photograph Zoe Martin
Then I realised that they were the generation that had gone before, the people who left their homeland for another life in Britain. The ‘performers’ were most likely their sons and daughters.

There was the Chinese man who couldn’t say no to his father, and the heart-breaking story from the elderly gent who fell in love only to be told by his wife that she had never loved him, she’d just wanted a good father for her kids.

And so the stories flowed each and every time, somehow linking back to the analogy of a garden whether it was watching plants grow during lockdown or using greenery as a way of surviving the madness of the last 18 months or, for that matter, life itself.

This was a gentle, beautiful, colourful and, occasionally hard hitting and sorrowful production. A performance full of honest anecdotes, shared from the heart. Verbalised ‘life’ at its best and well worth a look. You've only got tonight to see it!