The Pub is a micropub in Todmorden with its own micro-community. That’s probably the best way of describing the incredibly close-knit group who form the clientele of the small, neat, trim real ale place in Brook Street, just round the corner from the town hall. They all know each other and they will always make you welcome even if you are a stranger in town. 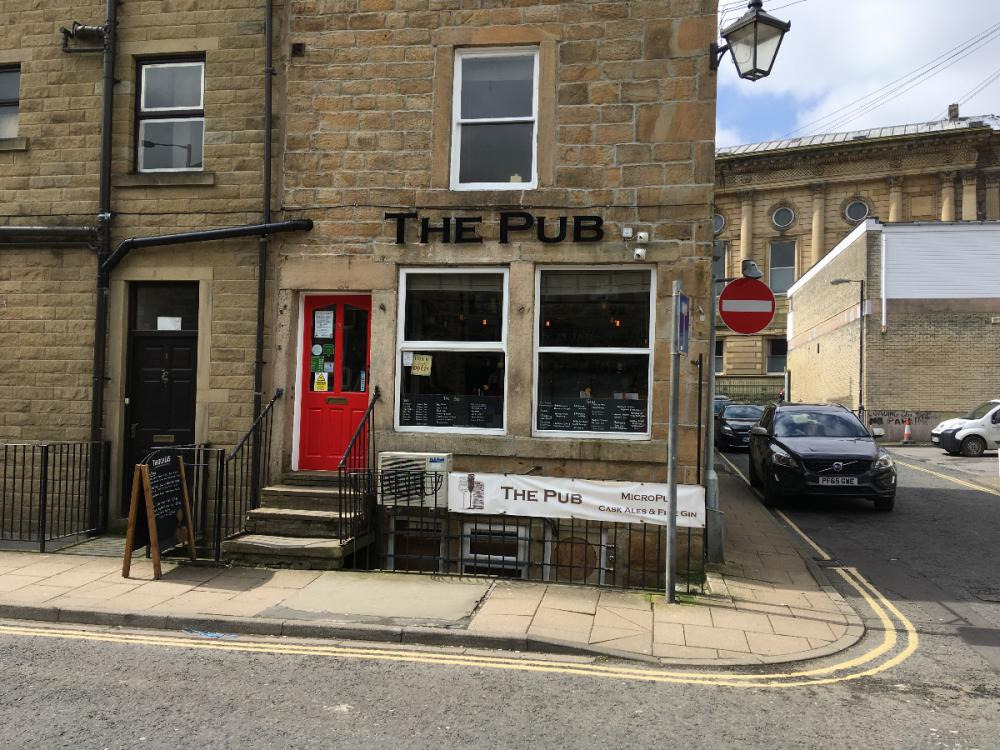 The obvious camaraderie comes in no small measure from the fact that it is small and well run by the genial landlady, the extremely popular Mel Kendall. When she opened at twelve yesterday it was like a homecoming for so many, who judging from their smiling faces were there out of sheer pleasure at the prospect of relaxing with friends and not because the Chancellor had exhorted them to get out and drink for England – the country’s economy needs you!

Opened on 4 June 2017, this was something like a third anniversary postponed by a month. Unlike the mass jubilation back then this was a sensible day. ‘We’ve got a sensible amount of people here, upstairs and outside,’ said Mel, smiling proudly, ‘all behaving themselves.’

‘It’s fabulous getting back, seeing everybody again, the people, the bar staff. It’s like coming back home,’ said Calvin, a regular in his late forties, while waiting for another pint of Brewsmith’s Mosaic light bitter.’ He winked at Mel and described her to me as an absolute legend. ‘It’s just fabulous to be here.’


Also by Andrew Liddle...
Treboom Wins GoldChantry Beers - The Pride And The PassionTheatre In The RowntreeAugust's Beer Of The Month - Rooster’s Craft Beer PerfectionMixed Reaction To Brewing Tax Reforms
Todmorden was surprisingly quiet for a Saturday afternoon and clearly there is still a degree of wariness among the population. ‘Lots of people think Covid might come back,’ said Calvin thoughtfully. ‘It’s not vanished. We’re still on a learning curve.’ He was going to stick around until teatime then go home and settle down for an early night. Sensible.

Ian, a sprightly 74, who lives just around the corner, tucking into a nice dark pint of Caramel Coffee Milk Stout, not exactly session ale at 5 per cent ABV, was keen to tell me he was a ‘light-weight drinker’. A much travelled native of Shrewsbury, he had found Tod the friendliest of towns since moving here and The Pub overwhelmingly the friendliest of watering holes. ‘Actually, I’ve got the closest friends here that I’ve ever had in my life. There’s about twenty of us who are very closely bonded. Fortunately we’ve all managed to stay in touch.’

What does he like most? ‘Everything,’ he says without hesitation. ‘We give strangers a warm welcome, everybody joins in the conversation, ladies can come in on their own and feel comfortable – and there’s no television or other distractions, the beer is kept immaculately.’ He, too, describes Mel in encomiastic terms. ‘What more can you ask for?’

It was billed nationally as ‘Super Saturday,’ the turning on of the taps after 15 dry weeks, the day the English regained their ‘independence’ - their inalienable right to go to the pub and sup a pint of draught. Even Prince William had played his part in the promotion, early doors, sipping an alfresco pint (of cider) and eating chips with his fingers.

Apparently, however, not everything went according to plan nationwide and CAMRA estimated that only fifty per cent of pubs had opened. According to the Sunday papers, there was a good deal of drunken behaviour and flouting of Covid restrictions in some parts of the country. What a surprise!

Happily the good people of Tod, from both sides of the Lancashire-Yorkshire border, either followed Boris Johnson’s instructions to be sensible or more likely didn’t need to be told. Those in The Pub were just having a good time among friends. Normal service had been resumed. ‘It’s a five-star place with a five-star landlady’ as Ian had put it.