Lapwing
Now that Easter is almost here and the weather is improving, many of us will be looking forward to getting out and enjoying the beauty of the nature around us. Even more so this year as people are choosing a staycation in one of the north of England’s National Parks or Areas of Outstanding Natural Beauty. You don’t have to travel far to see some extraordinary and beautiful wildlife.

Amanda Anderson, a director of the Moorland Association said:
“1st March to 31st July is the official breeding season for ground-nesting birds and our beautiful moors across the north of England are home to these and an array of other amazing species, many of which are in sharp decline elsewhere. The bird of prey population now exceeds 250,000 adult birds in the UK for the first time in decades, another hugely encouraging sign of our improving biodiversity.”

Here are some top tips for where to spot rare moorland species in England.


Peregrine chicks
Peregrine falcons have made a comeback in England in recent years. It is estimated that there are over 1,700 breeding pairs in the British Isles, up from just 360 pairs in the 1960s.

In 2020 peregrine falcons had their best year in a decade in moorland regions of the Peak District National Park. The Forest of Bowland also had a good number of peregrine falcon nests last year.

They are one of the UK’s most admired birds of prey for their aerial agility. They nest high up on rocky crags and quarry faces and are hard to spot. Peregrines drop into steep dives when they see a prey animal below, reaching speeds of over 200mph, making them the fastest animal in the world. 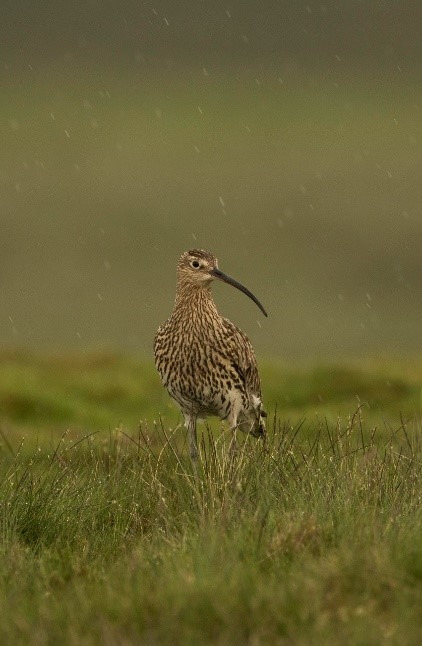 Curlew
More than a quarter of the world’s breeding pairs of curlew – around 16,000 – are found in the UK and are a major feature of the majority of grouse moor estates in England and easy to spot at this time of year.

The Bolton Castle Estate in Wensleydale has been awarded the prestigious Bellamy Award from the NGO Educational Trust for its curlew conservation efforts and works with the British Trust for Ornithology to monitor nests. Estate staff have counted up to 1,000 over-wintering birds on occasion.

The estate hosts a curlew festival every two years and can arrange guided tours for visitors, by arrangement.

Curlews are site-faithful so will usually return to the same moorland location that they were born to breed their own young, year after year. They are obvious to identify with their slender long downturned bill and wonderful to hear the atmospheric ‘bubbling’ sound of their call.

These are ground-nesting birds so it is recommended to stay on recognised footpaths in the breeding season and keep dogs on a short lead or under close control.


Hen harrier
Hen harriers, although still rare in England, are now seen on 50 per cent of moorland estates across the north of England from the Forest of Bowland in the west to the North York Moors in the east, from the Peak District in the south to the North Pennines and Northumberland.

Noted for their spectacular aerial displays during the courtship season, hen harriers are a magnificent sight. 2020 saw the most successful breeding season for hen harriers for 35 years. Sixty chicks fledged from 19 nests across Northumberland, Yorkshire Dales, Cumbria and Lancashire.

The Swinton Estate in North Yorkshire has good numbers of birds, including a winter roost with a watching hide, and has adopted a variety of conservation measures to encourage the species. Again, they are ground nesting amongst the heather so sticking to footpaths and keeping dogs on a short lead control is essential to minimise disturbance. 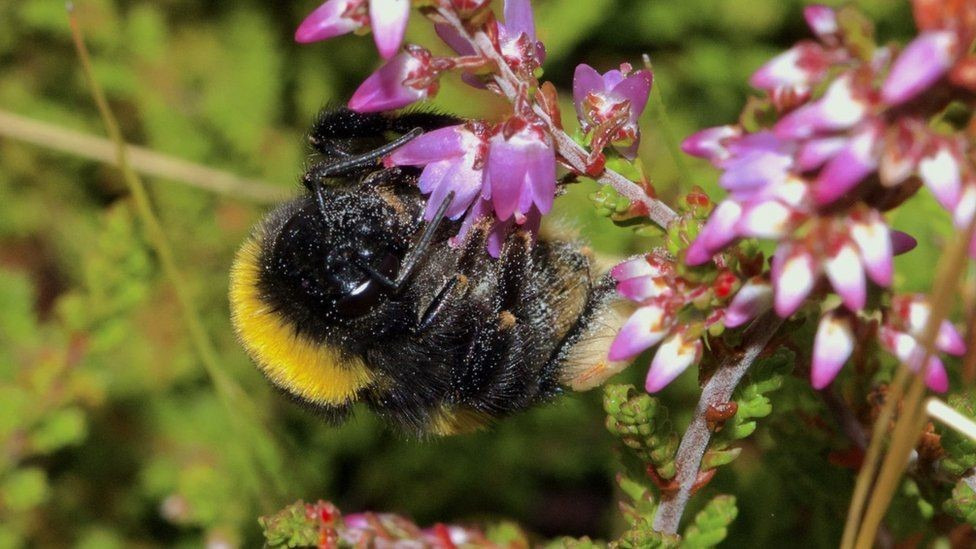 Bees
Heather honey has been described as ‘the caviar of honey’ and many beekeepers will take their hives up on to their local moors in August to feast on the rich purple heather bloom. Heather moorlands are also a great place to see wild bees foraging.

Heather contains more of the substance callunene than any other flower – which protects bees from a harmful parasite. Some say heather honey has more health boosting properties than Manuka honey but you can pick up a jar for about £6!


Black grouse
Black grouse are rare with only around 1,000 males left in England. Once found in every county they are now only found on the fringes of heather moors actively managed for their smaller brown cousins, the wild red grouse.

The large black males compete in an extravagant display of dawn dancing called ‘lekking’ flashing their brilliant white tail feathers in an attempt to attract a mate. Always stay at least 100 metres away from the birds if you want to watch this courtship ritual, or follow the Northern Pennines Moorland Group on social media for more information about where and when to see them.


Mountain hares
The Peak District is the only place in England where the mountain hare can be found. Distinct from the common brown hare, it has population of about 2500 here. It is native to the Scottish Highlands but was introduced to the Peak District where they survive on grouse moors due to predator control and good quality heather, which they eat.

Climate change may threaten this unique English population because it is adapted to the highest cold mountains. Their winter coat provides good camouflage in the snow, turning white with a hint of blue/grey in the summer to blend with their moorland habitat. They also have shorter ears than brown hares and an all-white tail. They will move downhill to look for food in periods of heavy snowfall.


Common lizard
The common lizard is seen regularly in the North Pennines on heathland, moorland, woodland and grassland, where they will bask in sunny spots.

The common lizard is variable in colour, but is usually brownish-grey, often with rows of darker spots or stripes down the back and sides. Males have bright yellow or orange undersides with spots, while females have paler, plain bellies.

If threatened by a predator, the common lizard will shed its still-moving tail in order to distract its attacker and make a quick getaway. It can regrow its tail, although it is usually shorter than the original. 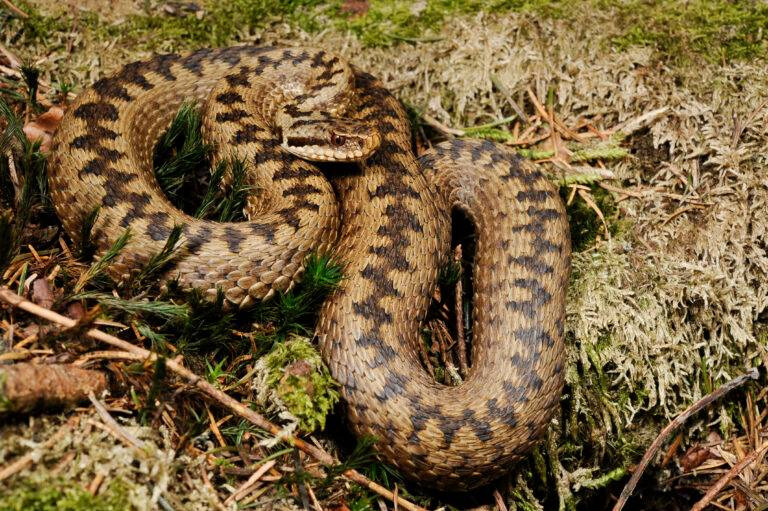 Adder
Adders prefer dry heathland areas, but they are also found in woodlands, grassy banks and sand dunes. The Forest of Bowland and the North York Moors are likely places to see them.

Adders emerge from hibernation in the early spring and do have a venomous bite so watch where you put your feet walking the moors and keep your dog on a lead.

Adders do not lay eggs and instead give birth to live young in late summer. You may see evidence of their presence by finding a shed or ‘sloughed’ skin which they do regularly. These were thought to have magic powers so are a prized find!


Lapwing chick
Lapwings return to the upland areas during the breeding season and head to the lowlands for the winter. Their preferred habitat is wetland with short vegetation.

Adult lapwings are very distinctive due to their long crests and striking black and white plumage with an iridescent sheen and highly acrobatic flight.

Lapwing return to the grouse moors for example in Nidderdale every spring to nest and fledge their young. The fluffy chicks are well camouflaged in vegetation but may be seen crossing paths or tracks from the late spring and are an endearing sight.

Again, they nest on the ground and need to be left in peace. Adults have a distinctive alarm call and will try and draw threats away from their nests and can be seen ‘mobbing’ avian predators in the air to protect their young.


Red grouse
A common sight across grouse moors in Scotland and the north of England, the iconic red grouse is unique to the UK and Ireland.

Male grouse with their distinctive red ‘eyebrows’ will respond noisily from a prominent tussock or knoll if visitors are perceived to be trespassing on their mating territory in the spring, sometimes pecking at cars as well as people!

Females can lay up to 14 eggs and they make great parents shepherding their young – which hatch in May - to find insects that chicks feed on for the first 14 days and then to find fresh heather shoots.

Unlike other game birds, the males continue to play an active role in childcare staying together in a family group called a covey well into the Autumn. They are well camouflaged against the heather and females will sit tight when on the nest – look where you put your feet, stick to footpaths if possible and don’t let dogs run free.