It is hard to think that is it now over 40 years since The Stranglers first burst onto the punk scene.

The line up might have changed since then but lead singer Baz Warne seems like he always been in the group, he even shares with the audience that he now lives in Leeds.


Also by Graham Clark...
Pete Tong And The Heritage Orchestra Shine With The Ibiza ClassicsLet’s Rock - The Retro Festival Celebrates The Music Of The Eighties In Fine StyleNile Rodgers And Chic Give A Piece Of The Good TimesDownload Festival Welcomes Home The Rock CommunityInterview With Kirsten Branston From Bradford Live On Winning UK City Of Culture 2025 Bid
Individual photos of the band members with their hands over their ears show above the stage as they walk on stage.

In reality it is a greatest hits set intermingled with a few album tracks, for every (Get a) Grip (on yourself) there is a newer track such as Norfolk Coast.

The majority of the audience might now be middle aged but the spirit of punk still lives on tonight. The dirty bass of Peaches sounds as fresh as it did in 1977, the golden pop waltz of Golden Brown from 1981 showed a softer sound to the band.

Always The Sun might now be better known by many for its appearance on a TV advert, but again it showed a mellow side to the act, whilst the melodic Duchess from 1979 might have surprised many as it was a change of direction for the band at the time.

Bass player Jeam-Jacques Burnel shares the vocals with Baz Warne, with his menacing glances and Burnel still doing those leg movements, they both bring a commanding stage presence to the fore. 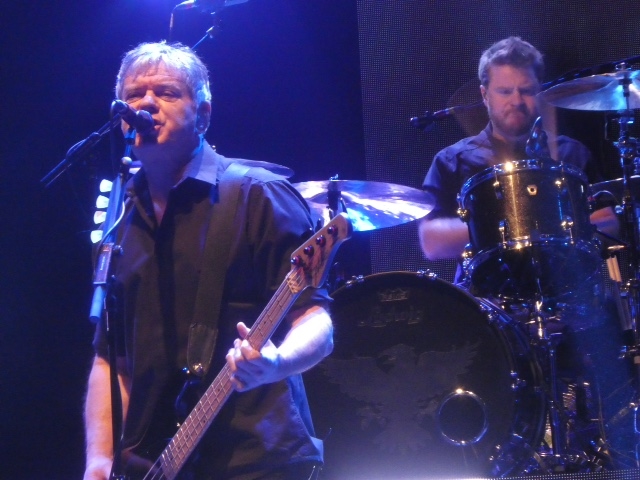 Jean-Jacques Brunel and Jim MacAulay
Aged 68, keyboard player Dave Grenfield is now the oldest member of the group, he stands behind his banks of keyboards looking down from his stand sipping from a cool bottle of beer in between the tracks.

No More Heroes is saved for the encore as the fans at the front po go and mosh like it was 1977 again. It might be 41 years ago but the band still can cut it live.