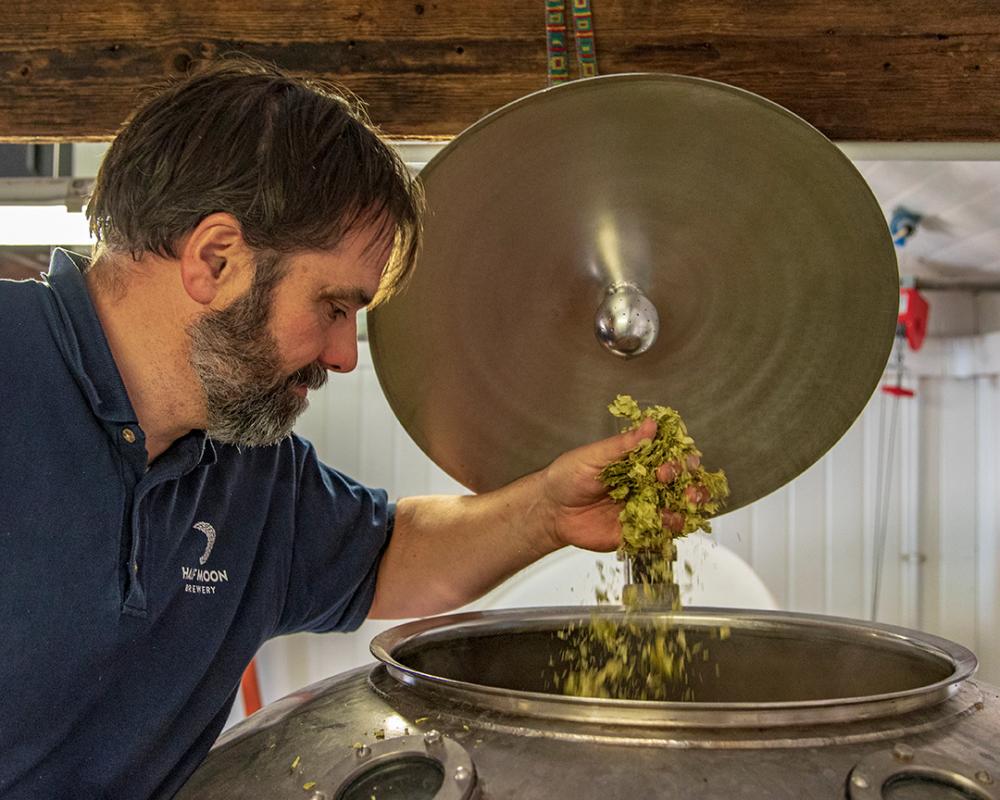 Tony Rogers
This week’s Wednesday Wallop is a lovely traditional copper-coloured beer, Old Forge Bitter, from Half Moon Brewery. Advertised as ‘a very bright amber-coloured ale with a soft spiced lemon and honeyed flavour,’ it certainly is a bitter of distinction with an instant appeal. You don’t need more than one quaff to tell you that. A pleasingly malty caramel aroma overlain by piney citrus hops hits the nose. It pours a nice autumnal gold colour and has a beige head which is not quick to disappear. 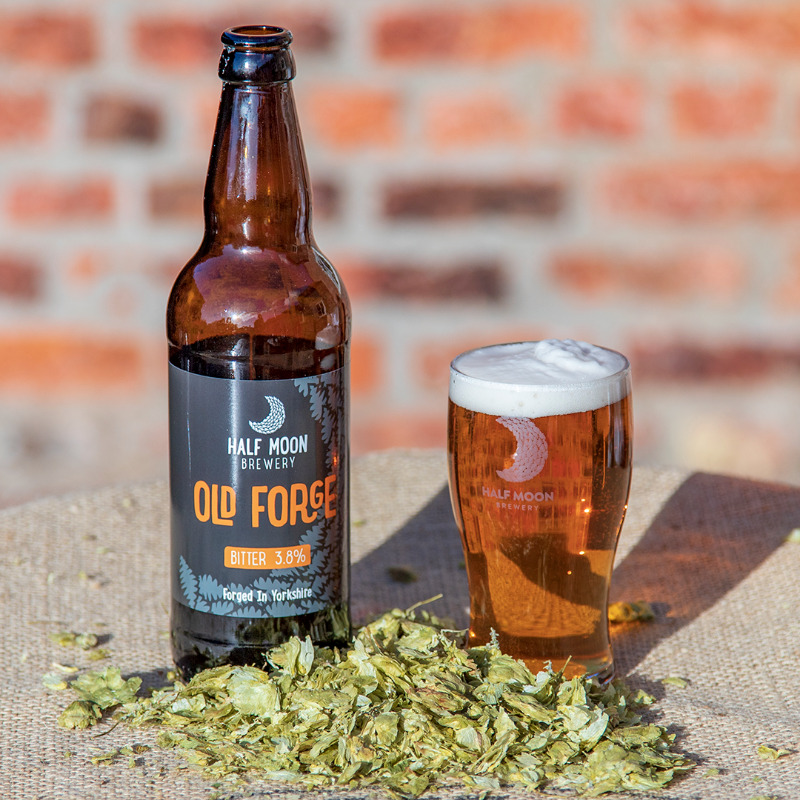 The first impression on the palate is of a delicate fruitiness which presumably comes from the British Bramling Crosshop. As you place your glass on the table, you begin to conclude it’s a mellow beer, moderately bitter the way you like it, and with a nice clean afterglow of lemon and caramel. At 3.8 % ABV you are entitled to call it a session beer, if you use such terms, and entitled accordingly to settle down for a session. Nice.

It takes its name from the brewing premises, an old blacksmith’s workshop, converted by Tony Rogers in 2013 when along with his wife, Jackie, he set up Half Moon Brewery in the picturesque village of Ellerton, south of York. The name of the brewery is a reference to their house, which served as a pub during the nineteenth century. 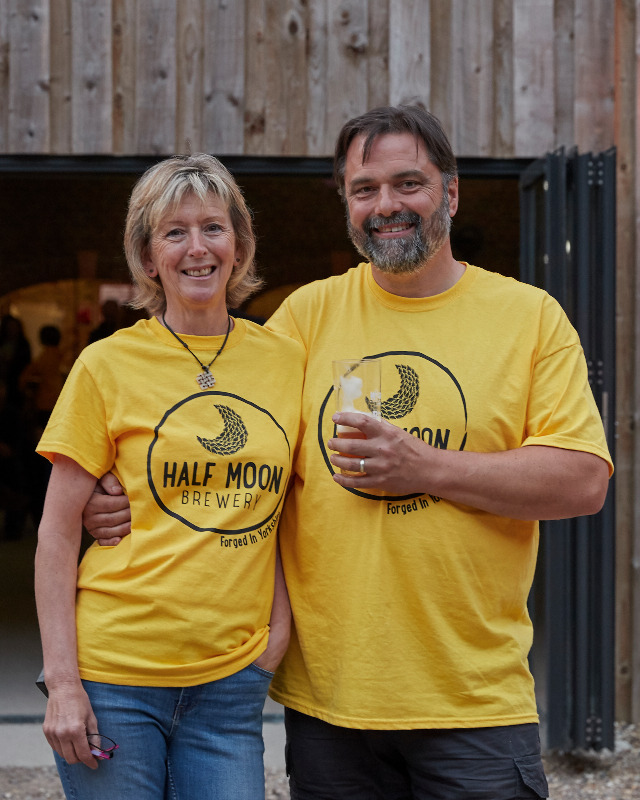 Jackie and Tony Rogers
In an industry dominated by beards, Tony’s thick black one is particularly impressive. An engineer by trade, he was able to design and install a five and a half barrel kit to his own precise specifications, perfect for the low-ceilinged building. It is genuinely a family firm: Tony is the master brewer, assisted by Jackie; she is in charge of everything else, accounts, publicity, development, occasionally assisted by daughter, Olivia.

Over the seven years of their existence, Jackie estimates they have brewed more than 100 different ales. ‘Tony thinks them up,’ she says and laughs. ‘We like to offer a good variety of different styles, including bitters, milds, porters and stouts although the reality of the trade is that pale ales outsell all others.’ Do people still partake of mixed, a much favoured drink of my youth, I ask. ‘Oh yes, it is still popular in the East Riding particularly in Hull, which was always well known for it.’

Normally, they brew six cask beers of varying styles and have permanent lines throughout Yorkshire, including some hugely prestigious places, not least the famous Kelham Island Tavern, in Sheffield, where it is safe to assume they know a thing or two about beer. The locals there have a particular thirst for Dark Masquerade (3.6 ABV), a most pleasing brown ale. The Whalebone in Hull, a gem of a pub overlooking the River Hull, is a particularly congenial place to get a pint of Old Forge and again this is a mecca for real ale people, having been voted Hull & East Yorkshire CAMRA Branch City Pub of the Year every year from 2014 to 2020. If you wanted a permanent line anywhere in East Yorkshire, it would be here.


Also by Andrew Liddle...
King Neptune's Baptism Of FireWhy I Didn’t ClapThe Pub ReopensBeer Of The Week: Selby Blonde From Jolly SailorBeer Of The Month Of July: Leeds' Incomparable Best
In fact, you’ll find their beers in pubs all over Yorkshire and usually at festivals across the country. At the moment, they are hoping to expand further, into bottle-conditioned beer. Following yesterday’s announcements, they are looking forward to the pubs opening again in the next few weeks - which includes their own popular taphouse attached to the brewery, normally open on Friday nights during the summer months.

Since Covid struck, they have been ticking over, decanting their casks into bag-in-boxes and bottling some, delivering within a 20-mile radius, to places such as Pocklington, Howden, Selby, Market Weighton, Beverley, York and surrounding villages. Recently, they have begun to successfully operate a nationwide courier service.

Details can be found at: http://www.halfmoonbrewery.co.uk/

‘Brewing is a labour of love for us and there’s nothing more rewarding than people enjoy our beers,’ Jackie says with a sunny smile as I look hopefully at my empty glass and enthuse about what I’ve just enjoyed.
More articles in this series...
King Neptune's Baptism Of FireWednesday Wallop: A Milk Stout Called TonkokoThe Wednesday Wallop: Ilkley Brewery Offers Hope To Slake Summer ThirstWednesday's Wallop: Cragg Bitter From Little MoorWednesday’s Wallop: Ilkley Brewery’s Mary JaneWednesday's Wallop: Taking The Ridge Way Route