The Weekender: Lovingly Artisan The Secret Behind Sourdough 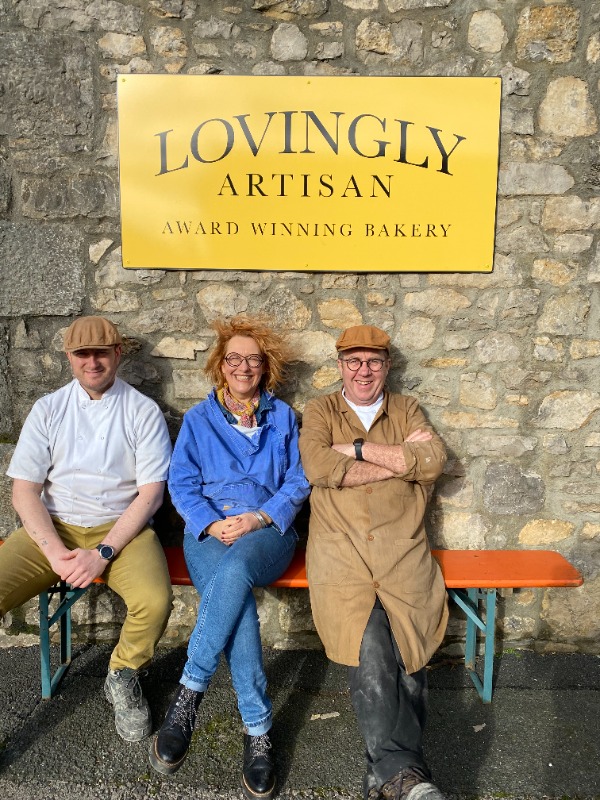 (L-R) Dean Fletcher., Catherine Connor (Aidan’s wife) and Aidan Monks
“What did you have on your sourdough toast this morning? Smashed avocado, eggs, or perhaps just butter and homemade jam?’’ Asks Aidan Monks, co-owner of Kendal and Altrincham based bakery Lovingly Artisan.

Already my taste buds are working overtime at the thought! Aidan and his team craft handmade artisan breads at the two bakery sites. Each loaf is made using three simple ingredients, water, salt, flour and a little magic here and there in the form of Marmite, Mrs Kirkham’s Lancashire Cheese, Chilli, Kalamata Olives and Ancient Grains bread. 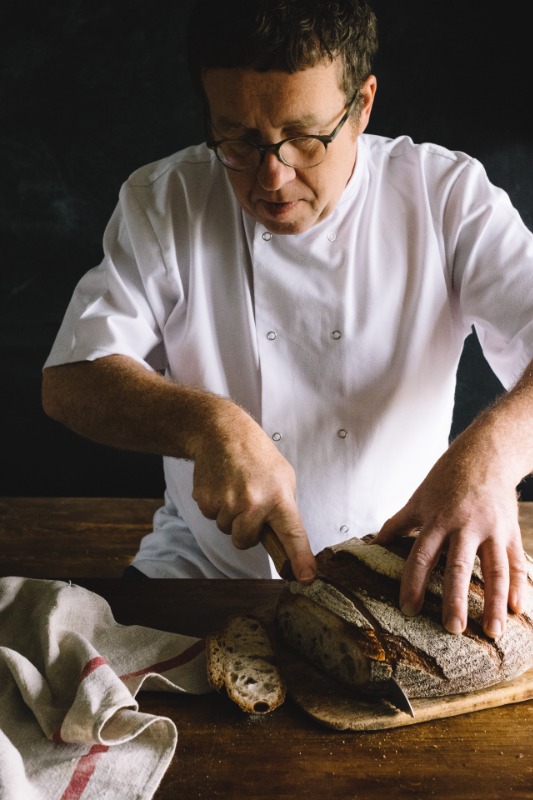 Aidan Monks
When Aidan starts talking about the breads, he crafts I’m left salivating at the thought. Aidan is all about returning bread to its rightful place at the centre of the table at mealtimes. But Aidan’s bread isn’t any old bread, it’s sourdough which as he goes on to explain ‘’is a remarkably good multi-functional food, one that should form part of a balanced and nutritious diet and is also brim full of vitamins and minerals, which are hugely beneficial to the body in so many ways.’’

Aidan goes on the explain "There are some fairly significant reasons as to why artisan made sourdough bread is healthier compared to its mass manufactured cousins.’’

He adds: ‘’Most of us probably think of the good old supermarket sliced loaf when we talk about bread. But that’s not what Aidan’s about, his breads are so far removed from the mass-produced factory manufactured loaves many pick up as part of their weekly shop. In fact they are almost completely the opposite. 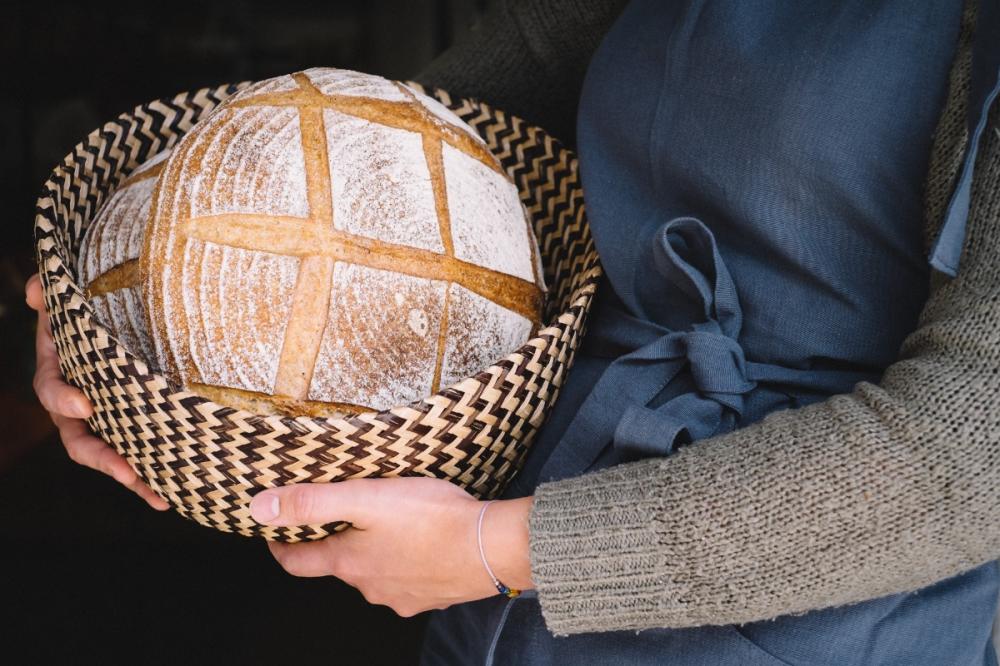 In an authentic artisan made sourdough loaf there’s no sugar, no commercial yeast, no added fats, no added vitamins or minerals, (our loaves don’t need any because the flour hasn’t been bleached to hell and back and had all the goodness removed), and above all else they are not made using the Chorleywood process of mass manufacturing. This is a process, which was introduced in 1961, by the British Baking Industries Research Association at Chorleywood, specifically to produce bread quickly by speeding up the fermentation process. Which meant a loaf could be produced in around four hours from start to finish, rather than the traditional bulk fermentation process artisan bakers tend to use the world over, which takes several days and means the bread making process is much more labour intensive and protracted.’’

I can see I’m certainly going to learn a lot during this interview, especially plenty about the health benefits associated with sourdough breads made with ancient grains.


Sunflower Seed Danish Rugbrød
Aidan goes on the explain: “The very rapid growth in the consumption of sourdough is largely down to the increasing interest people are showing in how their food is made, who makes it, who grows the ingredients in what they eat and the provenance of those ingredients. Sourdough in particular has had a fairly stellar rise since the 1970s when bakeries in America reintroduced the artisan made loaf to their consumers, and it’s gone from there. But that said when you look more closely at traditional bakeries across Europe and even to some extent in the UK the traditional artisan made loaf never really went away, it was lurking in the shadows to some extent, hidden from view because of the rise of its mass manufactured cousin.

There’s no getting away from it sourdough breads is genuinely more digestible by the human gut. All the nutrients, vitamins, and minerals contained in the bread are not diminished by the natural fermentation process, which means when you eat a slice your body can actually utilise the available nutrients without your body struggling to break them down. You see Andrew, it’s the glycosidic bonds in the flour that hold on to the vitamins and minerals in a sourdough loaf, whereas the yeasts used in commercially made breads break them down almost completely, which is why they have to be added back in, but without there being anything added to help aid their absorption, which means in reality it’s a pretty pointless exercise.

I’m left wondering if that is the main reason why there’s been a rapid increase in the popularity of artisan breads and baking.

But Aidan has a slightly different take, he believes that we’re learning more about artisan foods and breads in particular, through mediums such as Instagram, where images and videos of artisan made produce, ethically grown produce are tapping into people’s desire to be healthier, to be more supportive of their local producers and above all be more conscious about what they are eating, where it comes from, who has made it and the impact it has on the planet.


Lovingly Artisan Bread Shop
Lovingly Artisan is at the forefront of much of that, which is just one reason why Aidan is a Real Bread Campaign Ambassador. As part of the Bakery’s responsible sourcing process they’ve established over a number of years a very strong partnership with arable farmer Andrew Wilkinson, who runs a farm in Northumberland, Gilchester Organics, which specialises in growing ancient and heritage grains.

Aidan explains: “Meeting Andrew gave us a real grounding at the very start of our business, and we felt very much we were part of an entire discovery process. You see ancient grains have very different properties to modern wheats, the taste, texture are all different. Then when you add in things like rye into the mix it starts to get really interesting. Rye is high in antioxidants, and it adds addition flavour and texture too, all of which not only enhances the breads you create but also increases their health benefits as well.’’

Sourdough bread making has been around for thousands of years it’s really nothing new, but we wouldn’t use any other process when crafting out breads with Andrew’s amazing produce. For us it’s all about respect; for the ingredients we use, the people who have taken the time to grow those ingredients, the quality of the bread we create and ultimately thepeople who buy and eat the breads we create.


The beauty of artisan baking, according to Aidan is that a baker using that medium can work with different flours, not necessarily wheat based, there are other grains available, like Einkorn, Emmer and Spelt, all of which bring very different properties to the breads they are baked into. There are no half measures, ultimately you need to know how to work with these ingredients to get the best out of them and that can be a process of trial and error.

He explains: ‘’Einkorn, Emmer and Spelt are known as ancient grains, why because they’ve been around for thousands of years. As flours they essentially have much shorter protein strands, which makes it more difficult to turn them into an elastic dough. For example Emmer when it’s milled and turned into flour, looks and feels a bit like semolina, but to get the best out of it you need to soak it. How do you find that out? It involves lots of research. All of which takes time, but once you’ve gathered all of the relevant knowledge it all begins to slot into place, and you end up creating amazing breads.’’

“Bread used to be at the centre of the dining table, indeed in many cases it was the plate as well! But there’s absolutely no way mass manufactured bread deserves to be there. As a Real Bread Campaign Ambassador my main objective is to ensure artisan made real sourdough breads reclaim their rightful place at the centre of our dining tables.

Sourdough breads are easily digestible; they are both probiotic and prebiotic making it a valuable addition to the human gut biome. It’s also genuinely low GI, even properly made white sourdough is low in GI. Alongside that there’s also no significant insulin spike when sourdough breads are consumed, compared with modern breads, which is all down to the way sourdough’s lactic fermentation adjusts the starch in the bread.” 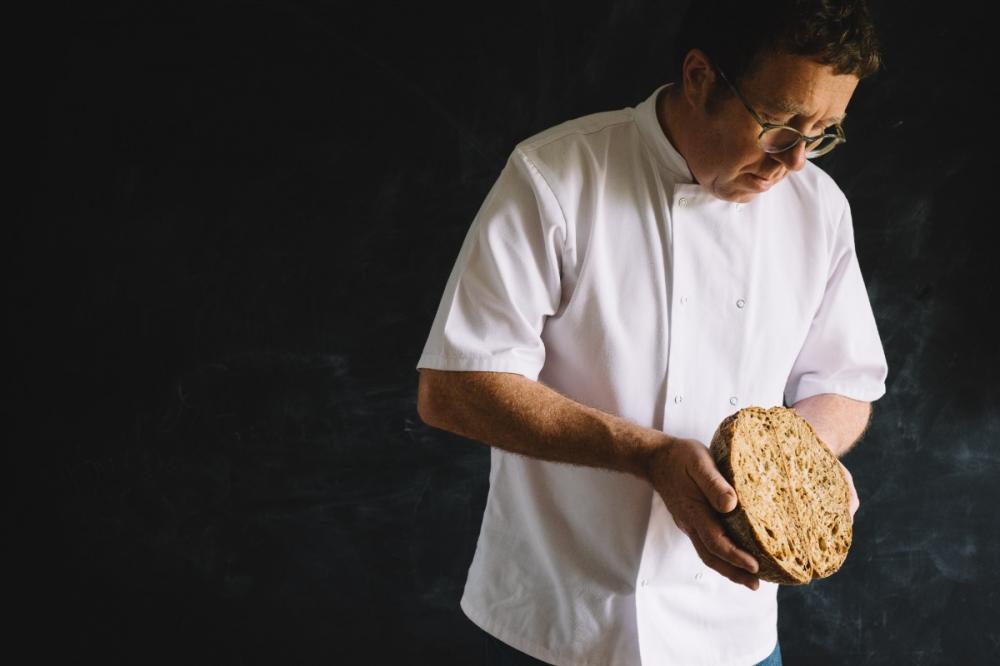 Aidan Monks
“Lactic fermentation is an incredible thing and bread is only one food where the process is used in the either preparation or preservation process. We’ve eaten lactic fermented foods for hundreds and hundreds of years, cheese is a classic example, but this ancient knowledge is now backed up by science, we now know that our gut biome is centred on lactic bacteria. Why is this important? Well because The variety of gut bacteria we have in our digestive systems is critical in ensuring our immune system functions properly and ultimately this governs our health and wellbeing. We’ve evolved symbiotically over millennia alongside lactic bacteria, which is one reason why foods utilising lactic fermentation processes like sourdough breads are so easily digested by our bodies compared to modern breads. Essentially the mass market bread sector has taken the ‘staff of life’ and turned it into the exact opposite – with a raft of illnesses linked to heavily processed foods, including the likes of obesity and diabetes, which are becoming an ever-increasing issue for the NHS.’’


Spelt, Golden and Brown Linseed Seed Bread
Looking to the future I ask how Aidan intends to remain ahead of the game. He explains: “We’ve adjusted our business over time to respond to ever changing demand. Now 55% of our businesses is retail, around 35% is wholesale and the remaining 10% is online. No doubt the latter will continue to grow, it became quite important during the pandemic for many businesses and it’s a developing element within ours. of ours.”

Aidan can see me looking puzzled and second-guesses me. “Sourdough stays fresh for a long time, which means we can send bread anywhere in the country. We ship our freshly baked breads on the day they are baked, wrapped in recyclable waxed bags, packed in a specially designed recyclable box, (which also doubles up as a handy bread bin), to its intended destination where it can then either be frozen for later use of consumed.’’

The following day a box arrives, brim full delicious breads, each wrapped in waxed paper. Yes, I did freeze a couple of loaves and the rest were eaten there and then. (The frozen loaves were deliciously tasty and really enjoyable when I came to use them a week or so later). 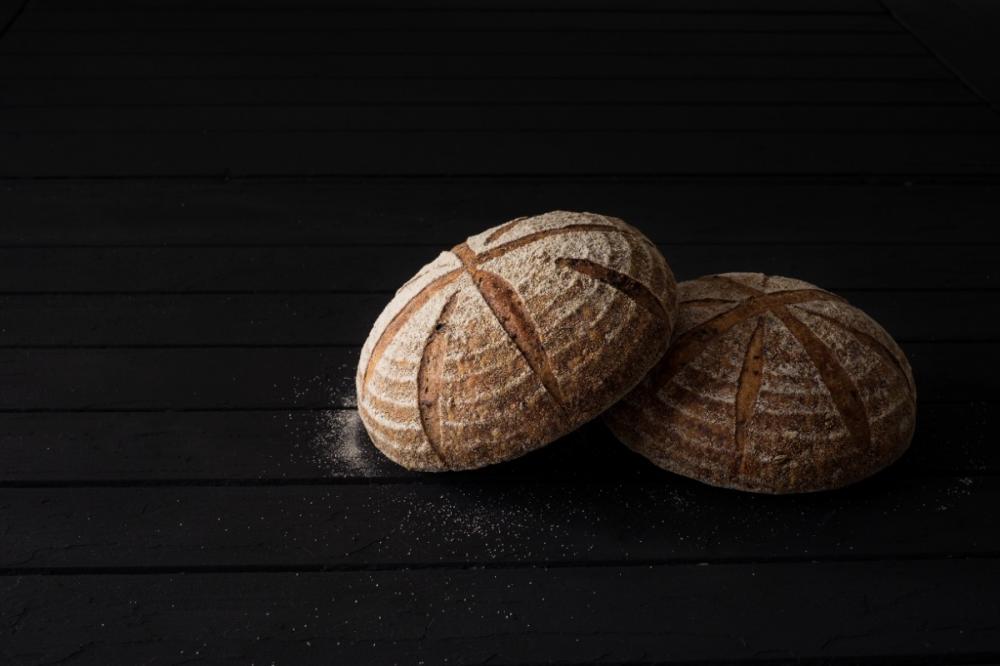 Malted Barley
It’s obvious to me that that Aidan and his team are fully focused on providing not only value for money but are also committed to offering the most nutritious loaves of bread possible. I suppose it all comes down to knowing your subject, being passionate about what you do and taking people on that journey with you. As I write up my notes my eyes focus longingly on a malted barley sourdough loaf sat on the counter waiting to be cut up and devoured once I’ve finished… Handily it’s one of Aidan’s award-winning breads, recently collecting the title of Britain’s Best Loaf in the Wholegrain Category at the Farm Shop & Deli Awards earlier this month.