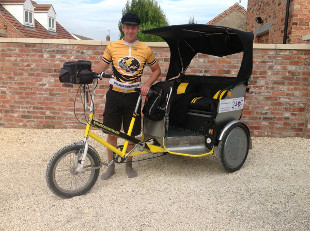 World Rickshaw Taxi - all prepared
Luke Parry attempts to pick up thousands of people on his 16,000 mile journey around the world by bicycle rickshaw.

"Why a rickshaw? Who can say no to a free ride?"

Having just recently graduated with a 1st studying Mechanical Engineering at the University of Warwick, Luke Parry, 22, set off to circumnavigate the world by bicycle rickshaw from Howden School, East Yorkshire on the 10th September 2013.

His journey will last over a year and a half and is expected to cover 16,000 miles. Throughout his journey he will attempt to pick up as many passengers as he can for free as part of his research project to document and share the lives of people. The World Rickshaw Taxi is all about participation and the adventure comes from the passengers on the adventure. These encounters will be catalogued through his website worldrickshawtaxi.com and each passenger will share a message to the world by writing in his taxi log book.

Along with sponsorship and advertisement, Luke will attempt to sustain himself through the generosity of passengers which can be anything from food, drink, shelter, live music, entertainment and even the occasional hair cut.

His planned itinerary heads south through central England, towards London and then onwards through Eastern Europe towards Turkey. Afterwards he hopes to find a safe way through the Middle East towards South-east Asia and then onwards into North America.

In the past, Luke has always dared to challenge both himself and the perceptions of what adventure is. The synergy between travelling and cycling has always been his passion, but he has never shied away from exploring the unknown. Last year, he successfully paddled 127 Miles from Birmingham to London along the Grand Union Canal in a bathtub for the British Red Cross.

Not content with seeing the world through the eyes of a tourist, or becoming blinkered trying to break a record, he wanted to discover the real world by meeting its people. "Breaking a record means nothing to me. After meeting many people unexpectedly on previous trips, I soon realised that it was those unforgettable experiences that truly made it a real adventure."

He plans to document as much of his experiences along the way and share this through the website and encourage people to follow and join the adventure. "There is a lot of world that remains un-reported and undiscovered and it would be unfair, unjust to keep that to myself. World Rickshaw Taxi hopefully flips the idea of an adventure on its head."

Luke, will be working with his former geography teacher, Andrew Mason at Howden School to give a fantastic opportunity for students to discover and learn more about the world without relying on outdated textbooks and video tapes. "I wanted to give something back to the school that helped me get where I am now. Geography is very broad subject that makes students appreciate our increasingly interconnected world and in particular the economic, social and environmental consequences to humanitarian development, which I believe is fundamental to many disciplines."

This is a remarkable adventure and will be a true challenge. Along the way, he will have to overcome many challenges; the first will be surviving through the Winter, 2000m above sea level in the Anatolian Plateau, Turkey.

For more information about the World Rickshaw Taxi and to follow his progress, please visit worldrickshawtaxi.com