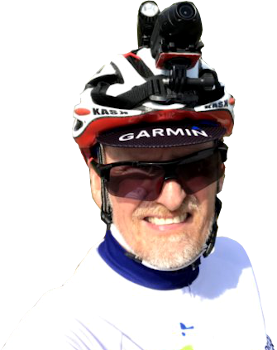 
Commissioned artwork to mark the challenge completion. Picture by Hollie Garrett a.k.a The Yellow Shark
I hadn’t slept much overnight: the wind and rain battered the bedroom window and I was wide awake having my second cup of tea when my 4.30am alarm went off. Thankfully, the forecast promised that the overnight rain would “peter out” and it was to be a dry day. I messaged my friend Danny and delayed our 5.30am start by half an hour. Not only because of the weather, but because one of our Cycling Club colleagues had been up all night doing her own lockdown challenge of running a mile every hour for 26 consecutive hours - a marathon distance!

I had been browsing my Strava whilst eating my porridge (listening to the rain and wind) and really felt for Michelle who had posted on Strava how she was struggling with motivation with the solo runs in the night. So, I decided we’d go along and surprise her and give her our encouragement - it was only a couple of miles off our route anyway. Michelle was thrilled if at first shocked to see us, so we pedalled slowly alongside for half her mile before she had to about-turn to return home. Fortunately, the rain was now quite light, although heading towards Blackburn and on my second ascent of Shear Brow (Danny was in for a treat!) the clouds were so low we were in a wet fog.

Suddenly on the fast descent from Abbey Village on the A675 we left the cloud to enter a totally different world of blue sky. The sun shone brightly all the way to Longridge via the beautiful roads down the Ribble Valley and out against Ribchester. A quick pit stop at the Shell petrol station in Longridge and we put our waterproofs back on again as the drizzly rain had returned.


Canal-side breakfast at the White Bull, Bilsborrow
The undulating lanes from Longridge to Bilsborrow on the A6 are a delight to ride and having now completed over 40 miles we were starting to feel hungry. I had planned a breakfast stop down by the River Ribble, another 20 miles away, so when we spied the mobile breakfast van outside the White Bull Public House/Restaurant on the A6, we thought we’d struck gold. It was only 8.45am, so another shock that somewhere was open at this hour on a Sunday. We even had a great place to eat breakfast on the banks of the canal behind the pub - very sheltered and the toilets were open for us too - a luxury we’d lost during the pandemic!

We left Bilsborrow and took the quiet route via Moss Lane toward Woodplumpton and towards Preston Docks. I am unsure what the major new road building project is around Cottam and Bartle, but the diversion had us lost on a new housing development for about 5 minutes. We soon got back on route and in no time at all we were heading across the cobbles over the Ribble into Lower Penwortham. More quiet lanes via Midge Hall and on to Bretherton. We had further heavy showers to deal with so we took shelter in Croston under a bus shelter for ten minutes whilst the rain was at its heaviest.

My route was meant to take us through Parbold and Wigan, but the rain clouds looked bad in that direction, so we decided to head towards Chorley via Coppull Moor as the skies looked brighter in that direction. We sheltered again from a heavy shower at Fredrick Ice Cream Parlour, and then headed down the A6 via Blackrod and Wingates towards home. Our detour meant we needed another 10 miles to reach the 100 for the day (I was totalling 931 for the challenge) so we continued on the A6 all the way into Salford and turned back North on the A666 at Pendleton.

Just one more day to go!


Challenge Complete!
I was in fantastic spirits for the final ride: weather forecast was for sunny spells and NO rain! I rode up the A6 to Westhoughton to meet my friend Warren who was riding the final 100-mile challenge ride with me. The route took us down to Culcheth through Leigh and over Warburton Bridge before heading south-west to the river Weaver at Northwich. From Northwich we cycled lots of lovely, quiet lanes I was unfamiliar with to Lower Peover. A Salford club member, Robbie Harcourt, had done this route a few weeks ago and recommended “Snowdrop Cafe” at Grasslands Garden Centre. What a gem of a café! We sat outside on the benches enjoying what seemed a rare bit of sunshine, very pleasant indeed.

There were more wonderful, almost-deserted lanes to Ollerton before we had to take a short diversion for roadworks, then through Mobberley and Ashley before passing National Trust’s Dunham Massey Park and we retraced our earlier route over Warburton Bridge to Leigh where Warren and I went our separate ways. The detour meant I had clocked a whopping 110 miles for the ride today.


Celebrating with a well-deserved beer
A cracking end to my challenge, which was to ride a 100-mile ride every day for 10 consecutive days. I did five of them solo and for the others I had had one buddy to accompany me. A huge thanks to Steve Mosley and Warren Gavin who got me through a ride each and a massive thanks to my “No. 1 buddy” Danny Collins who did three days and well over 300 miles himself in seven days - an achievement in itself.

I had cycled 1,041miles in 10 days – it was now time for a few days of rest!
More articles in this series...
Companionship And Chocolate: Keeping The Challenge On CourseCrossing The Border: Half-way There!A Dash To The CoastThe Cycle Diaries: The Challenge Begins