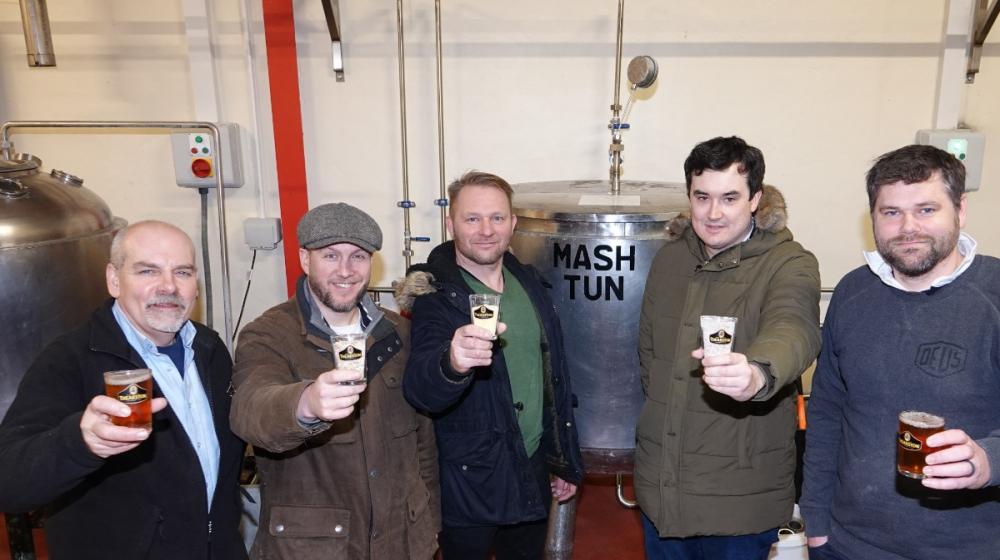 Having a s-mashing time! Pictured from left with T&R Theakston head brewer, Mark Slater, are Harrogate Roundtable members David Haslewood, Andy Furniss, Gary Thompson, and Stuart Wright
Masham brewers T&R Theakston Ltd, as one of the festival’s main sponsors, has brewed a special beer for the two-day festival, taking place at the Crown Hotel on Friday, March 6, and Saturday, March 7.

It is hoped this year’s event – which will feature a host of real ales, ciders, lagers, gins and prosecco plus food and live music – will raise in the region of £30,000 for three charities, St Michael’s Hospice, Martin House Children’s Hospice and Carers’ Resource.

And last week, beer festival committee members visited the Masham-based brewer, where they “mashed in” the malt to begin the brewing process.

The finished product – which will be racked into 9g (nine gallon) casks - will take pride of place on this year’s cask ale bar.

The beer, which has been named PERLE JAM is a 4.0% ABV, superbly refreshing “blonde” style cask ale brewed with Perle and Mittlefruh hops, which give a brilliantly spicy floral aroma to a delicious, dry flavoured ale. Refreshment in a glass!

Victoria Bramley, T&R Theakston Ltd’s Marketing Manager, said: “It’s been our pleasure to support the Harrogate Charity Beer Festival for over 15 years, and as always, we are looking forward to next week’s event.

“We are delighted to be able to brew a special beer for the 30th anniversary, which is now fermenting superbly and due to be racked ready for next week’s festival.

“In addition to this one-off, we will be bringing a selection of our legendary ales, including our latest addition, Theakston Summit (Cold Pale Ale), which is an extra chilled cask conditioned pale ale.”

Stuart Wright, chairman of this year’s Harrogate Charity Beer Festival, said: “Being our thirtieth year, it is fantastic that we have had the honour of brewing a beer at the famous Theakston Brewery for this special occasion.

“Because of our long association with Theakston we are delighted that they have been able to undertake this important task – and we were thrilled to be invited to help brew the beer. We can’t wait to sample the final brew.

“The Harrogate Charity Beer Festival is one of our major fundraisers which, over the years, has built up a loyal following. It’s always a great atmosphere and a superb opportunity to raise money for three fantastic charities by enjoying a glass or two of beer.”


Further details about the Harrogate Charity Beer Festival – and the beer naming competition - is available from its website, https://harrogatebeerfestival.co.uk/