There Could Be Temples: Still By Christopher Meredith 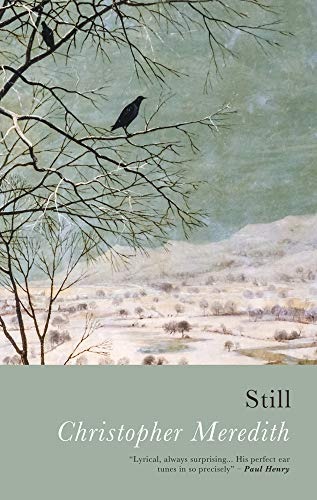 Christopher Meredith’s richly engaging new poetics of time and observation gives unconscious lyrical direction to Roland Barthes’ philosophical enquiry into the capturing of a photographic moment. In the latter’s seminal work, Camera Lucida, Barthes’ Punctum – an apprehension of meaning that is uniquely personal to the viewer – may signify a world of drama and volition in two faded, coffee-stained dimensions. Meredith’s initial contemplation moves the limitless possibility of Punctum into the realm of negotiated memory and, particularly, continuity in absentia. And it is instructive how well served his own enquiry is by a natural proclivity for lyricism and concision.

In the weighty opener, ‘Moving Picture’, the paradox of our instinct for ‘freezeframing’ moments into stasis for ease of later recognition might also be the starting frame for a collage of moving pictures whose constituency is ‘always incomplete and moving / still’, as though the protagonists’ storied lives might sustain elsewhere, in aetherial perpetuity. Barthes’ point obtains once again in the gorgeous, formal quatrains of the title poem, whose gentle rhythms oil the gears as memory, and perception of memory, disengage. Or perhaps not, since the character of the recalled moment renders any difference immaterial: Meredith’s poignant vignette transfigures the question of truth into one of beauty:

‘Again. That backlight is the sun. Same hand slowly
raised, same slow-inclining head, same kind smile,
his shape at the handrail this time hunched like
a passenger who’s slipping from the quay’. (‘Still’)

The ambiguity of the verse’s final line precipitates a suggestion of oncoming night, as the observed figure slips into parallel existences of exile and memory. For that sense of an elsewhere simultaneously budding, of slippage and of coterminous histories, is pervasive right across this fine collection. The subtle shift of meaning indicated in the subtitle to ‘Standing place’ - ’Stanza’: Italian, ‘room’, ‘standing place’ - ushers in a liminal space between expectation and realisation, where the things we don’t see lay equal claim to a species of reality:

‘When you step in to the empty room
you interrupt whatever it was
that the room wasn’t doing’.

…and when we do see, our perception may be skewed, like shepherds observing hints of smoke and a ‘tinsel of small flashes’ of battle at several removes, and conducted in the silent distance, entirely disconnected from their knowledge and experience. The six hundred dead of a fateful Charge ruffle fewer feathers than Icarus dropping out of the blue, but ‘Something, it seemed, had been decided’ (‘A strife of ants’), an alternative reality somehow mapped. Meredith’s formal skills – he has a striking gift for rhythm and metaphor – illuminate the psycho-geography of his mental landscapes. The backward glance at a long dead figure in ‘Upstairs’ (a mother, perhaps), restores the figure’s sense of duty – ‘to tidy up as best you can / and turn and leave’ – in a room whose atmospheric presence is promnesial: ‘the walls somehow exhaling truth’.

There is no ‘standing place’ for nostalgia or elegy in the joyous hymn to moving on of ‘Clearing song’, whose resolute anapaests take no prisoners. The ‘now’ is the key, here, as the narrator more or less rejects the blandishment of imaginative uncertainty in favour of the eye-opening ‘palace’ of the present, whose walls are papered with the figurative accoutrements of language, and its power of affirmation.


Christopher Meredith
Meredith’s astonishing observational facility is, in the traditional sense, disinterested. A bristling battery of formal skills and a calculated approach seem to enable detachment, even if the poet’s tone is sometimes betrayed by the sustained insinuation of history and experience. In his short series of Llandudno poems, any suggestion of elegy is mitigated by cool, faintly sniffy, contemplation. On the surface, a lyrical amble round the hinterland of a holiday resort – Meredith’s fine triplets in ‘There could be temples’ share commerce with Larkin in ‘cut-price crowd’ mode – the languid pace describes an undirected wander. And as ‘chinoiserie pavilions’, a ‘woman in gold sandals’ like a concubine, and the pelting nippers hove into view, an ingress obtains into a strange souk whose presence is conjured by inference, as road gives seamlessly onto wooden boards and a pier head kiosk heralds ‘Change’ as though a manifestation of transition, to a new church of oblation to commerce.

The wonderful ‘North coast swing’, a series of more or less regular septets in three parts, takes a more philosophical turn. The hand of Larkin emerges once more as the imperative for engagement is balanced by sustained detachment, creating, in the round, a tonal disconnect where a vigorous inventory of supportive details is counterpointed by a sense of obligation. That the ‘fun’ seems to be forced is borne out in the vague discontent of the Prom’s punters, yet the shared annual rite remains, as though queueing and gawping were a necessary adjunct to enjoyment in this ‘place called Holiday’. Fitting, in a terrain of cod-jazz, Brigadoon and Brig-Y-Don, of mobility scooters and offshore gas rigs, that Meredith should seek cultural and geological certainty, of what lies before, beneath and elsewhere, in the kind of reflection that afforded another Welsh poet, R. S. Thomas, consolation:

‘Somewhere eastward out of earshot the roads
are roaring still. Behind our backs unseen
the fractured centuries of this country press
in the raindrenched mass of farms and rock’.

Nothing remotely to regret in wearing the influence of others; Meredith carries his debt, and erudition, lightly, as if the absorption of mood, tone and approach were natural conduits for re-invention. The final group of poems in Still, collectively ‘Still air’, is a subcutaneous celebration of teeming nature against the backdrop of a changeful landscape. Rendered in the fractured lineation, and with the staccato impressionism, of a distracted observer, the series is rich in images which startle the reader in direct proportion to the drama of the narrator’s first encounter, and yield a sense of the cosmic in the microcosmic: ‘ice crystals finialled like / the ideograms of stars’ (‘Winter woods’); more still, a mirror to a sort of consolation in the unfolding of the bigger picture:


Also by Steve Whitaker...
Poem Of The Week: 'The Beach Couldn't Be Found' By Katrina NaomiDragging The Snare: All The Men I Never Married By Kim MoorePoem Of The Week: 'That I Could' By Jane ClarkeFlattening The Curve: By Degrees - David TaitPoem Of The Week: 'Bertram' By Nigel Forde
These lines are beautiful because distilled of superfluity. As, in essence, is ‘Village birds’, a brilliant four-part meditation on the arcane and limitless instinctual capacities of birds, that reverses convention by creating a narrative from the perspective of the animals themselves. The conceit, like the ‘Martianism’ of Craig Raine, is both incredibly skilled, and effective. Vouchsafing an extraordinary series of perceptions, whose real signification is a mystery to their land-bound counterparts, Meredith’s depiction is corrective, a necessary counterbalance to vaulting human ambition and neglect: ‘The effort leaves you spent’, says the bird/narrator, ‘your flat world waste’. A recognition of misused existence, of fundamental separateness, of human isolation, is almost unbearable to contemplate in the endless realm of air:

‘The privet rooms are meant for us.
We hold our councils on your walls

and play their concert
in a hall of winds’.

By any yardstick, Still is a major achievement.

Still is published by Seren.