Those Who Watch By Night In York 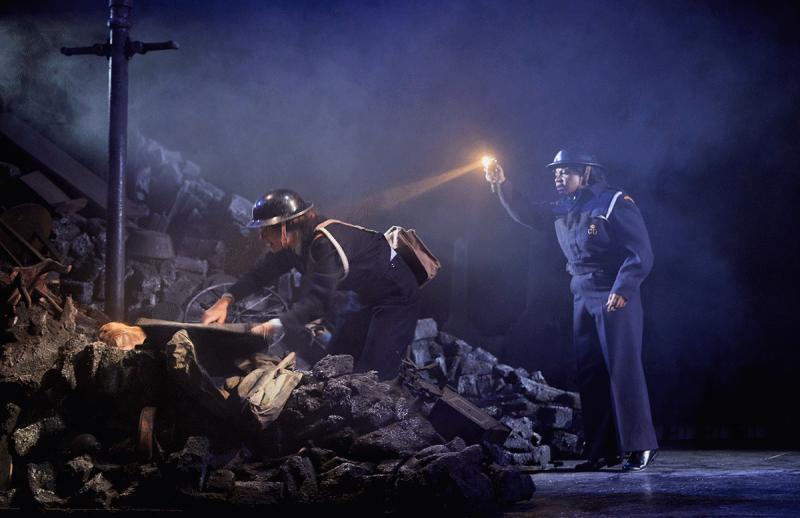 Phoebe Pryce and Mara Allen - photo by Mark Douet
The Night Watch is a play that dwells among the wartime dislocation, confusion and disorientation of the Blitz – and reflects on the reorientation and redirection that comes from the emotionally liberating effect of the proximity of death.

Beginning in 1947 and slow-burning, unlike the fires of London, at times maddeningly elusive and allusive, the play creates puzzles that will only receive partial explanations when it drifts back in time to the outbreak of war. Its conventional element is the tale of Viv (Louise Coulthard), a young working class woman who has a fling with a married soldier who gives her tinned peaches and a baby.

There is the related and conspicuously sketchy story of her sensitive brother, Duncan (Lewis Mackinnon), who turns conchie the moment his call-up papers arrive (much to the disgust of his homophobic father, the pleasure of whose company we fortunately do not have to experience in this necessarily truncated adaptation) and who is taken in by Mr. Mundy (Malcolm James), grey by name and nature. He is befriended by the rather enigmatic journalist, Robert Fraser (Sam Jenkins-Shaw), the good sort of chap who might have had the makings of a romantic lead had he not refused to fight and before he more or less disappears from the narrative.

So much for this mildly interesting token. More than a cameo, let’s call it the obligatory sub-plot. The main thrust of Sarah Waters’ Booker-nominated fourth novel, adapted ingeniously by Hattie Naylor, takes its impetus from the sudden intoxicating efflux of empowerment experienced by so many women at the time when called on to do jobs previously considered the work of men. The beauty of the thing is that the love that normally dare not speak its name is treated in almost conventionally clichéd romantic terms. An ambulance officer falls in love with a woman trapped beneath rubble after a bombing raid. It’s a female ambulance driver. These things happen.


Also by Andrew Liddle...
A Harrowing Game ShowBarnstorming Premiere At The SJTAyckbourn Revival In YorkOnce In YorkA Grand Panto
Phoebe Pryce brings a terrific nobility to Kay Langrish, the brave heart, indeed the play’s heart, emotionally destroyed by the girly Helen, conventionally blonde and pretty, as captured by Florence Roberts, with whom she falls passionately in love, throwing over her partner, the perfervid Julia (Isabella Urbanowicz), for her. Things are actually much less stressful and less complicated during the horrors of the Blitz, and she struggles in peacetime to find purpose and emotional direction, spending her evenings in strangely furtive visits to the cinema. The only human warmth she receives comes from Mickey (Mary Allen), a former ambulance corps colleague and confidante.

Helen may owe her life to Kay, but she’s gone and fallen in love with Kay’s ex, Julia, and is herself on the rack suspecting her new love might have rekindled her feelings for the old love they have in common. Actually, it’s a bit like a sort of Sapphic bouquet of barbed wire, with it permutations of characters.

At times, it all seems a bit too dark, in a sense. How to light a wartime blackout was obviously Nic Farman’s problem and he achieves some truly eerily atmospheric effects, augmented by searchlights and flashlights, none more romantically ethereal yet erotically charged than the big scene with Julia and Helen fumbling their way across London before tumbling against each other in the shadow of St Paul’s. It’s straight out of a Bilge and Moon novel, except it’s not straight but it’s certainly out. It has all the clarity of the moon, so to say.

Sadly, a lassitude seems to set in with the end of the war, a kind of emotional vacuum is created. Unlike a conventional novel or play, there is no happy ending, no sad ending, no catharsis, no climactic twist, no resolution at all to be honest. That is its genius. Life's like that.

A York Theatre Royal and Original Theatre co-prodution, adroitly directed by Alistair Whatley, here is a brilliant play, true in spirit to the original but an independent dramatic art that illuminatingly flits among the insubstantial shades, as Sappho might have put it, capturing the joy and exultation of the suppressed and unuttered and deeply vexed other side, as it was in historical context.