Tom Twisleton And The Long Road To Ghana: Poetry In Settle 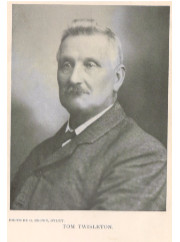 Tom Twisleton
The upsurge of interest in the Settle dialect poet and farmer Tom Twisleton throughout 2017 is thanks, in no small measure to Settle Stories.

With funding from the Heritage Lottery Fund Young Roots programme, and in collaboration with Settle Sessions, local schools, youth groups and descendants of the Twisleton family, the centenary of the poet's death has been commemorated in the best way possible: a restoration of the local vernacular of the Victorian period and a renewed recognition of the social and cultural threads which held the fabric of Craven society together.

The fragmented and geographically-mobile world we now live in does not proceed without some sense of continuity, and it is instructive to find, amongst Twisleton's poems, encomia to virtues of restraint, family commitment and plain common sense, all of which still hold in varying degrees. We understand the language too, more or less, indicating that linguistic patterns endure even as they sometimes mutate.

Wonderful, then, that Settle Sessions should extend an invitation, last Friday evening, to round off its year's activities with book launches and readings at the Folly, including a new book of poems from Sue Vickerman, a pamphlet by much travelled local poet and writer, Jean Harrison, and, of course, the winning entries of a children's poetry competition organised by Settle Stories in culmination of the Tom Twisleton 100 project.

It was heartening to see several embryonic poets take centre stage and gratifying to note that the winners were only a few amongst many entrants; the Twisleton story has fired the imaginations of local young people and encouraged some to begin writing in earnest.

Each winning and commended poem offers a reflection of life in Settle and surrounding communities and all are dignified by wide use of poetic forms, powerful metaphors, and highly-charged descriptive passages.

Max Clark's 'Yorkshire Rose' is a calling card for spring, a simple expression of awe at growth and re-awakening, whilst 'Settle is my Home' by Daniel Craig celebrates an intensely felt love for place. 'The Dales' by Freddie Fairweather-Smith celebrates the National Park in all its multivalent seasonal glory, and Oliver Stroh's crystalline Haiku, 'A Farmer's Morning', precisely captures a dawn moment.

A shame that not all of the successful youngsters could be present at the event - some of the readings were undertaken in absentia - but the words spoke eloquently for themselves.

As you might expect from a poetry group of the broadest textual palette, the evening's tone was by no means restrictive.

Jean Harrison's reading from her new pamphlet 'The Tilt' recalled her life in Ghana in the sixties and re-visitation of the experience thirty years on, and in a quietly tentative but profoundly moving rendering over the two halves of the performance, we were exposed to the colonial resonances of an alien African universe.

Ms Harrison reveals a position through close observation of detail and by the extrapolation of contrast. Her innocence, as she emerges blinking into the Ghanaian light of the 60s, is illuminated as her search for locators yields, instead, the blindingly colourful, the seemingly bizarre, and the ersatz British.


Also by Steve Whitaker...
Poem Of The Week:Owdham Footbo' By Ammon Wrigley (1861-1946)Poem Of The Week: The Wireless By Jean StevensBurned By Light: Dovetailing - Gathered NotesNight Swimming:Towards A General Theory Of Love By Clare ShawPoem of the Week: 'Together' By Robert Gibson
Her compulsion to name names has the effect of investing the incidentals of African life with invigorated irony, especially as the newly independent becomes post-colonial over the intervening period, and the thinning, needful 'clumps of our kind' diminish.

Returning in the 1990s, the revelation of Accra from the 'Tilt' of an aeroplane's wingtip vouchsafes an aerial-view recognition where once 'nothing' spoke, and experience allows an overview of mutable change.

Sue Vickerman's selection from her new volume 'Adventus' was well chosen, giving a synoptic cross-section of the themes - anxiety, love, loss - she examines against the backdrop of approaching Christmas, Brexit and a disintegrating Europe. Like Jean Harrison, she is a well seasoned traveller, with a fine dispassionate eye for apparently insignificant detail, often viewed obliquely.

Good poetry is often conceived in hindsight and at several geographical removes, and much of Vickerman's is written from the perspective of distant, sharply felt, memory.

The figurative bruising remains: her measured rendition of the poem 'The end of love' gave visceral and emotional life to the shocking pain of relationship breakdown.

The clarity of her diction throughout the reading only added to the sense of disconcertion - the audience were left in no doubt as to the near-lachrymal proximity of loss.

Tom Twisleton, one suspects, would have been quietly pleased with the efforts of both Settle Sessions and Settle Stories to preserve and continue his remarkable legacy.