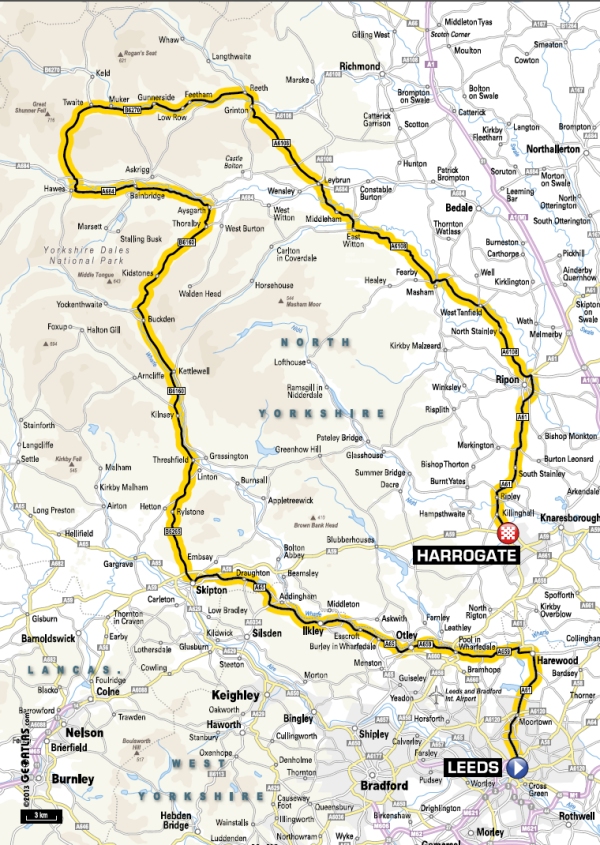 Stage 1 : Day 1
This morning the details of the Grand Dťpart of the Tour de France 2014 were revealed in the imposing setting of the residence of the British ambassador to France, just off the Champs-Elysťes where the UK had its first winner of the race in 2012: Bradley Wiggins. The 101st edition of Le Tour will start with two attractive and spectacular stages in the county of Yorkshire, before finally arriving in London, seven years after the success of the Grand Dťpart of Le Tour in 2007 and two years after the London Olympics.

The first stage will start from Leeds Town Hall on Saturday 5th July 2014 and pass through 190 km (120 miles) of gorgeous North Yorkshire countryside, including the splendid Pennine section of the Yorkshire Dales National Park, before reaching Harrogate, where the first Yellow Jersey of the Tour de France 2014 will be awarded.

On the second day, riders will leave the historic city of York for Sheffield on a very tricky 200-km (125 miles) stage whose final section, especially with the formidable Holme Moss to climb, will resemble a short LiŤge-Bastogne-LiŤge. 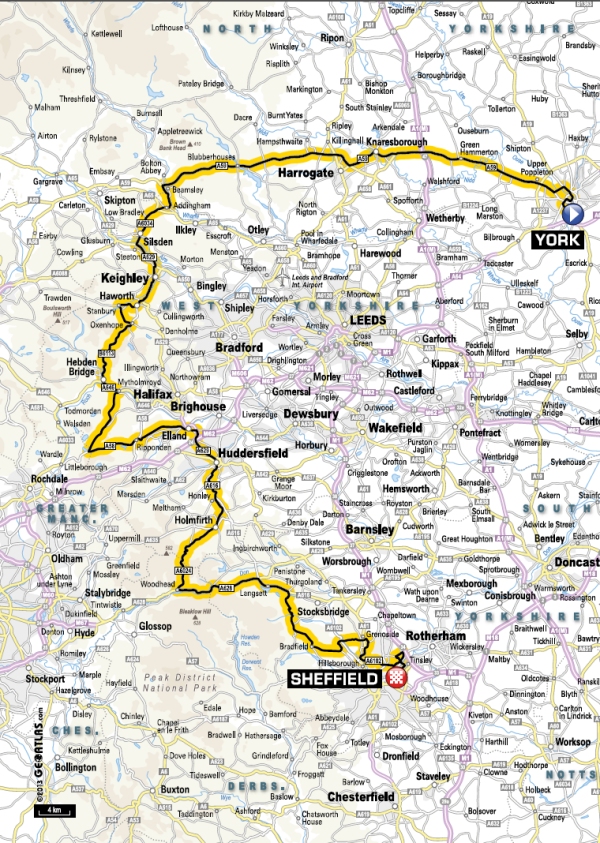 Stage 2 : Day 2
After two stages in Yorkshire, the peloton will head south on Monday 7th July, with a stage from the University City of Cambridge to London. Passing the Olympic Park, the race will continue along the banks of the Thames and the city's monuments - Tower Bridge, the Tower of London, Big Ben, Westminster Abbey - where it is hoped the capital city will provide the perfect backdrop and a picture-postcard setting for millions of followers of the Tour de France. As in the prologue of the Tour de France in 2007 and the road races of the Olympic Games in 2012, the finish will be on The Mall in front of Buckingham Palace. Royal indeed!

"Yorkshire is a region of outstanding beauty, with breath-taking landscapes whose terrains offer both sprinters and attackers the opportunity to express themselves," said Christian Prudhomme, Tour de France Director.

"We have encountered a phenomenal desire to welcome the Tour de France and no doubt that popular acclaim will be particularly in evidence over there. The Grand Dťpart of the Tour de France 2007 in London, the first ever organised in the United Kingdom, will remain unforgettable. We are very glad to return, seven years after, to this magnificent city."

Gary Verity, Chief Executive of Welcome to Yorkshire said: "The routes of the Grand Dťpart will showcase some of Yorkshire's iconic cycling climbs and the county's stunning land and cityscapes. The peloton will be technically tested as they tackle some challenging terrain in what are sure to be two exhilarating days of racing in the county. The British public's response since the news broke that the 2014 Grand Dťpart would be hosted in Yorkshire has been overwhelming and I am sure the route announcements today will encourage even more people to come to the county to experience for themselves the phenomenon that is Le Tour."

Keith Wakefield, Leader of Leeds City Council, said: "As a city we are absolutely thrilled to be hosting the start of the world's largest annual sporting event in 2014, and speaking personally as an avid fan of the Tour de France and keen cyclist for over 25 years, I am incredibly proud and excited that Leeds has been given the honour of starting this amazing and legendary race. The Grand Dťpart is going to be a real celebration for everyone in the city and our very special guests from all over the globe to enjoy, highlighting the best that Leeds and Yorkshire has to offer for a few days that none of us will ever forget."

Boris Johnson, Mayor of London added his voice to the celebrations, saying: "It has been the most incredible epoch in the history of cycling that any of us can remember; and I am absolutely delighted that the world's greatest cycling race is coming to the capital.

"People will see London framed by shooting velocipedes for what will be a fantastic spectacle of sport. I am going to be in the crowd and I hope thousands more will too."

For more information on the Grand Dťpart of the Tour de France 2014 on see www.letour.fr