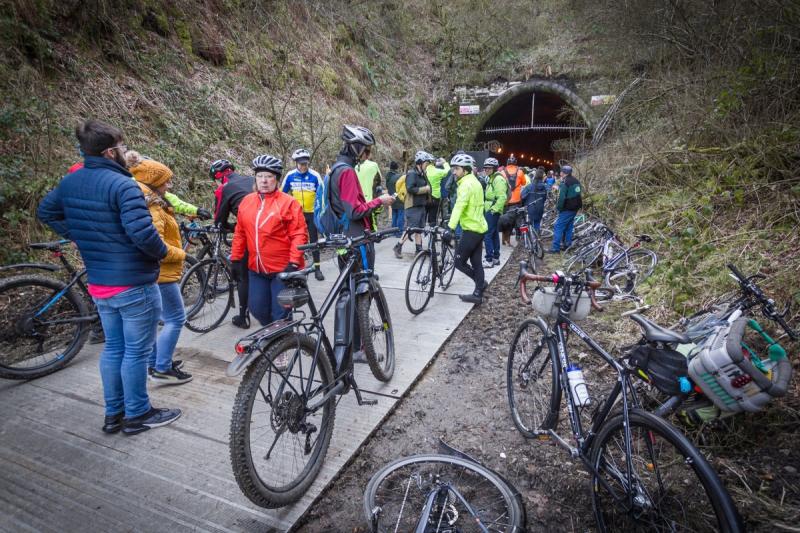 A few of the cyclists gathered at the tunnel on 28th January 2019. Credit: Four by Three
Stakeholders, cycling groups and heritage campaigners gathered at a disused railway tunnel in West Yorkshire yesterday (28th January) as the battle to save it from permanent closure enters a crucial phase.

Built in the 1870s, Queensbury Tunnel was the engineering centrepiece of a railway linking Halifax to Bradford and Keighley, but it closed in 1956 and parts of it are now in poor condition. Highways England is currently carrying out £1 million worth of improvement works to the structure, after which it intends to spend £3 million sealing and partially infilling it, subject to planning approval.

Campaigners believe the money would be better invested on repairing the tunnel to form part of a cycle network connecting the communities formerly served by the railway. Although this would be more expensive, a Sustrans study found that the network would deliver £37.6 million in social, economic and tourism benefits over 30 years.

As part of the ongoing works, contractor AMCO-Giffen has installed lighting and a temporary roadway for about 120 metres at the tunnel’s northern end, offering a glimpse of how it might look if the cycle path proposal went ahead. On Monday, more than 100 cyclists from across the District took part in a ‘solidarity ride’ to the tunnel to take a look inside, joining about 50 supporters of the campaign and Councillors from Bradford and Calderdale.

“More and more people are buying into our vision - seeing the tunnel as a transformative asset, not a liability that must be destroyed. Providing safe, high-quality infrastructure is vital if we are to deliver the much-needed culture shift away from our reliance on cars to more sustainable forms of transport, particularly for local journeys.”

Councillor Dot Foster, who leads on cycling issues for Calderdale Council, said:
“One of the biggest barriers to cycling is having to mix with traffic on the roads; the tunnel would be traffic-free - which is perfect - and it avoids having to climb over Queensbury hill.

“Crucially, it also opens up opportunities for communities along the route in terms of education, employment and leisure. This project works on so many levels which is why there’s a huge amount of enthusiasm for it.”

However Queensbury Tunnel cannot be reopened as a cycle path unless another statutory body takes on its ownership. Members of Bradford Council’s Executive Committee will consider the future of the Victorian structure at a meeting on 5th February, with a recommendation that they “fully recognise and support the benefits in saving the tunnel for the enjoyment of future generations and its potential conversion to a leisure cycling facility connecting Bradford city centre and Halifax town centre.” 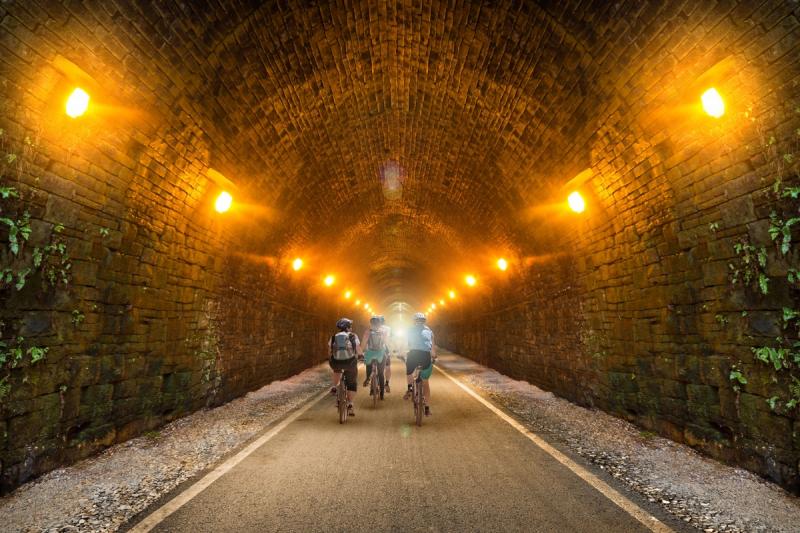 How the tunnel could look following conversion to host a cycle path. Credit: Four by Three
Councillor Alex Ross-Shaw, Portfolio Holder for Regeneration, Planning & Transport said:
“A Bradford to Halifax cycleway with Queensbury Tunnel at its heart has such huge potential. It would be a transformational project, not just for the area but for Yorkshire and the North of England.

“You could see from the huge turnout yesterday how many people are passionate about restoring the tunnel and we’ll continue to make the case to government to support us with feasibility funding and more time to assess how this great asset could be restored for future generations.”