Referring to the novels of Ivan Turgenev in his Partial Portraits, Henry James (1843-1916) wrote, “They gave one the impression of life itself and not of an arrangement, a réchauffé of life”. Having recently extolled the virtues of Turgenev’s On The Eve (1860), I described that novel as a flawed literary gem. Fathers and Sons (1862), however, represents the apex of what James found so impressive in his friend’s writing. Eclipsing the earlier novel in terms of ideological force, psychological insight and lyrical beauty, this Russian masterpiece is the apotheosis and literary Koh-i-Noor of Turgenev’s canon. It’s a novel as didactic as it is scintillating and as poignant as it is provocative. For me, it matches the brilliance of Turgenev’s more esteemed contemporaries and its chief protagonist, Bazarov, is perhaps one of Russian literature’s greatest jewels.

Lermontov’s (1814-1841) Pechorin and Turgenev’s Insarov, and Bazarov, the nihilistic hero of the novel, are iterative manifestations of authorial dismay. Once again, in Bazarov, Turgenev employs Blakes’s “Grain of Sand” poetic concept to stunning effect. Bazarov allows Turgenev to intimately portray generational and ideological collision, whilst simultaneously immersing us in the lives of all his novel’s characters.

James wrote in his essay on Turgenev of 1897 that assiduously rendered character depiction was, “the great light that artistically guided him”. Fathers and Sons is perhaps the ultimate expression of Turgenev’s facility for this authorial device. James went on to say, “no one has had a closer vision, or a hand at once more ironic and more tender for individual figure seen in its idiosyncrasies, all its particulars of weakness and strength, of ugliness and beauty, of oddity and charm”.

Nikolai Stratkhov (1828-1896), Russian philosopher, literary critic and friend of Leo Tolstoy wrote in praise of Turgenev’s characters - their wondrous depiction gifted Fathers and Sons the potential to present the reader, “with human life in its broadest and fullest meaning.” Turgenev knew that for his novel to achieve its artistic purpose, truly effective characterisation was not a token literary device, it was a sine qua non. Beyond the novel’s thematic pugnacity and philosophical clout, this is a book worth reading just to witness his genius at work. I know I’m raving, but trust me, this is, if not an incontrovertible point, one well worth exploring for yourself !

A cornucopia of vividly presented archetypes are as thematically illuminating as they are real. From the emotionally sterile and intellectually detached Anna Odintsov, through to the delusional aristocratic mannequin Pavel Kirsinov and his pretentious sartorial leanings, each character is a breathing embodiment of an aspect of Russia’s soul. Arina Bazarov, the hero’s maudlin mother, and her fifteenth century Muscovy style aristocracy and belief in Urodivie, (Holy Fools), epitomises pre-reform old Russia. Nikolai Kirsinov and his patriarchal liberalism gently captures generational disquietude, as old beliefs meet new ones as voiced by his own son Arkady. The emotional tie between them is as profound as the chasm between their ideologies.

Almost no element of Russian society is left unrealised or unexamined. Avdotya Kukshina provides us with a comical portrait of an eccentric pro-feminist and self-deluding émancipée. Viktor Sitnikov brilliantly portrays an impressionable and intellectually insincere progressive Slavophile man about town. Vasily Bazarov, the father of the novel’s hero, exemplifies a strata of rural bourgeois who turn to Peter The Great (1672-1725) and Pushkin for inspiration, whilst ineffectually trying to remain modern, and are now “on the shelf” personal ideologies as outdated as his decaying estate.

Arkady Kirsinov, Bazarov junior’s university friend and acolyte, perfectly captures the spirit of an educated, enlightened, but intellectually naïve aristocrat. Muzhiks (peasants) and serfs, bonded or otherwise, all drip with obsequious, but resentful respect for the patriarchal system. Unobserved, they exhibit their contempt for the Dvoriané (landed gentry). Governors and “big wig” Tchinovniks (civil servants) are shown as imbecilic, self-serving fools. We even have an aristocratically pampered greyhound and an ancient saturnine princess, both as decorative and superfluous to society as each other. This panoply of personalities constitute the stars of Turgenev’s societal constellation, each shining an unforgiving, censorious light upon the novel’s seminal themes. 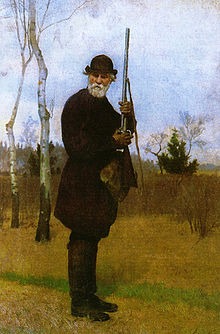 Ivan Turgenev hunting (1879) by Nikolai Dmitriev-Orenburgsky (private collection)
Yevgeny Vasilevich Bazarov, a nihilist revolutionary and maverick medical graduate with a fatal lack of self-knowledge, but possessing an adamantine desire to expose folly, sits at the centre of this cosmos. Bazarov is the dynamic cynosure through which all is exposed and everything is challenged by dint of his interaction with the novel’s characters. As the quintessence of Turgenev’s authorial virtuosity, Bazarov is, to my mind, the key to understanding both the novel’s intellectual potency and its seminal messages. He’s also one of the most admirable, detestable, courageous and emotionally turbulent creatures I have ever met in literature! Even Turgenev found him perplexing, writing to A.A. Fet when accused of the novel being a thesis in the latter’s review - “I do not know if I love him or hate him”!

Looking at what gave rise to his creation and ideological belief system, exposes the novel to our understanding perhaps as effectively as Bazarov’s cynical intelligence exposes the calcified and quirky beliefs of those he encounters. Like blood pulsing through a body, Bazarov’s Being inhabits this book at the cellular level. Bazarov, with his wolfish smile and ruthless contempt, leaps from the pages as a fully-formed entity, less a mere fictional character and more a real man living within a novel. To achieve this feat, Turgenev kept a diary for six months inhabiting the persona of Bazarov and recording how his character reacted to the events around him.

So, as with much Russian literature, a sprinkling of contextual elucidation may go a long way towards helping us truly appreciate it, and Bazarov in particular.

1859. A period of profound intellectual and ideological unrest in Russia. Since 1848, revolutionary fervour had swept through Europe. Alexander II had begun a tentative process of reform which would lead to the emancipation of the serfs in in 1861. Into this tumultuous epoch stepped a new breed of educated Russian. Though not sons of the manor, these radical intellectuals claimed equality with the nobility and even went so far as to assert their superiority over the idle rich and the oppressive autocracy ruling Russia. Hegel, Schilling and Pushkin were discarded in favour of the materialist philosophers, Büchner and Moleschott. Russian was in a transitory state just before the bonds of the patriarchal system were broken.


Also by Paul Spalding-Mulcock...
The Phone Box At The Edge Of The World – Laura Imai Messina: A Finely Modulated Meditation Upon GriefOn The Eve By Turgenev: An Allegorical Love Story And A Plea To A NationContext Or No Context...That Is The Question!The First Men In The Moon By H.G. Wells: An Audacious Literary ExperimentMusing Upon L'Autre: An Insidious (De)Foe
Nihilism was an inchoate and abrasive ideology born in the 1840s in Russia. Turgenev took its roots and planted them in his novel. Nihilism, from the Latin for nothing, had begun as a movement repudiating the customary social institutions of marriage and parental authority. By the 1850s, it had become a philosophical doctrine advocating the denial of all authorities in the cause of freedom and social justice. Simultaneously, two opposing schools of thought fought for ideological supremacy. Slavophilism with its anti-Western and deeply patriotic nationalistic celebration of Russia’s authentic identity was on one side. Westernism argued that Russia was essentially European and should model itself upon the societal and philosophical tenets of enlightened Europe.

Turgenev was, along with his friend Berlinsky, a follower of Westernism. Margaret Drabble tells us in The Oxford Companion to English Literature, that he was “closer in both sensibility and literary practice to Westernism than his contemporaries Tolstoy and Dostoevsky”. Yet Turgenev saw this new breed of radical cynics systematically unpicking Russia’s ideological fabric. In so doing, they exposed protected practices and beliefs to to the cold light of hard empirical reason. Nothing escaped the scrutiny of nihilistic cynicism, nothing was immune from their cold-hearted, but resolutely antithetical disdain for determinism and the values of the patriarchal system.

Bazarov was an “adherent of the negative tendencies” and says to his ideological nemesis, Pavel Kirsinov, “it gives me pleasure to reject”. Bazarov has no love for anybody and therefore knows no mercy, yet he loves his nation and tragically yields to his feelings for an aristocrat. Bazarov himself tells us, “the world is a vast workshop and man is born to be a master there”. Irving Howe, the literary critic wrote, “Bazarov is a revolutionary personality, but without revolutionary ideas”. Turgenev launched his complicated, emotionally conflicted agent of disruption into the ideological heart of Russia and used him as a caustic device to call prevailing thinking into sharp account. Ultimately doomed by his own humanity, Bazarov fails to provide solutions. He dies as a consequence of his own curiosity, arrogance and an antiquated medical system in dire straits. He had called Russia to question, but beaten the birds into flight without shooting any of them. Turgenev’s revolutionary critics cried foul!

However, Turgenev had succeeded in that in Bazarov, he had created a man who laid Russia’s soul bare and exposed its unjust truths. He had been useful to Russia precisely because he doubted so much of it. He’d been useful to Turgenev because he’d functioned as the lens of an authorial microscope, probing the body politic and very soul of Russia. Others would come in his wake. Lenin would lead the revolution of 1917 and partially rely upon Bazarov’s merciless gaze to guide his own perceptions.

Turgenev had attempted to write a novel of generational transition, of ideological tumult and of provocative philosophical and political insight. For this reader, he triumphed.

Fathers and Sons provides no answers and, for that reason, cannot be unconditionally lionised. Scrutiny without solution is worthy, but not the stuff of unmodulated praise. However, it did pave the way for revolutionary solutions. From beyond his grave, Bazarov’s penetrating gaze would terrify those it fell upon. A slim novel of enormous significance and potency, what it lacks in remedies it compensates for in sheer authorial flare, conviction and aplomb! I’m a devout fan, though I suspect young Bazarov would remain cynical!