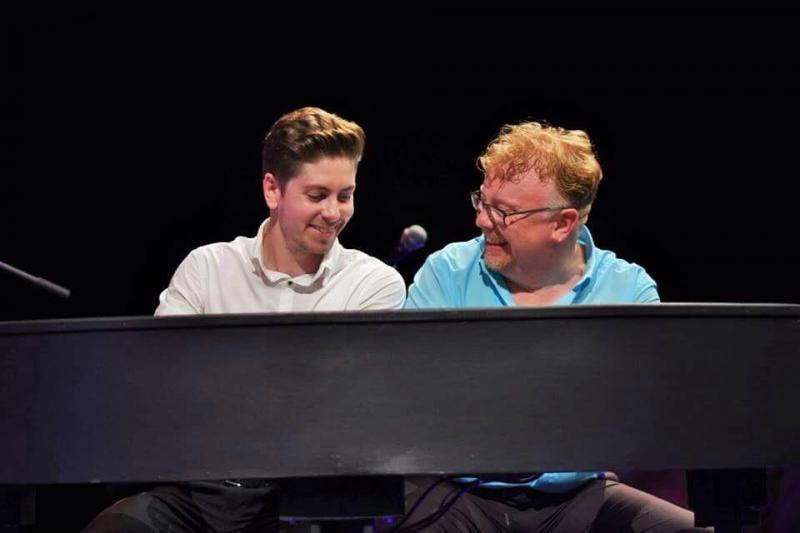 Bonfires were burning bright across the land, the night sky was a pyrotechnic whirlpool and the E.R.T. suffered spontaneous combustion! On stage was not one but two of the hottest Rock’n’Roll piano-pounders in the world. And that’s no hyperbole!

David Barton and Al Kilvo have indisputably taken their piano-playing inspiration, their very raison d’être, from Jerry Lee Lewis, ‘the Killer’, the seminal genius who invented, or more likely, discovered, an explosive way of playing the keyboard, in the early 1950s. Yes, the pumping left hand was that of the boogie-woogie boys of the 1940s, and the honky-tonk tremolos of the right were pure ‘Moon’ Mullican, a forgotten star of Western Swing. But no one before – certainly no one on record – had pecked at the piano, hammered on it, slid along its length as though working a zipper, like Jerry Lee – or, indeed, taken his feet to it.

All of this, by the way, is not to suggest his playing was crude. It wasn’t but neither was it any way sophisticated like that of the contemporary ‘honeydrippers’, Cecil Grant, Joe Liggins, Nat ‘King’ Cole, for example. It was elemental, pulse-raising, mind-blowing.

Announcing himself belting out Jerry Lee’s I’m A Wild One, Al Kilvo was to the very life the Killer, mid-career, when he was hurt and there was a certain mature cynicism in his wonderfully expressive voice. He’s got the verbal inflections, the parlando asides, the self-referencing, off to perfection – and all those Deep Southern vocal mannerisms, the snatches of yodel from Jimmie Rodgers, the dying fall of the Blues, the hollers from the cotton fields, the acclamation of the Baptist chapel. But all of this would be as nothing had he not had a warm voice that actually sounds like the original’s.

Of the very many Jerry Lee Lewis disciples I’ve heard over a lifetime, perhaps only John Lincoln Coughlin, better known as Preacher Jack, was better – and that is some tribute. 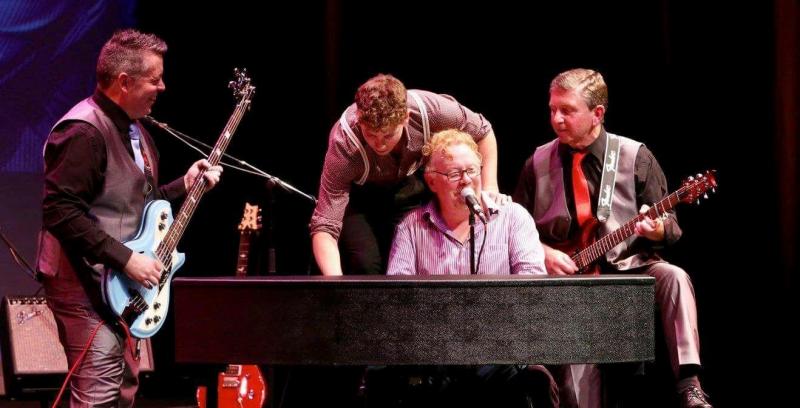 In truth, David Barton’s voice has a different vocal colour, occupies a different register, one closer to that of, say, Buddy Holly, many of whose songs he covered. Whilst the other man stayed true to Jerry Lee, Barton did the rest. Looking every inch the 1950’s pin-up Rock’n’Roller, lithe, handsome, follically unchallenged, he reeled off polished tributes to Ray Charles, Elvis, Chuck Berry, Fats Domino and the Big Bopper. (The publicity flyer mentioned the Everly Brothers but I don’t recall any.)

The two men, both from Hull, tended to alternate with each other, one taking the lead vocal, the other singing a harmony. They loved their jobs, inspired each other, worked in tandem and against each other, sparked each other, cajoled and challenged each other, in a way not unlike the manner boogie pioneers Albert Ammons and Meade Lux Lewis would occasionally pair up as a duelling duo.


Also by Andrew Liddle...
Jazz Album: Hot Lips Page: A Retrospective PerspectiveThe Haworth Home Guard Is Gearing Up For ActionThree Billboards Outside Tin Brook, StockportDoors Opening For The Georgian Theatre RoyalAnd Then There Were Two
So, it was non-stop electrifying Rock’n’Roll all the way except for a glorious interlude where they found themselves playing straight, snatches of everything from Beethoven to Rachmaninov, just for the hell of it, just because they could and seemingly wanted to playfully out-bravura each other. You might call it comic relief, uncamp Liberace, but it made a serious point about their all-round technical ability.

They were backed by a wonderful band of bass and lead guitarists, drummer and female vocalist, all of whom deserve to be mentioned and would have been had the announcement of their names been audible over their playing or had they been referenced on the internet.

One of the great pleasures of the evening was to be able to see the two keyboards, watch the well-remembered licks and riffs, the turnarounds, the runs, the scoops, the zips, in close-up, projected from overhead cameras on to a back screen. Even in a mesmeric blur of fingers was proof that the Killer’s style requires an enormous technical skill, something quite unsuspected by those crass individuals who dismissed it as ‘only Rock’n’Roll’. The Killer didn’t care, knew his own worth and rocks on in his eighty-third year, almost the last man standing - or rather sitting - from that preciously talented generation of greats, Elvis, Fats Domino, Buddy Holly, Gene Vincent, Chuck Berry, Eddie Cochran, Roy Orbison, Carl Perkins et al. Who would have thought that the two wildest and most self-consuming, Jerry Lee and Little Richard, would be the ones who lived on? Life is strange like that. Spo-dee-odee!

The audience loved Dave Barton and Al Kilvo. It may have been two days shy of Bonfire Night, but we well and truly had our fireworks. Jerry Lee Lewis had that unfortunate well-publicised spell of disapprobation but never went away, reinvented himself and lived on. Clearly he’s going to rock on a very long time, kept alive by 28-year- old Dave Barton and a slightly more mature Al Kilvo, the boogie boys born a long way from Ferriday, Louisiana, where Jerry Lee hailed from or Sam Phillips’ Sun Studio, Memphis, where Rock’n’Roll first burst forth.

Two Pianos - Rock’n’Roll Experience was at the East Riding Theatre, Beverley, on the 3rd of November.