UK light commercial vehicle (LCV) registrations declined to 21,597 units in April, down -29.1% year-on-year, according to the latest figures published by the Society of Motor Manufacturers and Traders (SMMT).

While the decline in registrations in April is amplified by comparison with 2021, which saw the highest total for the month since records began, this year was still -12.2% below pre-pandemic 2019.1 Despite demand being strong across all segments, supply chain pressures locally and globally, including shortages of semiconductors, hampered deliveries. 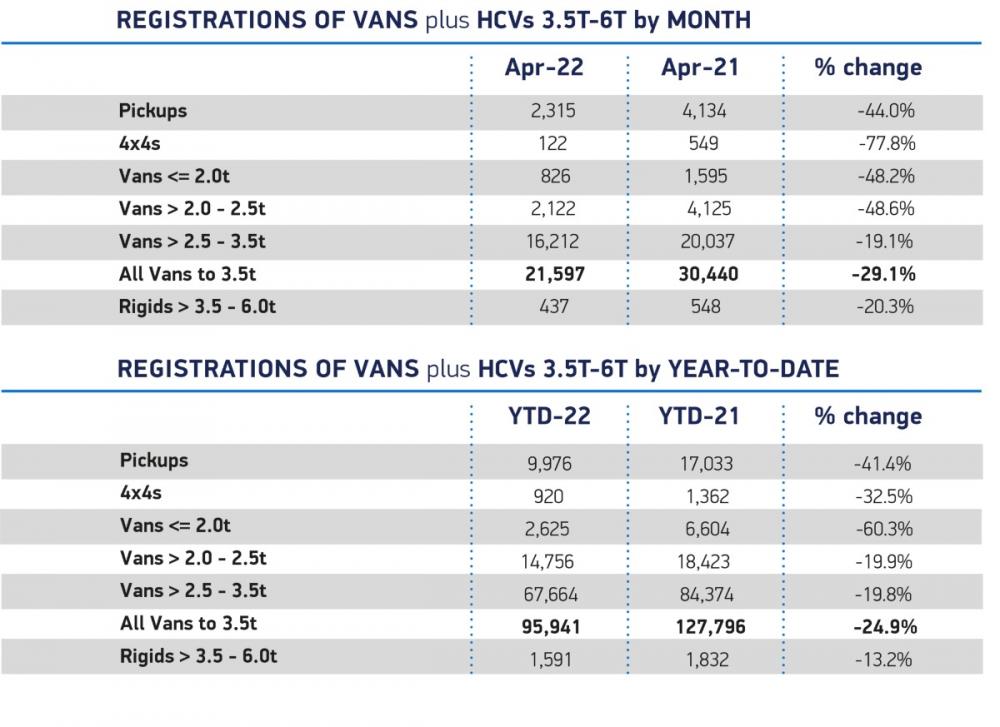 Newly registered large vans, which comprise more than two thirds of the LCV market, totalled 16,212 units, down -19.1% compared with a year ago, as the segment’s market share increased by nine percentage points to 75.1%. This is due in part to more significant declines in registrations of medium-sized vans – those weighing greater than 2.0 tonnes to 2.5 tonnes – by -48.6%, and small vans – weighing equal to or less than two tonnes – by -48.2%, as components shortages restricted supply. Sales of pickups, meanwhile, declined by -44.0%, while 4×4 registrations dropped by 77.8%. 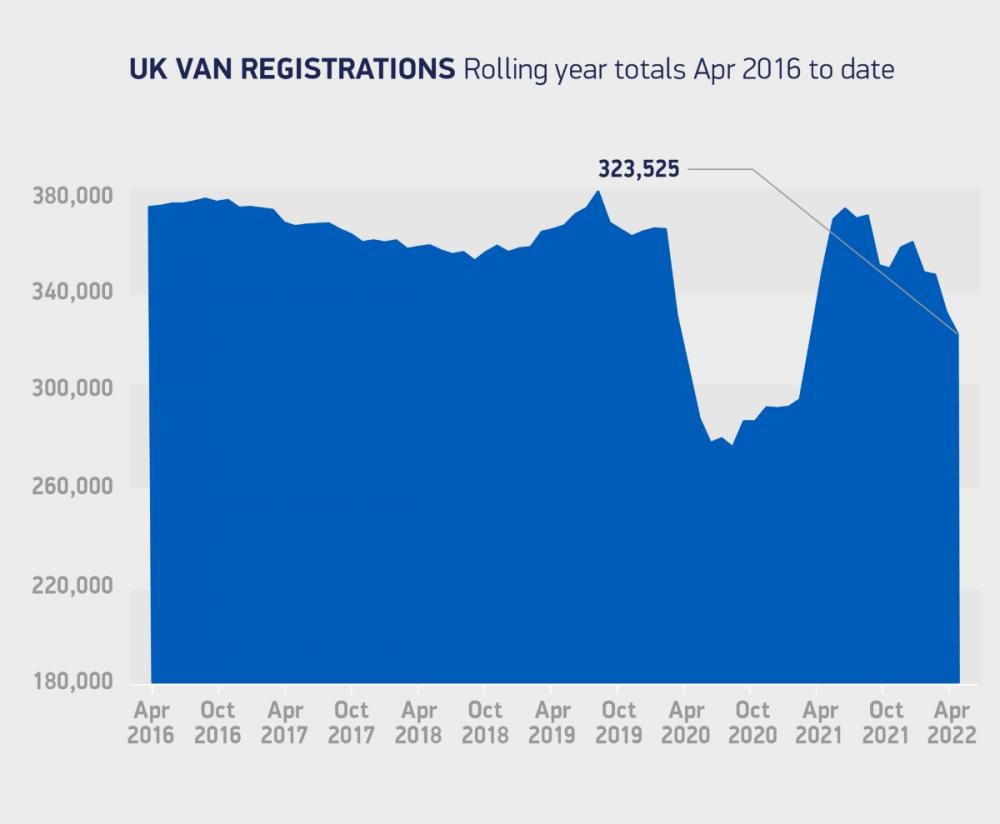 As manufacturers continue to invest in and bring new electric van models to the market, registrations of these vehicles increased by 52.7% year-on-year to 919 units – representing one in 24 new vans joining the road. While electric LCV uptake continues to grow, the market is some way behind passenger cars in transitioning to electric, so policies that incentivise operators to make the switch will be essential to meet ambitious decarbonisation targets. 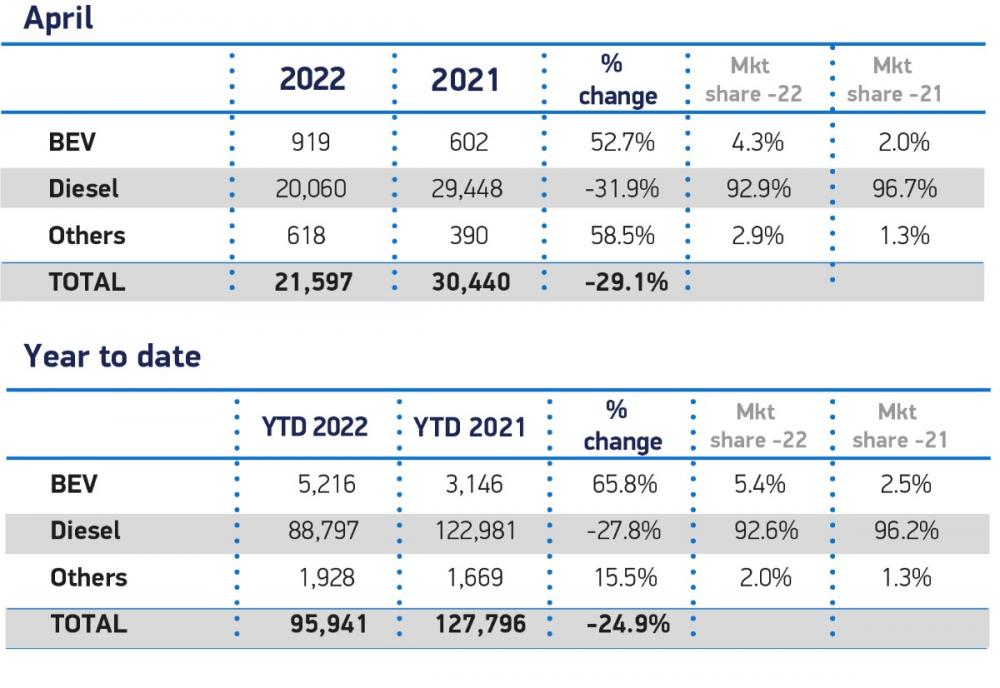 "Despite the global supply pressures on the UK’s light commercial vehicle sector, manufacturers are prioritising the most popular models, while investing in electric options where demand is slowly but steadily growing. Constrained supply, however, does mean that 2022’s new van market is expected to be down on last year’s bumper uptake.

Even so, while market conditions remain challenging for van operators across the UK, now is the time for those looking to renew their fleets to put their orders in, as interest rates remain historically low and an increasing range of fuel efficient and electrified models are now available."

“Total new car sales in April fell by -15.8% compared with the same time last year. While fleet sales have been declining, private sales have continued to perform relatively well, up by 5% this month even against the backdrop of a cost of living crisis. The squeeze on consumer pockets has seen many households delay major purchases in an effort to save money. However, a divergence in consumer spending patterns is emerging; those with higher disposable incomes and savings accumulated over lockdown are still able to spend on new vehicles.

“Although the sector continues to adapt to supply chain challenges – including the ongoing semi-conductor shortage – lead times are less of an issue this month for private sales as many dealers have been able to rely on stock ordered last year.

“The cost of owning a car is rising, perpetuated by record-high fuel prices at the pumps. For those who lease their vehicles, car repayments already make up a major proportion of many consumers’ household bills.

“The automotive sector must brace for a further fall in demand with just 5% of consumers planning to purchase a car this quarter; a fall from 7% in Q4 2021. This decline will have wider-reaching implications for the sector as it could signify an end to the pent-up demand that was built up during the pandemic.

“Despite the ongoing challenges faced by the industry, sales of electric vehicles continue to perform above expectations, with battery electric vehicles sales growing by 11% in April. Combined BEV and PHEV sales have accounted for a fifth - 21% - of all new car purchases in the year so far, compared with 14% in the same period last year.

“Some of this growth is directly attributed to a shift in consumer behaviour, with many dealers reporting greater BEV enquiries as the cost of fuel has skyrocketed. With prices unlikely to fall any time soon, we could see faster-than-expected take up of electric vehicles this year.

“April also saw the announcement of a consultation outlining the design of a zero-emission vehicle mandate, which would require manufacturers to sell a certain proportion of BEVs every year in the run up to 2030. Failure to meet targets could result in fines. This is another major step forwards on the path to an all-electric future and should speed up EV targets. As we get increasing clarity on emissions targets for OEMs, we could see them prioritise the sale of BEVs over other vehicle types.”