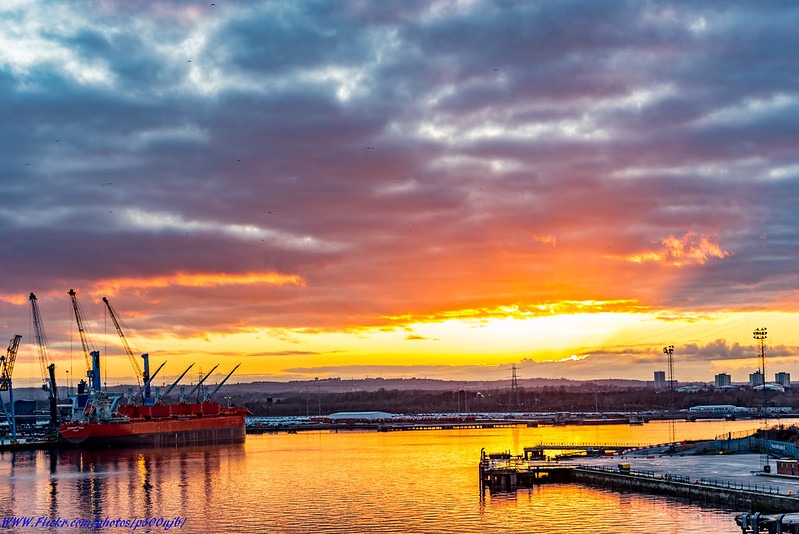 Port of Tyne Photo: Rab Lawrence / Flickr
Delivering economic growth in every place in the UK will be the determining factor in the success or failure of the Government’s Levelling Up agenda. The route to achieving that will be by creating – or building on – clusters of economic activity in different parts of the country.

That’s what Tony Danker, the CBI Director-General, will say in a speech to a business audience at the Port of Tyne in South Shields (Monday) – to kick off the CBI’s three-day Annual Conference, with strategic sponsors Accenture and Hays. This year’s conference is taking place over eight locations across the country. He will say that ‘growth in turn provides better paid jobs, skilled work, firm-level success and creates the kind of virtuous circle that helps a place to prosper’.

Mr Danker will argue that the country has had to live with the consequences of ‘offering little more than benign neglect for what got left behind as we chased an economic policy that was ambivalent about levelling down’. With the most productive parts of a sector, such as HQs, too often based in London and the South East, the UK is operating as a ‘branch line economy’.

He will go on to say that neither the Government nor business can solve this alone and requires partnership to make it reality.

The CBI has identified four key elements that are required to lift productivity in a given place and allow more areas to prosper: High-value sectors; High-value firms; High-value skills; and higher business investment.

Mr Danker will also use his speech to announce the creation of the CBI Centre for Thriving Regions to act as a vehicle for the private sector to engage in ‘genuine economic placemaking’.


The CBI Centre for Thriving Regions will:

Launch two demonstrator pilots to build on the economic cluster model
Write a Levelling-Up Playbook to serve as the ‘go to bible’ for how to get high quality industries, firms and jobs in all regions of the UK.
Install a new Director and be staffed from all nations and regions of the UK. It will have a Steerco of leading local, national and multinational businesses and universities or colleges. It will draw on the input and ideas of the CBI’s 800 strong regional council network.

Tony Danker
The CBI believes that bringing these elements together under economic clusters – an idea adopted successfully around the world – where businesses co-locate to an area for mutual benefit will make all important contributions to levelling up.

On Levelling Up, Tony will say:

“The Levelling Up agenda is one we share wholeheartedly with the Government. Billed so far, it’s a lot about politics and public services. City mayors or County mayors. Pride in places and better spaces. It all matters. Business cares about these things. But on those issues the politicians lead.

“Ultimately, what the UK needs to level up, however, is economic growth in every place. Growth that in turn provides better paid jobs, skilled work, firm-level success and creates the kind of virtuous circle that helps a place to prosper.

“So, let’s talk about money. Let’s talk about industry. Every place has an industry they’re famous for. Textiles in Lancashire. Shipbuilding on the Clyde. Steel in Sheffield. Sources of competitive advantage that made them prosperous. Where people learnt a trade and forged a career.

“But the truth is that the UK suffered from de-industrialisation. Since the 1980s, we let old industries die – offering little more than benign neglect for what got left behind – it was an economic policy that was ambivalent about levelling down; Too relaxed about a brain drain as young people leave home to chase better paid jobs. Wages higher on average in the South than the North. Multi-national corporations located overwhelmingly in the South East where new industries thrived. Shuttered high streets in towns and cities left behind. A loss of pride in place.

“We’ve spent the past decades living with these consequences. But now, we’ve got a shot at redemption, a chance to regenerate with nascent industries – such as biotech, space, and cybersecurity – emerging in all parts of the country.

“Even more with net zero, which creates a once in a generation opportunity for the UK’s industrial heartlands to lead in this new industrial revolution as they did the last. In hydrogen. Off-shore wind. Carbon Capture. Electric Vehicles and batteries, and other net-zero solutions. A chance for these places to be world-leading again. If this isn’t levelling up, I don’t know what is.

“But it won’t happen on its own – that’s what we now know. This might be a new line from the head of the CBI, but simply saying the market will fix this is not good enough. There are free marketeers in the debate who say Government should never play an active role like this. But I don’t know a country in the world – including, and indeed especially, the United States – where governments aren’t active in economic geography. Governments don’t create jobs and wealth. Businesses do. But businesses alone don’t make places better. That’s on all of us”.


On the four key levers to succeed, Tony will say:

“There is a clear correlation between high-productivity sectors in a place and the economic outcomes for local people. Lots of places have them. Just down the road in Sunderland, for example, where productivity is 3% higher than the UK average, fuelled by its world-class automotive sector, a major source of high-quality jobs in the region.

“But even when it appears that a place has a high-value sector presence, look more closely. What you’ll see is that – within some UK regions – even the most productive areas remain stubbornly below the national average.

“The truth is that in too many sectors, the UK now feels like a branch line economy. With the most productive parts of a sector, such as HQs, too often based in London and the South East, and the branch managers and the back-office based everywhere else.

“Instead of a branch-line economy – what we want is an economy of many hubs. That means using all parts of the country to their full potential. In a multi-hub economy, clean energy headquarters in the North East call up Edinburgh and London to arrange finance. And London companies like TfL call up Yorkshire, Ballymena and Falkirk for green buses.”.

“We know the transformational impact a successful company can have on the local people and communities that surround it.

“A local start up made good. A “relocator” that plants new seeds. An overseas investor which commits to Britain. Or a UK firm that has been a regional leader for decades.

“Be they home-grown or international, established or emerging, high-value firms like these are the job-creators, the skills-builders, the innovators – a catalyst for growth in our local economies”.

“When skills rise, so does economic growth. And that golden thread between skills and productivity only becomes more important over time.

“In parts of central London, such as Wandsworth, Camden and the City, around three quarters of workers are educated to at least degree level. That’s a big part of the explanation why London has the highest productivity of anywhere in the UK. It’s a similar story elsewhere, with other prosperous places, such as Edinburgh, Bristol, Brighton and Hove having relatively high graduate shares too.

“But many of our other major city-regions have traditionally lagged behind – like Leeds, Birmingham, Manchester and Glasgow, despite being home to some of the UK’s leading universities.

“And we can guess why that might be – better prospects elsewhere. All of this, in turn, exacerbates local skills shortages. It’s an age-old problem, but it’s one we must crack if we’re to level up”.

“But investment and productivity are interlinked. For example, recent research* found that over time, a persistent 1% increase in the level of capital per worker – that’s the amount of capital invested in the stuff that helps someone do their job, such as machinery, IT, buildings, etc – leads to labour productivity growth of 0.6% across the whole economy. And in manufacturing, the impact is closer to 0.7%.

“CBI analysis of this data found that, over the past five years, while some regions have seen double-digit growth in capital per worker, it’s stagnated in many industrialised areas in the North of England and Midlands. This includes Derbyshire and Nottinghamshire, West Yorkshire, Greater Manchester and Merseyside.

“Business investment is something that needs tackling locally, but nationally too. That’s about tax and markets. And about regulation too, which we need to think about more holistically. We need UK regulators to pioneer pro-investment and pro-innovation regulation, alongside competition and consumer price. That’s the way we use post-Brexit freedoms to unlock growth”.

On economic clusters, Tony will say:

“It’s only when they [the four levers] happen in tandem that this works. For us, the answer is a clusters approach. Where you get a concentration of firms co-located. They compete, but also collaborate. They have the same skills needs. And supply needs. Their ideas and innovations spur each other on.

“It becomes an ecosystem, made up of start-ups and anchor institutions, colleges and universities. Thus, flows skills and expertise in turn generating innovation and ideas. Surprise, surprise – then finance, legal and professional services show up. And soon, adjacent sectors come to town.

“It’s not a new idea. We know London did it in finance; Aberdeen in oil and gas; Cambridge in science. It’s also enabling South Wales to emerge as a player in the world’s compound semiconductor market, which is projected to grow to over $300bn by 2030. In the US, it’s cemented Massachusetts’ reputation as a global leader in biotech innovation. And, in Germany, it’s helped Hamburg to become a world-leading civil aviation hub.

“And where it works, it’s rarely public-sector push, it’s private-sector pull. So, at the CBI, we want to help. Yes, levelling up should be led by a local mayor or government. But a business plan for a place has to be a plan with businesses in it. Committed, invested – in every sense – and showing up to play.

“So today I can announce that the CBI will establish a new Centre for Thriving Regions to coordinate the private sector’s commitment to levelling up. And it will crack one of Government’s biggest questions – how to bring private sector leadership to a place. Businesspeople want to play that role.

“But to date most of the asks are for committees that oversee public funds. I’d change the ask. Ask businesses to do fundamental economic strategy for regions – as often our best Mayors do. Or be a genuine decision-maker on specific deliverables that make a difference – a university hub, a new logistics centre, a thriving regional airport.

“I have spoken to companies far and wide who want us to do this work. Who want to ensure that we throw the full weight of private sector involvement, ingenuity, and investment behind a shared mission to level-up the country.”