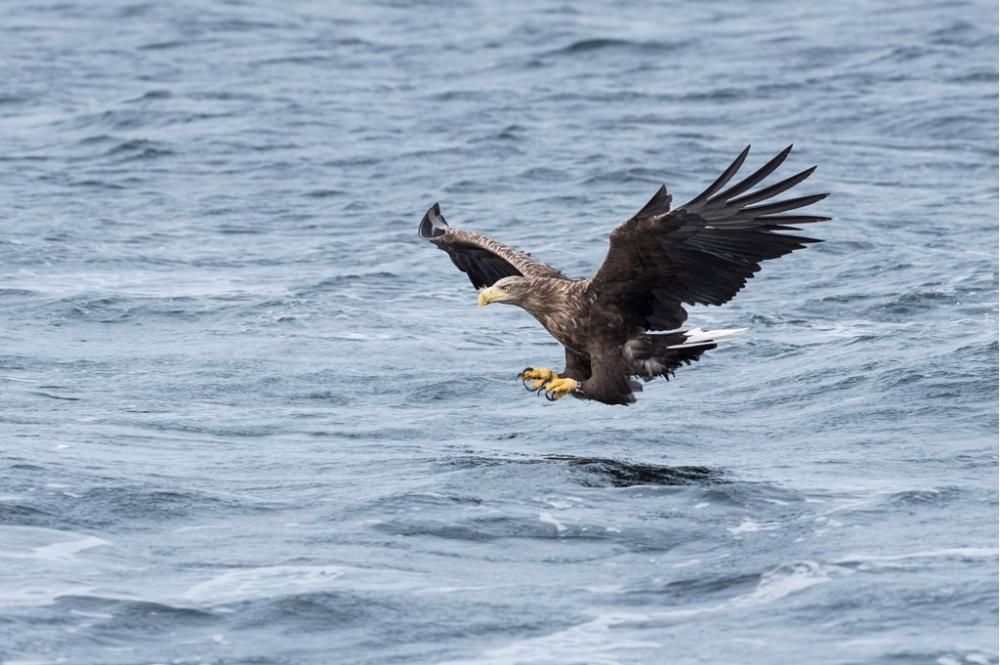 Volunteers on the nature reserve’s viewing platforms were amazed to see not one but two white-tailed eagles, the UK’s largest birds of prey, soaring over the sea.

These giants of the sky have a massive wingspan of around 2.4metres (approx 8 feet - the same size at the height of football goal crossbar from the ground) and are widely known to birdwatchers as the ‘flying barn-door’ of the bird world. They feed mainly on fish, so they are also known as sea eagles.

Volunteer, Linda MacKenzie, witnessed the fly past: “I couldn’t quite believe it – it was so exciting to see these two majestic birds but trying to keep track of both was tricky. I didn’t catch sight of the black-browed albatross that visited the cliffs last year, however this was almost as good”.

Once widespread across our isles, white-tailed eagles were wiped out in the early 20th Century due to illegal killing. The last British bird was shot in Shetland in 1918.

The RSPB became involved in a long-term plan to re-introduce the species in Scotland in the mid 1970s and initially a number of young Norwegian birds were released on Rum, in the Inner Hebrides.

Over the years, further releases took place and there are now thought to be around 40 pairs north of the border.

However, the species remains on the endangered Red List as it is slow to breed.

In England, white-tailed eagles have also been released by the Roy Dennis Foundation in the Isle of Wight, where populations have been increasing thanks to protective measures being put in place.

Younger birds often explore before settling in an area. Research data from satellite tags has shown that juveniles can travel widely in their first three or four years. In 2020, white-tailed eagles released on the Isle of Wight by the Roy Dennis Foundation spent time in the North Yorkshire Moors.

In Gaelic, this eagle’s name means ‘the eagle with the sun-lit eye’ – and it does indeed have a light gold or amber iris. It also has a pale head, distinctive white tail feathers and long, broad wings with ‘fingered’ feathers.

So, keep looking seawards and the eagle-eyed may be fortunate enough to spot one.