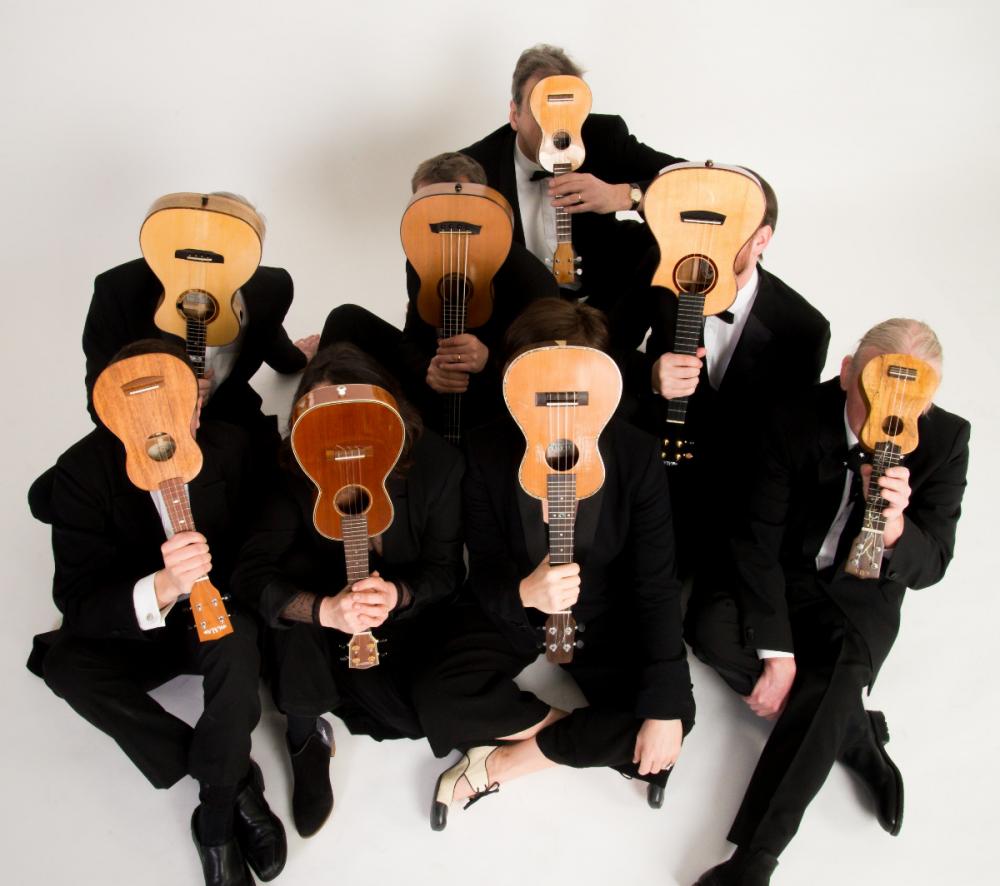 Has Panto season come early? No, it's the Ukulele Orchestra of Great Britain who graced the stage at York's Theatre Royal last night to a rapturous reception from the locals. And we were treated to a new joke! Yes, the band had clearly not wasted their lockdowns.

To those unfamiliar with the Orchestra, they are a blend of serious musical attainment and utter frivolousness that is hard to find elsewhere, with performances and chats delivered in a dead-pan style that makes Paul Merton or Jack Dee look like giggling schoolboys.

The audience are very much a part of a Ukulele Orchestra concert and t-shirts printed with slogans like "I play ukulele because I like it, not because I’m good at it" or "Ukulele: the thinking man's violin" were everywhere. The band would have been justified in wearing a "it's hard to be humble when you play Ukulele like me" t-shirt, but they refrained, settling as always for more formal attire.

"What kind of Ukulele do you play?" the lady behind me asked of a complete stranger. The reply contained a list: "Tenor, Soprano, Baritone - mostly". The casual nature of the question, with its in-build assumptions, the comprehensive shorthand answer and the complete understanding of the response tells you much about the fan-base and loyal support the Orchestra enjoys. These are not casual observers but active participants in the occasion. The band are in fact rock stars of the Ukulele world - and that's not a phrase that could have been written a few years ago.

From a lightening fast Theme to Dick Barton, via Punk Rock, Country & Western, Sea Shanties and Blues, the Orchestra cover many of the musical bases. Audience favourites: ac/dc's Highway to Hell , Grace Jones' Slave To The Rhythm, and American rock band Wheatus' classic I'm just a teenage dirtbag baby were all included.

Can you imagine eight serious looking musicians, dressed formally, playing a comprehensive collection of ukuleles and singing with great gusto -

- welcome to the surreal world of the Ukulele Orchestra of Great Britain.

The Panto had not arrived early to York's delightful Theatre Royal, but with jokes suitable for a either occasion this made for a delightful evening. It was good wholesome fun for all the family - especially the many rabid uke fanatics in the audience (of which, I count myself one).
Also by Richard Trinder...
Mikron Theatre's Wild And Wonderful World Of WeatherJames Webb Telescope Marks A New Dawn For HumanityCOPulation!Lobbyists Pollute COP26News So Far From The COP End