One week after this year’s exciting and highly unpredictable opening Formula 1 race in Bahrain, today it was the turn of Saudi Arabia to host the second Grand Prix of the season and this time it was Red Bull’s Max Verstappen who just held off Ferrari’s Charles Leclerc for the victory spoils, with the outcome only decided on the sprint from the final corner to the chequered flag. As outlined within my report below, the weekend had been threatened by a Yemeni missile attack on a nearby oil depot on Friday, but it proceeded as planned after detailed discussions were held about the security and safety of all at the Jeddah circuit and a potential drivers boycott was averted. 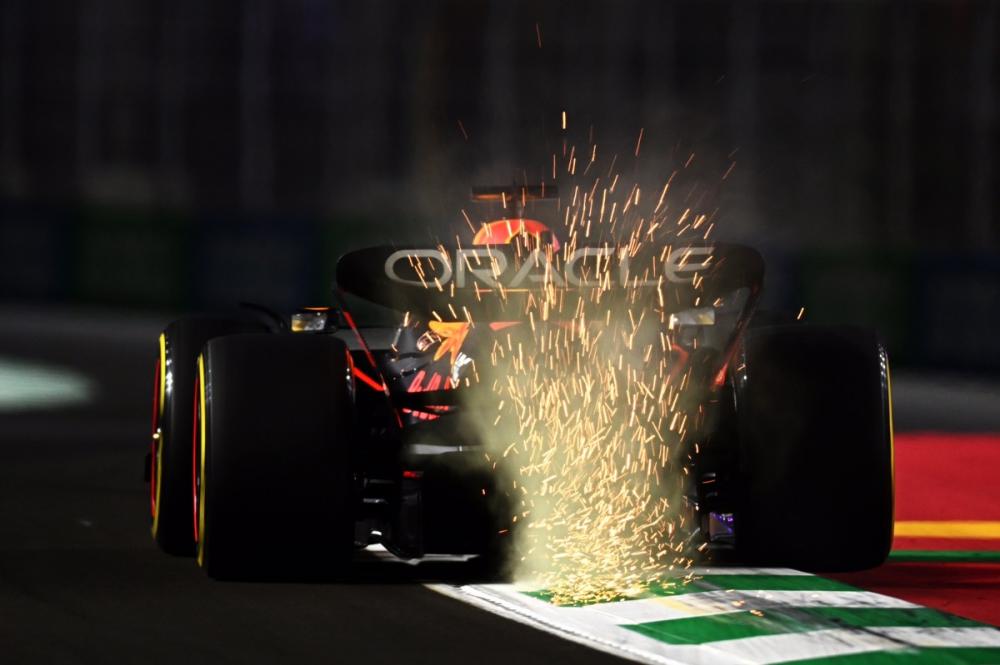 Sparks fill the night air as Max Verstappen flies by on his way to victory
The Red Bull team had been desperate for a better result after its shock double retirement last weekend when both of its drivers suffered late technical failures just as they had looked set to finish second and fourth, handing a welcome 1-2 finish to Ferrari. Mercedes had benefited too from Red Bull’s woes with unexpected third and fourth place results for Sir Lewis Hamilton and George Russell, but Red Bull was confident that it had found a solution to its fuel system vacuum problems.

The opening race had been a difficult one for Aston Martin, as it had also been for McLaren, and both teams had arrived in Jeddah hoping for better performances.
Saudi Arabia’s Jeddah Corniche circuit had held its first ever Formula 1 race last December, but the Grand Prix featured two sets of red flag stoppages and four Virtual Safety Car interventions. The track attracted criticism from drivers due to the various high speed blind corners which very much represented an increased safety risk and, as a result, at several of its many corners the barriers have been moved back and/or given a smoother front, improving sight lines for the drivers. The final Turn 27 has also been widened to 12 metres. The Race Director Niels Wittich indicated that a maximum in-lap time would be advised after practice, thereby ensuring that drivers did not go too slowly when returning to the pits during qualifying and risk impeding those on a hot lap, and, looking ahead to the race, the main overtaking opportunity would still clearly be the blast from the final corner to Turn 1.

Having had to miss the whole of the Bahrain Grand Prix weekend after testing positive for Covid whilst at home in Switzerland following the final pre-season test, Aston Martin’s four time champion Seb Vettel also had to miss the Jeddah round, but the German is hopeful of starting his season in Australia. This left the team having to again call upon the services of their experienced reserve driver Nico Hülkenberg. Knowing that he might be needed again this weekend, he had flown to the UK straight after the race in Bahrain last Sunday to spend time in the team’s simulator at its Silverstone base getting to know the Jeddah circuit before then returning to the Middle East.

The opening race had been a difficult one for Aston Martin, as it had also been for McLaren, and both teams had arrived in Jeddah hoping for better performances. In contrast, the Haas team had rightly been over the proverbial moon with their fifth and 11th place finishes for Kevin Magnussen and Mick Schumacher respectively in Bahrain and was looking forward to proving that the clear improvement in their fortunes compared to last season was a trend and not a one-off. 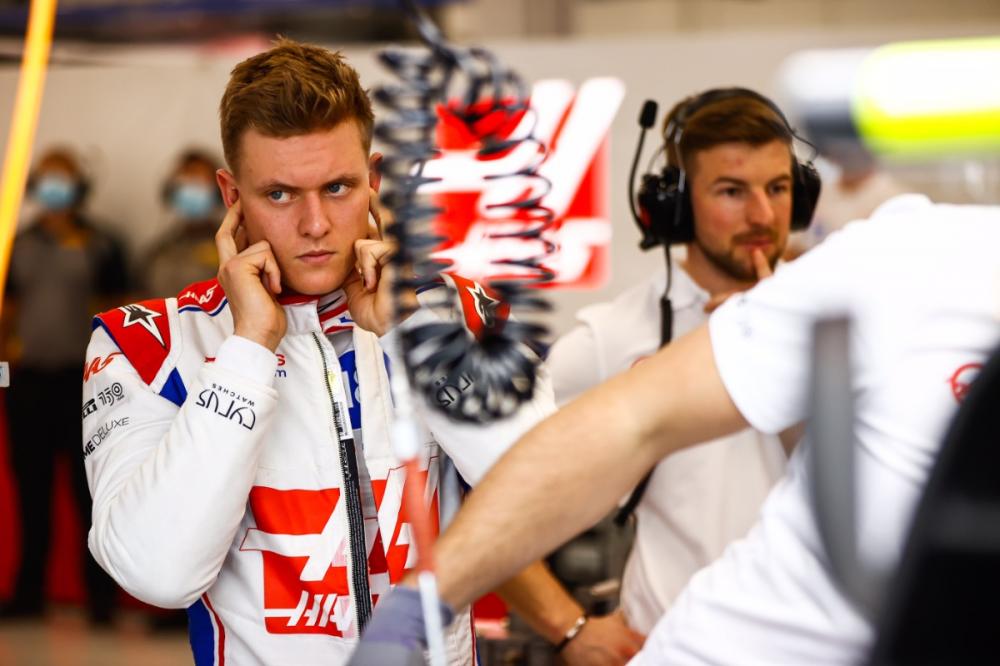 Mick Schumacher in the Haas pit garages yesterday before suffering an accident which resulted in a hospital visit
Last Thursday Britain’s 19 year old Abbi Pulling, who competes in the all-female W Series singleseater championship, and Saudi Arabia’s Aseel Al Hamad, who represents her country on the FIA Women in Motorsport Commission and is a board member of the Saudi motorsport federation, became the first women to drive a Formula 1 car in the latter’s home country as part of a demonstration held by Alpine. Both drivers were thrilled to get behind the wheel of a 2012 V8 Lotus E20 and Al Hamad enthused “It was beautiful to drive with Alpine and even more special to do this in my home country of Saudi Arabia. I hope this inspires more generations to fall in love with F1 and for more women to consider motorsport as a future career.”

Turning away from Jeddah for a moment, Netflix launched its Formula 1 based Drive to Survive annual documentary series back in 2019 and it certainly helped to attract many new viewers to the sport. However, after the recent release of the series of programmes covering last season it has understandably come under fire from fans, drivers and the media for at times distorting the truth and trying to suggest certain driver rivalries exist when in reality they don’t. As a result, the F1 authorities are intending to hold discussions with Netflix and the drivers to ensure that this increasingly negative over-dramatisation is stopped before it does more damage. Verstappen had already refused to contribute to Netflix filming last season due to what he saw as clear falsehoods being perpetrated about himself and McLaren’s Lando Norris and there is a real desire for this trend to not spread to include other drivers who have also criticised the accuracy and quality of the Netflix coverage.

The young German driver was fortunately declared uninjured, but his team opted for him not to race today as it feared any rushed repairs to his badly damaged car might compromise their performance at the next Grand Prix weekend.
After the cars had headed out onto the Saudi Arabian track for Friday morning’s opening free practice session it proved to be Leclerc who topped the timesheets ahead of Verstappen, Alfa Romeo’s Valtteri Bottas and the other Ferrari pedalled by Carlos Sainz. Hamilton and Russell were only ninth and 15th fastest respectively, but had been experimenting with alternative front wings as they sought to improve their new car.

High drama followed when both Alonso and Ricciardo ground to a halt near the pit lane entry...
The start of the later second practice period was delayed by 15 minutes as F1 CEO Stefano Domenicali called an emergency meeting of all team principals and drivers to provide an update on the missile attack and resultant explosions at an Aramco oil facility just nine miles from the circuit, which had happened during first practice. The Italian made it clear that this weekend’s event would still proceed as planned, a decision which was unanimously supported by every team principal. However, the drivers held their own meeting on Friday evening to discuss their concerns, a gathering which lasted for four hours and only ended early on Saturday morning. They later called for more discussions to be held about whether F1 should return in future years because of the track’s dangers and wider safety issues. The timing of the attack was significant with Saudi Arabia and its questionable human rights record being under the international sporting spotlight this weekend due to F1’s visit and with Aramco being heavily involved as a major sponsor of the sport. A Yemeni body called the Houhtis claimed responsibility for this and other recent attacks, declaring that they would continue until they have achieved their ambitions for their country. 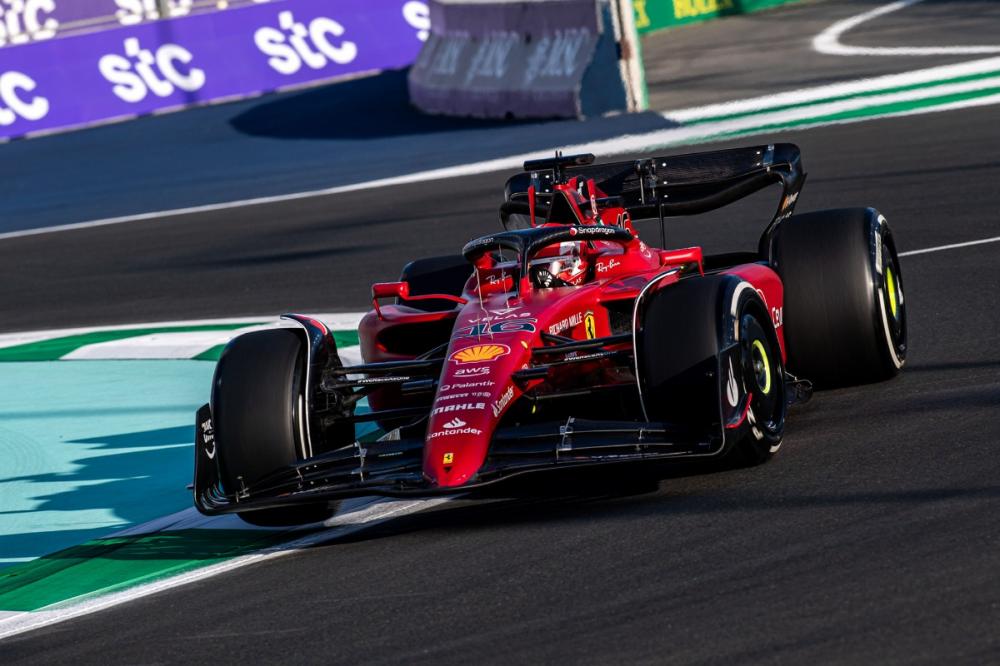 Ferrari’s Charles Leclerc ultimately had to settle for second place
During the delayed practice session contact with the wallls for the Ferrari duo ended their participation prematurely, but Leclerc and Verstappen were again quickest ahead of Sainz and Red Bull’s Sergio Pérez. Subsequently Leclerc and Verstappen were again out front, with Pérez this time edging third from Sainz in yesterday’s final practice. The following qualifying process began at 20.00 local time (17.00 back in the UK) and was soon interrupted by red flags after Nicholas Latifi had put his Williams car into the barriers at Turn 13. Worse was to follow when Schumacher suffered a heftier shunt into the walls at Turn 10 and, after a lengthy extraction period, was examined at the circuit’s medical centre before being helicoptered to the nearby King Fahad Armed Forces Hospital for further checks. The young German driver was fortunately declared uninjured, but his team opted for him not to race today as it feared any rushed repairs to his badly damaged car might compromise their performance at the next Grand Prix weekend. Daniel Ricciardo earned himself a three place grid penalty for impeding Esteban Ocon’s Alpine and the Australian’s McLaren outfit also received a 10,000 Euro fine for not warning their driver of the Frenchman’s approach.

So, as today’s 20.00 start time neared we had the intriguing prospect of both Ferraris being sandwiched by the Red Bulls on the first two rows of the grid, with Ocon and Russell just behind them. When those famous red lights went out we had a clean start and Pérez led from Leclerc as Verstappen quickly got the better of Sainz round the outside at Turn 2. As the race settled, Russell moved past Ocon to fifth at the final corner on the third tour and soon we were all thoroughly entertained by a brilliant and at times oh so close battle between the two Alpines, with Fernando Alonso emerging on top. 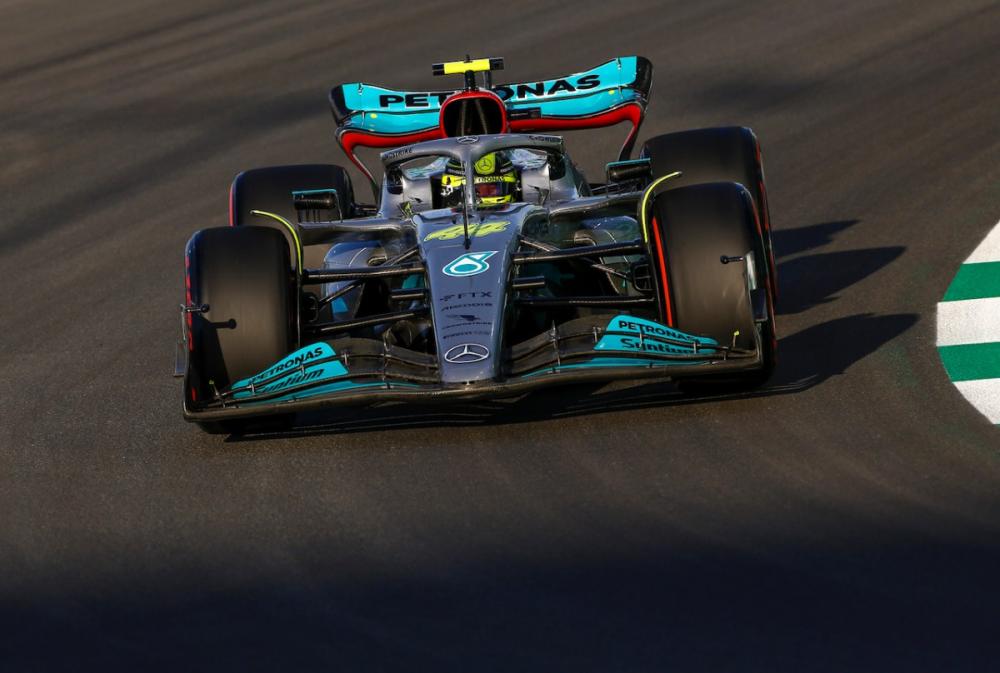 Lewis Hamilton qualified a lowly 16th and finished 10th, five places behind his new team-mate George Russell
On lap 15 Red Bull brought the still leading Pérez into the pits to change from medium to hard compound tyres, but the Mexican was soon to suffer as Latifi crashed into the barriers at the last corner, causing a Virtual Safety Car period followed by a full Safety Car intervention. Red Bull and Ferrari quickly responded by calling in Verstappen, Leclerc and Sainz for hard tyres and the net result after the Safety Car had left the circuit was that Leclerc, Verstappen and Sainz now led fourth placed Pérez, with Russell and Magnussen in their wake. Hamilton soon claimed sixth position from Magnussen, but still had to make a pit stop and knew this would drop him back down the order later.

High drama followed when both Alonso and Ricciardo ground to a halt near the pit lane entry, with the latter soon closed for safety reasons and another VSC application reducing the pace temporarily. When the pit lane was reopened Hamilton made his stop with just nine laps remaining and rejoined down in 12th position.

From here to the chequered flag we had a superb battle for the victory honours between Leclerc and Verstappen as they exchanged positions, both looking to gain the maximum advantage from the DRS benefit available down the main straight if you played your cards right at the detection line just before the final corner. In the end it was Verstappen who got ahead and managed to remain so after a hard but clean fight between two drivers who very much respect each other and Ferrari’s young Monégasque star at least claimed the extra point for the fastest lap of the race. Sainz completed the podium trio, leaving Pérez, Russell and Ocon to make up the top sextet of finishers as Hamilton ultimately picked up a single point for 10th place. 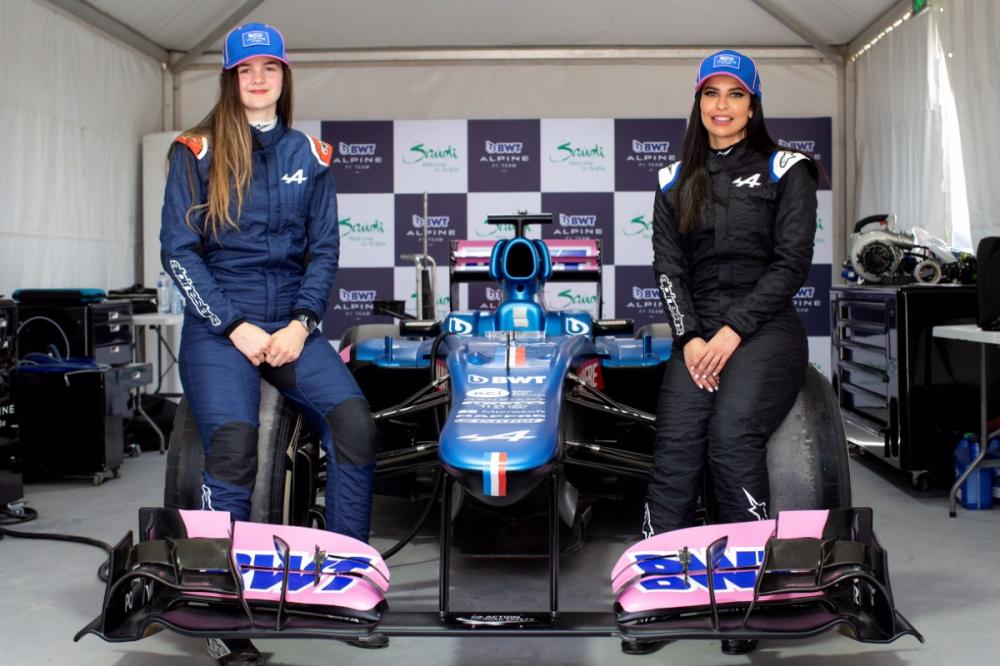 Last week Abbi Pulling (left) and Aseel Al Hamad became the first women to drive an F1 car in Saudi Arabia
When the dust had settled in Saudi Arabia it was time for all the teams to regroup back at their respective European HQs before heading off for the first longhaul race of the year in Melbourne, Australia in two weeks’ time. Due to the pandemic the Albert Park circuit had last held a Formula 1 Grand Prix back in March 2019, but it’s always a highly popular destination for the F1 circus despite the travel distances involved and, with various improvements having been made to the track recently, there’s already plenty of additional optimism about this year’s forthcoming return.