Verstappen Victorious After An Absolute Thriller In Brazil 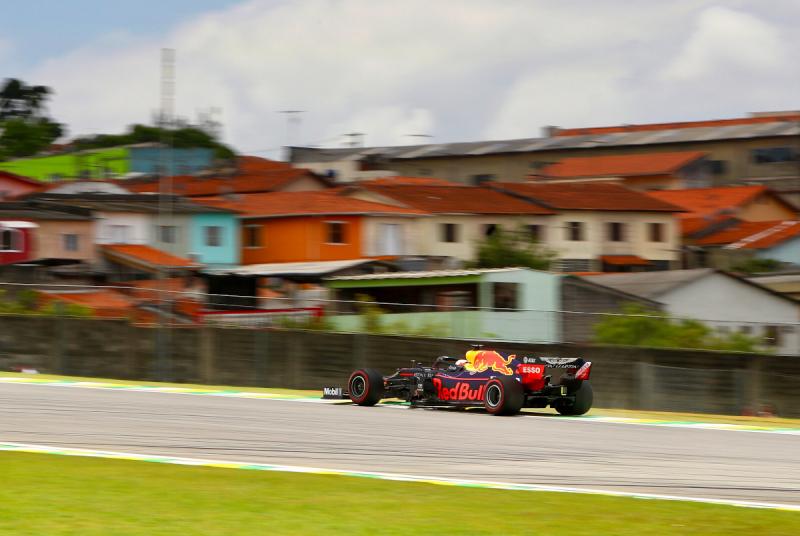 Verstappen flies around Interlagos en route to victory
With both 2019 titles already wrapped up again by Mercedes for a sixth year in a row the atmosphere in the Formula 1 paddock prior to this weekend’s Brazilian Grand Prix was relatively subdued, but after an incident and drama laden race Max Verstappen emerged victorious for Red Bull.

Mercedes team principal Toto Wolff had chosen to stay away, remaining back in Europe to get on with other key business such as the impact of the new regulations for 2021 onwards and whether the Daimler parent company will keep the team in F1.

Elsewhere, there was worrying news for Dutch fans as Liberty Media (Formula 1’s owner) confirmed that there were concerns as to whether the Zandvoort circuit would be ready for the scheduled and long awaited return of F1 next May due to environmental issues and that an undisclosed plan B was being formulated, just in case. 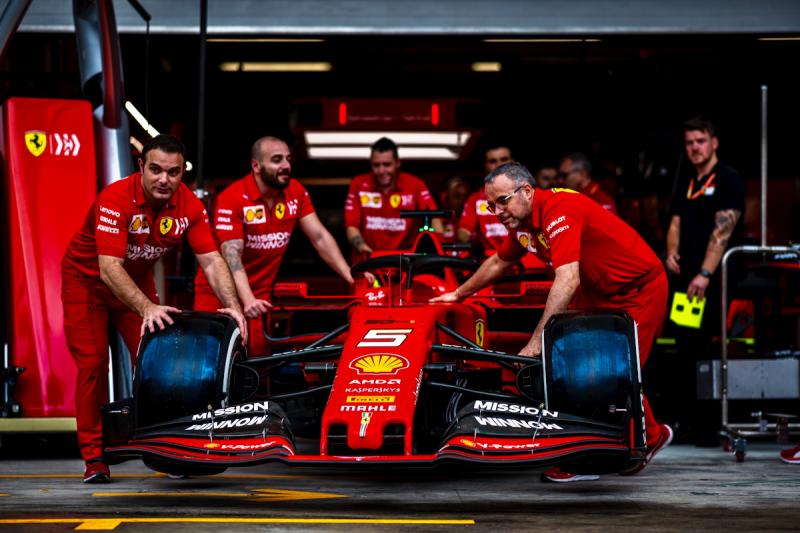 Vettel’s pristine Ferrari before both red cars from Italy collided and retired
There was far better news though for British/Thai driver Alex Albon during the build-up to the São Paulo event as the Red Bull team announced that they had decided to retain him for next year as team-mate to Verstappen. A result which the likeable racer has thoroughly deserved after an impressive rookie year with a mid-season promotion from sister team Toro Rosso to the main Red Bull outfit. Toro Rosso also confirmed that it will be retaining its current driver line-up of Daniil Kvyat and Pierre Gasly for 2020.

Friday’s opening free practice session was rain affected and saw Albon go fastest on intermediate specification tyres before he crashed heavily whilst preparing for a late run on slicks. There was no subsequent restart and the Red Bull driver remained on top of the timesheets ahead of Mercedes’ Valtteri Bottas and the Ferrari of Sebastian Vettel, with this year’s champion Lewis Hamilton failing to set a time. Later on Friday though Ferrari came good as Vettel and team-mate Charles Leclerc outpaced everyone else, their closest challengers being Verstappen and the Mercedes duo. 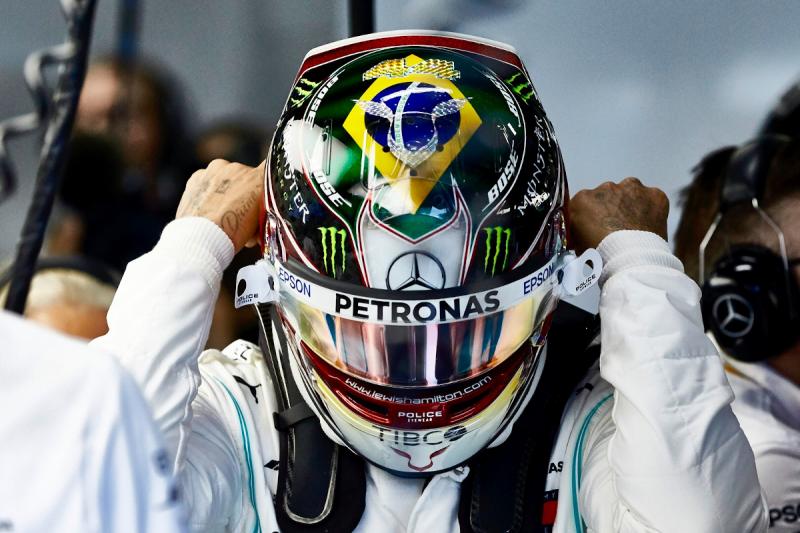 Hamilton’s eye-catching helmet design for Brazil, including references to the country’s flag and Senna
Noon local time on Saturday saw the start of final practice and it was Hamilton who took the honour of being the quickest driver on track, if only 0.026s ahead of his nearest rival Verstappen and with the brace of red Ferraris the best of the rest.

So often in the past the race winner at Interlagos has started from the front row of the grid and thus qualifying was even more important than ever. Verstappen and Vettel slugged it out for pole position, with the Dutch charger emerging on top and with Hamilton third fastest ahead of Leclerc. However, prior to the start of the Brazilian weekend Ferrari had opted to give Leclerc a new engine and, as this was his fourth of the season, the young Monegasque star received a ten place grid penalty, dropping him to 14th.

McLaren’s Carlos Sainz had an afternoon to forget as an ignition wiring issue caused a loss of power for the Spaniard in the first part of qualifying and he failed to set a time, leaving him destined to start last for the following day’s Grand Prix. This apart, the two Williams cars were sadly again the slowest on track, but highly promising young British rookie George Russell again outqualified his team-mate Robert Kubica for the 20th time in as many races. The Pole has done an amazing job simply to return to F1 after suffering life-threatening multiple injuries in a local Italian rally back in 2011, but he is not being retained by Williams for 2020. 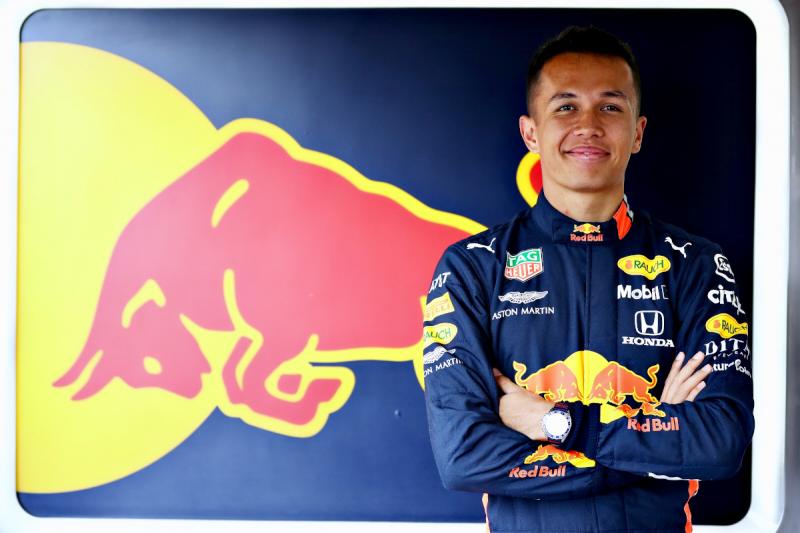 Alex Albon, newly signed by Red Bull for next year, missed out on a first podium finish after late contact from Hamilton
Sadly we don’t have a Brazilian driver currently competing in Formula 1, but the local fans are still so passionate about the sport they have long loved, with memories of their iconic hero Ayrton Senna still vivid. As a result the circuit was packed and a lively mood pervaded as the race start approached.

The track is a relatively short anti-clockwise affair where a heady combination of pure driving ability and sheer engine grunt always pays dividends and after the red lights went out Verstappen sprinted into an immediate lead whereas Vettel lost out to Hamilton at the opening lefthander.

On lap nine Daniel Ricciardo’s Renault and Kevin Magnussen’s Haas collided, with the latter punted off the track and the former subsequently receiving a five second penalty. Meanwhile Leclerc was flying and by one tour later was up from 14th to sixth position.

Out front Verstappen led from Hamilton, Vettel and Bottas before the leading duo pitted, switching to further sets of soft tyres and therefore committing both to at least one more stop later in the Grand Prix. The Dutch racer had been delayed leaving the pitlane by the Williams of Kubica, earning the Polish driver a five second penalty and more crucially handing track position to Hamilton. However, just one lap later Verstappen shot back ahead of the British ace at Turn 1. 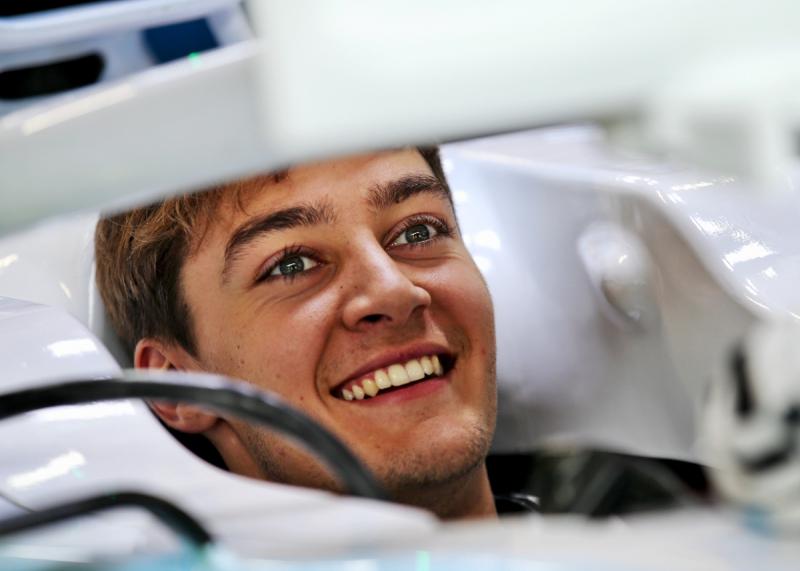 Superb British rookie George Russell could still smile in Brazil despite a tough season in the uncompetitive Williams
By the time all the leading contenders had made their first pit stops Verstappen led from Hamilton and Vettel and following all their second trips down the pitlane the same front trio still occupied the podium places ahead of Leclerc, Bottas and Albon. Disaster was about to strike though for the unlucky Bottas as he was forced into premature retirement with a badly smoking Mercedes, the likeable Finn complaining of a loss of power.

Recovery of his car brought out the Safety Car and Verstappen and Leclerc were brought in by their respective Red Bull and Ferrari teams for “cheap” pitstops. Unlike Mercedes who opted to keep Hamilton on track, which gave him the lead.

At the restart Verstappen immediately took his revenge by sweeping back ahead at Turn 2 and a brilliant piece of driving by Albon saw him overtake both Ferraris, promoting him to third place.


Also by Graham Read...
Bottas On Top In Austrian ThrillerInspirational Zanardi Severely Injured In Italian Cycle RaceChampion Russell Dominates Again In Canadian FinaleRacy Russell Makes It A Hat TrickFormula 1 Confirms This Season’s Opening Eight Races
As if this all wasn’t enough action for one day, Ferrari suffered a far worse nightmare on lap 66 as, after Leclerc had got the better of Vettel the pair touched slightly on the sprint down the back straight as the latter fought back and both cars were forced into retirement with tyre and suspension damage. With tyre debris littering the circuit the Safety Car was called back into action and Mercedes brought Hamilton in for a third stop and more soft “boots” for his silver flying machine.

When the Safety Car returned down the pitlane we had a two lap sprint to the chequered flag and lo and behold there was yet more contentious drama as third placed Hamilton tipped second placed Albon into a spin, losing the Red Bull driver his real chance of a first ever podium finish in F1.

As the field swept past the finishing line Verstappen took a thoroughly deserved victory and, following all the carnage, there was a superb second place finish for Toro Rosso’s Pierre Gasly ahead of Hamilton.

This wasn’t the conclusion of the day’s thrilling events though as a subsequent five second penalty for Hamilton for causing the collision with Albon dropped him from third to seventh place, meaning that Sainz, who had started dead last, ended up finishing third for McLaren. Alfa Romeo had a day to remember too with fine fourth and fifth place finishes for the now 40 year old Kimi Räikkönen and his team-mate Antonio Giovinazzi.

Bottas set the fastest race lap, but was denied the extra point due to not finishing in the top ten.

Wow. What a race. Time now for all to regroup back at their European HQs before the season finale at Abu Dhabi’s Yas Marina circuit in a fortnight’s time. A day/night affair in the Middle East amidst multi-coloured hotels and expensive boats bobbing on the surrounding water.