Following the inaugural race in Miami a fortnight ago, this weekend Formula 1 returned to Europe and a more traditional track, the Circuit de Barcelona-Catalunya, where Red Bull’s Max Verstappen emerged victorious from this afternoon’s Spanish Grand Prix following the retirement of Ferrari’s runaway leader Charles Leclerc. 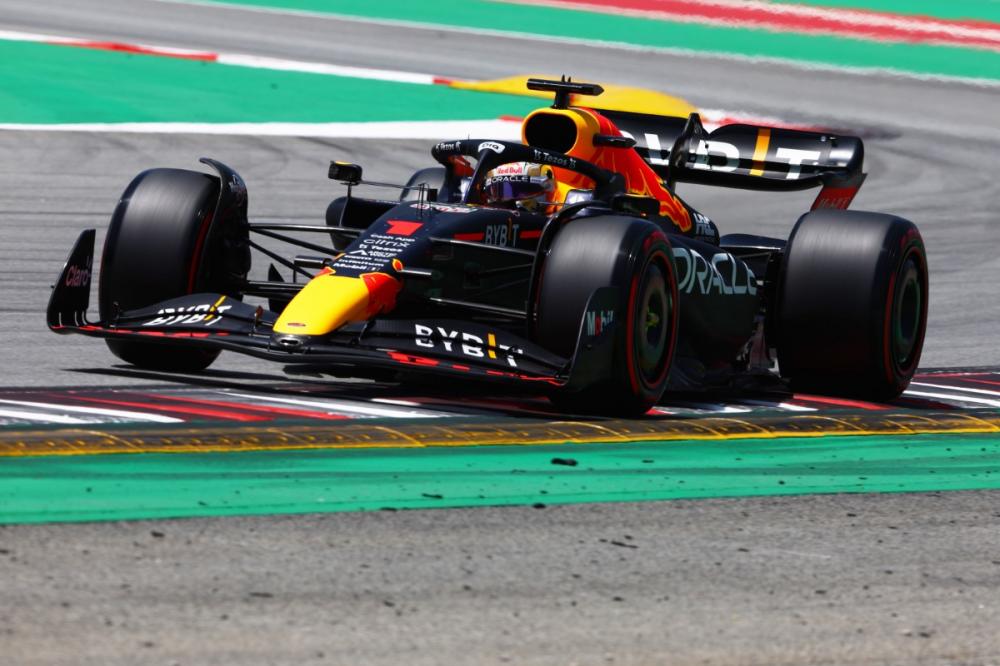 Max Verstappen battled DRS gremlins en route to victory
This event marked the F1 debut for Portugal’s Eduardo Freitas as one of the two new Race Directors this season, the other being Niels Wittich from Germany who was also present to assist his colleague. Overtaking at the Spanish venue has always been difficult, with the main opportunity being the approach to Turn 1, but at least the teams all had plenty of recent data to call upon as the opening pre-season test had been held here. This also enabled each outfit to check whether it had succeeded in improving the performance of its car since then, a crucial factor for Mercedes in particular.

Meanwhile the new FIA President, Mohammed bin Sulayem, had suggested last weekend that the previous Race Director Michael Masi may yet at some point return to work in F1 for the FIA, news which was not at all well received by Mercedes who had sought his removal after events in Abu Dhabi at the end of the 2021 campaign.

It was the Ferraris who set the pace in first practice, with Leclerc beating his team-mate Carlos Sainz by a mere 0.079s and with Red Bull’s Verstappen the best of the rest although his quickest lap was spoilt due to traffic.
The President also confirmed that he is still insistent on the enforcement of the longstanding regulation requiring drivers not to wear any jewellery or non-regulation underwear whilst in their cars for safety reasons, a move publicly supported this week by former F1 driver Alex Wurz who is the current Chairman of the Grand Prix Drivers’ Association. These rules are routinely accepted in other racing categories, but the move to enforce them in Formula 1 has created a bit of a reaction and mainly from Sir Lewis Hamilton who likes to wear various items of jewellery, including when ontrack. The multiple champion reluctantly agreed in Miami to take off his earrings and was given a three week exemption until next weekend’s Monaco event to have other less easily detachable ones removed, including his nose stud. However, Hamilton has remained adamant that his nose stud will never be removed and, if the standoff between the driver and the FIA continues come Monaco and beyond, he will face increasing fines and points on his racing licence plus even a ban. 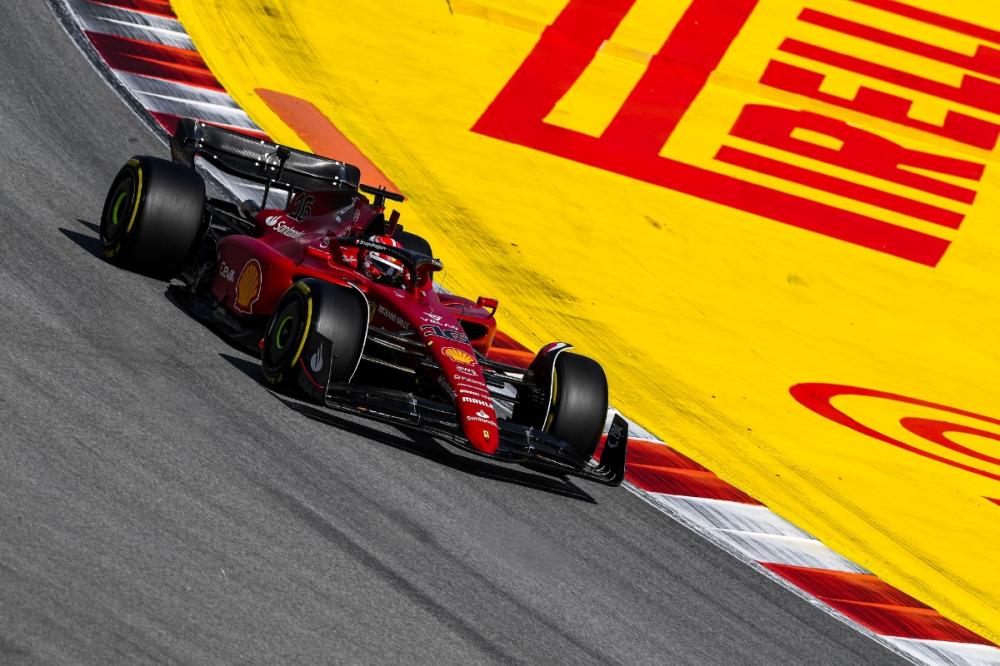 Charles Leclerc had looked imperious until his Ferrari let him down
There was confirmation last Wednesday that Formula 1 would not replace the cancelled Russian Grand Prix on 25 September, leaving this year’s number of F1 weekends as 22. Qatar, Hockenheim and even a second race in Singapore had all been potential candidates, but ultimately financial and logistical issues lay behind the decision made. This will leave two free weekends after the final European race at Monza in Italy on 11 September before six flyaway events follow, starting with Singapore on 2 October. Whilst on the subject of calendars, the F1 CEO Stefano Domenicali announced yesterday that with effect from 2023 real efforts will be made to try to group races better by region to improve the sport’s sustainability credentials and reduce the massive amount of freight and personnel movements around the world. The recent visit to Miami for its inaugural Grand Prix, positioned between races in Italy and Spain, and the forthcoming trio of events in Azerbaijan, Canada and Britain are great examples of the need for improvement after discussions with the affected race promoters.

It was the Ferraris who set the pace in first practice, with Leclerc beating his team-mate Carlos Sainz by a mere 0.079s and with Red Bull’s Verstappen the best of the rest although his quickest lap was spoilt due to traffic. Mercedes was one of the many teams introducing various updates in Spain and they seemed to work as George Russell went fourth fastest, if significantly still over three quarters of a second adrift of Leclerc. Aston Martin had its revised AMR22 cleared by the FIA after it had appeared to copy various aspects of Red Bull’s RB18. Later on Friday in the second practice period Leclerc remained at the top of the timesheets, but Mercedes also shone, with Russell second just ahead of his team-mate Hamilton and Sainz. Prior to yesterday’s final practice session Ferrari had to change Sainz’s chassis due to a fuel system problem and it was Leclerc who again went quickest ahead of Verstappen, Russell and Hamilton. 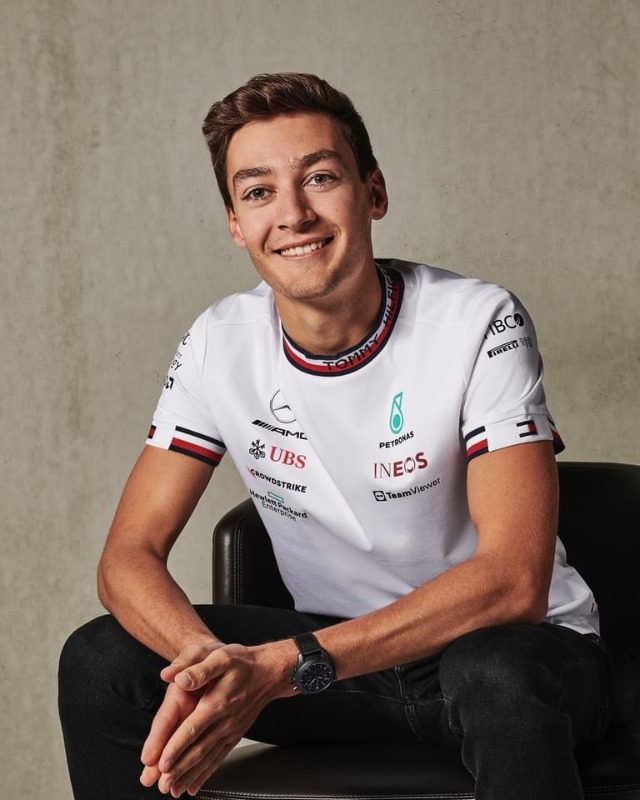 Mercedes’ George Russell drove superbly to claim the final podium position
With overtaking historically being so difficult at this track and the race usually having been won from the front row on the grid it was vital to qualify well and the Drivers’ Championship leader Leclerc recovered from a spin during his first effort in Q3 to set a blistering pole position lap. In contrast, Verstappen suffered a DRS system malfunction during his final timed lap and had to settle for second place ahead of local hero Sainz and Russell, who impressively put his Mercedes on the second row, whilst Red Bull’s Sergio Pérez and Hamilton completed the top six starters. 23 year old Mick Schumacher deserved a special mention too after getting into Q3 for the first time in his still fledgling F1 career at a circuit where his father Michael won on six occasions, meaning he achieved his best F1 starting position to date in his Haas.

The air and track temperatures were particularly hot again today as the three pm local time start neared with a welcome head wind blowing back down the pit straight from Turn 1 and, in addition to sheer pace, tyre management was clearly going to be a crucial factor. It’s a 600 metre blast from the front of the grid to the opening righthander and when those famous red lights went out it was Leclerc and Verstappen who led the way as Russell quickly got the better of a slow-starting Sainz. There was opening lap drama to their rear though when Haas’ Kevin Magnussen and Hamilton made contact, with the Dane able to continue but the British driver forced to make an immediate pitstop and rejoin last. A dejected Hamilton told the team he wanted to pull out of the race, but the team instructed him to continue, a policy which worked out well in the end. 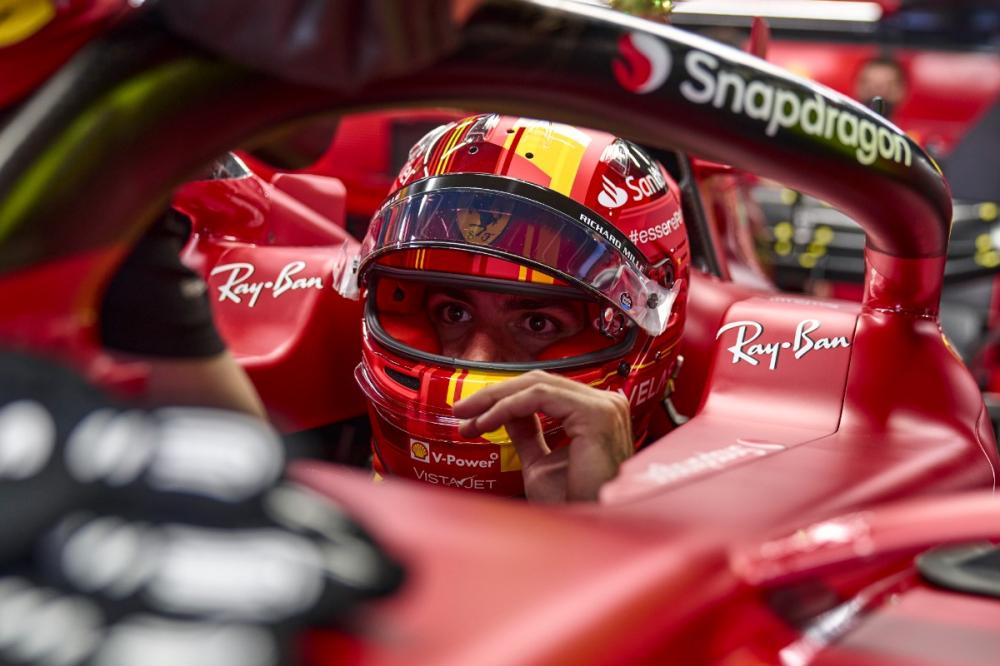 Home hero Carlos Sainz finished only fourth, but it could have been worse
In the early stages of the race both Sainz and Verstappen had excursions into the Turn 4 gravel after getting caught out by the wind, but as the race settled Leclerc led from Russell, with Red Bull choreographing a move which allowed Verstappen past Pérez into third place. The Ferrari driver gradually extended his lead whilst Russell and Verstappen made their opening pitstops on lap 14 and, despite the Red Bull team leader suffering with an intermittent DRS system malfunction, the Dutch racer applied intense pressure to Russell. Leclerc made his own first stop on lap 22. As Verstappen continued to harry second placed Russell Leclerc’s race came to a very premature end five tours later when the Monégasque driver suffered a terminal power loss and was forced to retire. This unexpected development left Russell leading ahead of the Red Bull duo and, when Verstappen stopped again, Pérez swept past Russell into the lead. When Russell then made his own second stop he rejoined the circuit in third position behind the Red Bulls.

Next up in just a week’s time comes the Monaco Grand Prix, long known as the jewel in Formula 1’s crown.
After Verstappen had made a third stop he rejoined three seconds behind his team-mate and the Milton Keynes based team soon asked “Checo” to let Verstappen past, an instruction the Mexican clearly didn’t like but one which he duly followed as a fine team player. A third stop for Russell dropped him to fourth behind Alfa Romeo’s Valtteri Bottas, but the young charger quickly reclaimed the position. Meanwhile, Hamilton had been steadily making progress through the field and with six laps remaining passed Sainz for fourth. However, with the chequered flag almost in sight both Mercedes drivers were instructed to lift and coast their cars as much as possible due to fears of a double retirement caused by power unit water leaks. This enabled Sainz to reclaim the position he had lost to Hamilton, much to the delight of the home fans, but Russell maintained third position to join Verstappen and Pérez on the post race podium, whilst Sainz, Hamilton and Bottas completed the top six finishers. The extra point for the fastest lap of the race was earned by Pérez and today’s result promoted Verstappen and Red Bull to the top of the Drivers’ and Constructors’ Championship standings respectively. 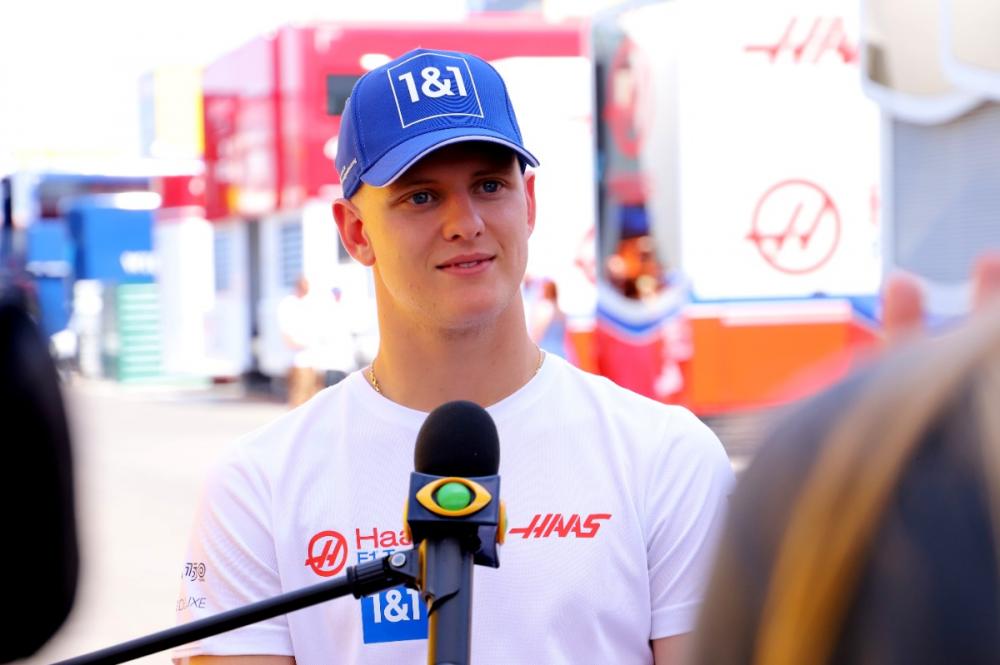 Mick Schumacher achieved his best ever F1 starting position in his Haas
Next up in just a week’s time comes the Monaco Grand Prix, long known as the jewel in Formula 1’s crown. Yes, the tight confines of the iconic street circuit make overtaking extremely difficult and a strong qualifying performance and flexible strategy are crucial, but I know from personal experience over many years that Monaco on race day has such a special atmosphere and still very much deserves its place on the calendar. Let’s hope that events next weekend keep this thrilling season rolling onwards.